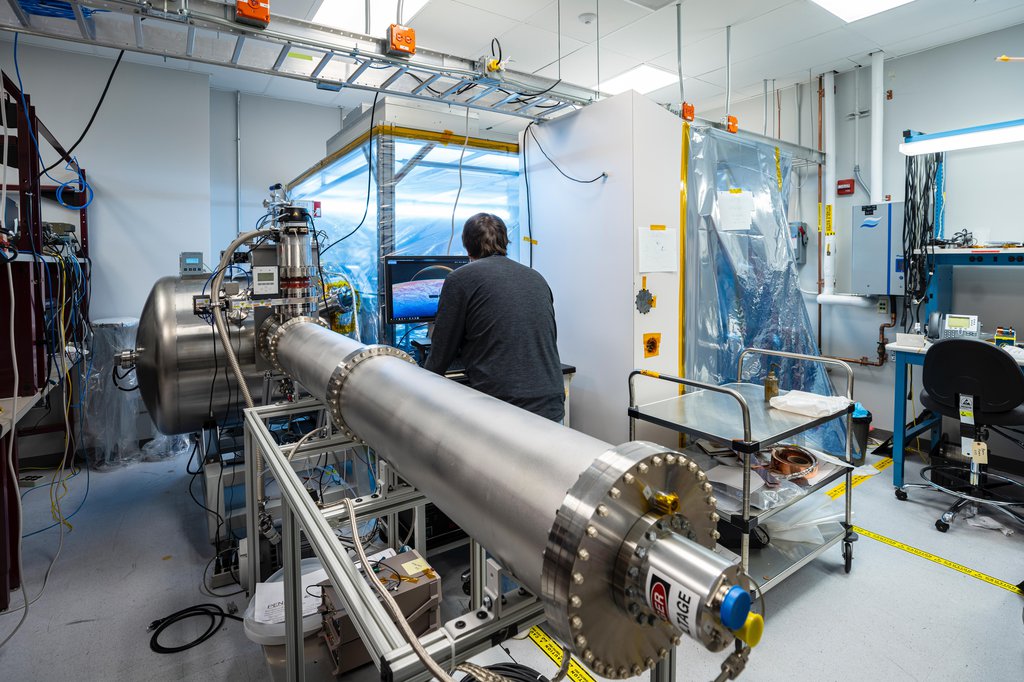 Included in the payload of science instruments for NASA's Europa Clipper is the Plasma Instrument for Magnetic Sounding (PIMS). Scientists will use PIMS to study the characteristics of plasma around Europa to better understand the moon's ice-shell thickness, ocean depth, and ocean salinity. PIMS will have four sensors, called Faraday cups, to measure the electrical current produced by charged particles (or plasma) as they strike a detector plate inside each sensor.

In this photo, the Plasma Instrument Calibration Chamber at the Johns Hopkins Applied Physics Laboratory (APL) in Laurel, Maryland, recreates the plasma environments that PIMS and other instruments will encounter in space. The equipment in this lab simulates these environments with ion beams that reproduce plasma energy ranges found at Jupiter and Europa.

Once PIMS is fully assembled in the clean room attached to the chamber, the team will direct these ion and electron beams into the Faraday cup sensors for calibration. This will be used specifically to simulate the plasma in Europa's ionosphere and Jupiter's magnetosphere, which PIMS will later measure directly.

With an internal global ocean twice the size of Earth's oceans combined, Europa may have the potential to harbor life. NASA's Europa Clipper spacecraft will swoop around Jupiter on an elliptical path, dipping close to the moon on each flyby to collect data. Understanding Europa's habitability will help scientists better understand how life developed on Earth and the potential for finding life beyond our planet.