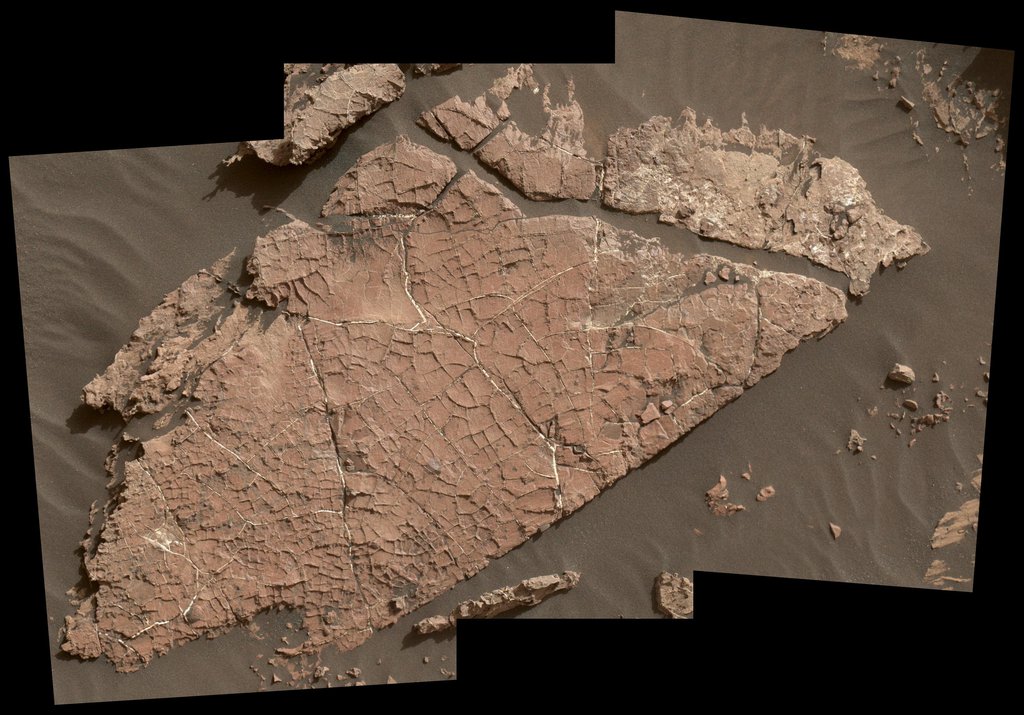 The network of cracks in this Martian rock slab called "Old Soaker" may have formed from the drying of a mud layer more than 3 billion years ago. The view spans about 4 feet (1.2 meters) left-to-right and combines three images taken by the Mars Hand Lens Imager (MAHLI) camera on the arm of NASA's Curiosity Mars rover.

Mud cracks would be evidence of a time when dry intervals interrupted wetter periods that supported lakes in the area. Curiosity has found evidence of ancient lakes in older, lower-lying rock layers and also in younger mudstone that is above Old Soaker.

MAHLI was positioned about 3 feet (90 centimeters) above the surface when it took the component images on Dec. 31, 2016, during the 1,566th Martian day, or sol, of Curiosity's work on Mars. This observation was planned as part of assessing a hypothesis that the target preserves evidence of drying mud. The location is within an exposure of Murray formation mudstone on lower Mount Sharp inside Gale Crater.

The slab bears a network of four- and five-sided polygons about half an inch to 1 inch (1 to 2 centimeters) across, which matches the pattern commonly formed when a thin layer of mud dries. Some edges of the polygons are ridges of material the same color as the surrounding rock. This could result from a three-step process after cracks form due to drying: Wind-blown sediments accumulate in the open cracks. Later, these sediments and the dried mud become rock under the pressure of multiple younger layers that accumulate on top of them. Most recently, after the overlying layers were eroded away by wind, the vein-filling material resists erosion better than the once-muddy material, so the pattern that began as cracks appears as ridges.

Note that some of the cracks contain material much brighter than the surrounding rock. These are mineral veins. Curiosity has found such bright veins of calcium sulfate in many rock layers the rover has investigated. These veins form from circulation of mineral-laden groundwater through underground cracks. Rover-team scientists suggest that a likely scenario for the history of Old Soaker is more than one generation of fracturing: mud cracks first, with sediment accumulating in them, then a later episode of underground fracturing and vein forming.

The target rock's name comes from the name of an island off the coast of Maine. The names informally assigned by the rover team to features in the area of lower Mount Sharp that includes this slab are from a list of islands, hills and other sites in or near Maine's Bar Harbor.