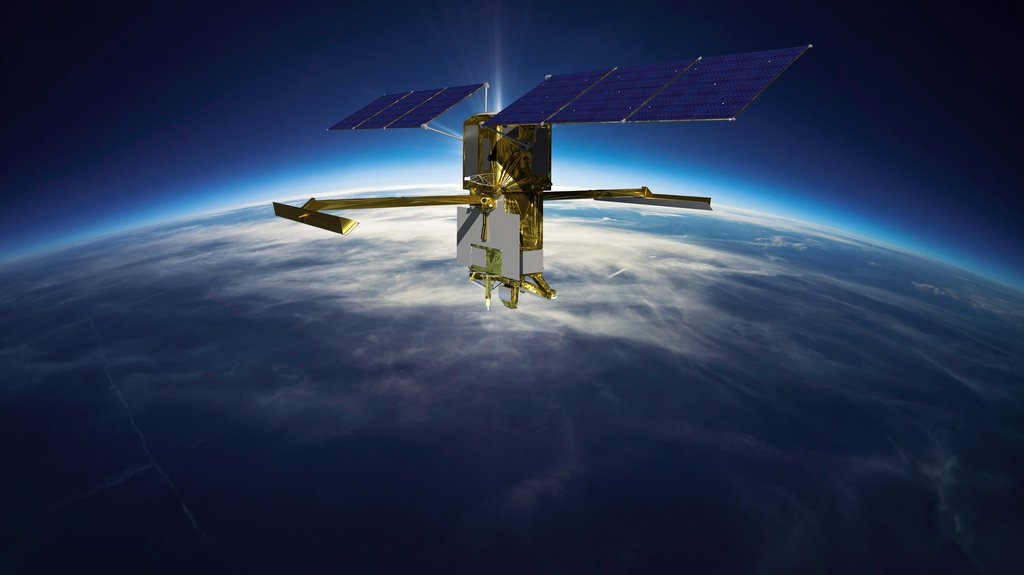 This illustration depicts the Surface Water and Ocean Topography (SWOT) satellite with solar arrays fully deployed. Measuring 48.8 feet (14.9 meters) in length with an area of 335 square feet (31 square meters), the two arrays will remain pointed at the Sun via small motors to provide 8 kilowatts of power; the spacecraft has a 1.5-kilowatt total power demand.

The scientific heart of the SWOT satellite is the Ka-band Radar Interferometer (KaRIn) instrument, which will measure the height of water in Earth's lakes, rivers, reservoirs, and ocean. To do that, KaRIn will transmit radar pulses to Earth's surface and use two antennas – seen to the left and right of the spacecraft bus – to triangulate the return signals that bounce back. Mounted at the ends of a boom 33 feet (10 meters) long, the antennas will collect data over two swaths of Earth's surface at a time, each of them 30 miles (50 kilometers) wide and located on either side of the satellite.

KaRIn will operate in two modes: A lower-resolution mode over the ocean will involve significant onboard processing of the data to reduce the volume of information sent during downlinks to Earth; a higher-resolution mode will be used mainly over land.

This science instrument was provided by NASA's Jet Propulsion Laboratory. The French space agency Centre National d'Études Spatiales (CNES) and Thales Alenia Space built the radio-frequency subsystem, a key part of this instrument. The development of the Duplexer, a high-power switching system that is part of the radio-frequency unit, was funded by the UK Space Agency at Honeywell UK. The Canadian Space Agency contributed the extended interaction klystrons, which are at the heart of the instrument's high-power transmitter assembly.