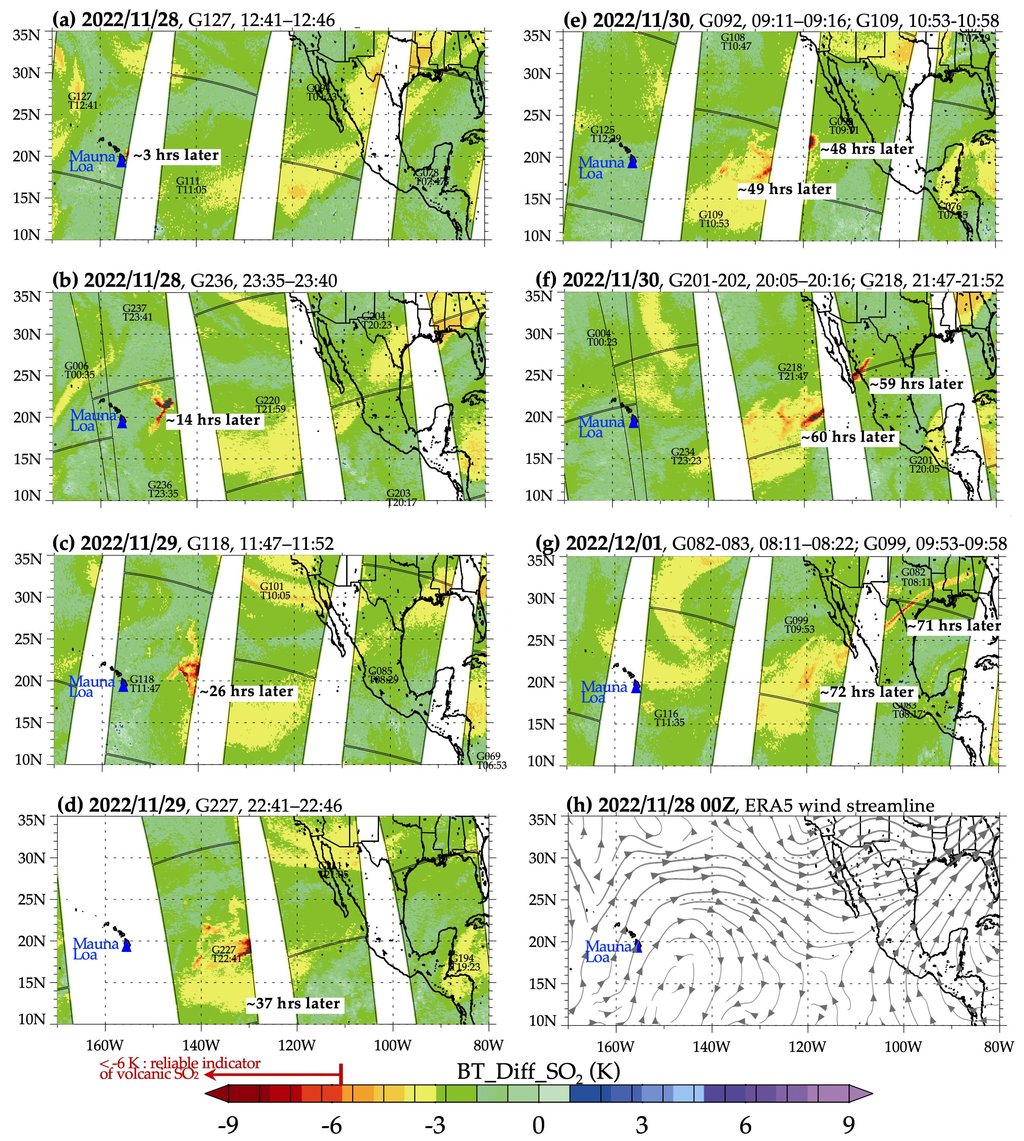 Starting from the upper left frame — captured at 2:41 a.m. HST (12:41 UTC) on Nov. 28, around three hours after the eruption began — a red patch that represents an SO₂ plume can be seen east of the volcano, which is shown as a blue triangle, then moving east and diffusing through subsequent frames. By 71 hours after the eruption, the eastern part of the plume is over the southeastern United States.

SO₂ can be harmful to the human respiratory system when inhaled. In the atmosphere, it can also lead to the formation of other gaseous sulfur oxides (SOₓ). These substances can react with other chemicals to form particulate-matter pollution, which can cause breathing problems, contribute to acid rain, and reduce sky visibility.

AIRS measures the amount of radiation reaching the instrument from the top of the atmosphere at more than 2,000 different wavelengths. Brightness temperature (BT) is a measure of the amount of radiation, and the images show the difference between BT observed at two different wavelengths. One of the wavelengths is sensitive to atmospheric SO₂, and the other is not, so the difference between the two measurements can give a reliable signal of volcanic SO₂ plumes.

A fully automated volcanic plume detection rapid response system that uses AIRS data has been developed at the Jet Propulsion Laboratory in Southern California. This tool is available at the AIRS Rapid Response website, where detections of the most recent volcanic SO₂, dust, and clouds, in visible and infrared images, are updated in near real-time when a volcanic event anywhere on Earth triggers the system. AIRS historical detections of volcanic SO₂ and dust are archived on the site at https://airs.jpl.nasa.gov/volcanic_plumes/.

AIRS, in conjunction with the Advanced Microwave Sounding Unit (AMSU), senses emitted infrared and microwave radiation from Earth to provide a three-dimensional look at the planet's weather and climate. Working in tandem, the two instruments make simultaneous observations down to Earth's surface. With more than 2,000 channels sensing different regions of the atmosphere, the system creates a global map of atmospheric temperature and humidity, cloud amounts and heights, greenhouse gas concentrations, and many other atmospheric phenomena. Launched into Earth orbit in 2002 aboard NASA's Aqua spacecraft, the AIRS and AMSU instruments are managed by JPL, under contract to NASA. JPL is a division of Caltech.