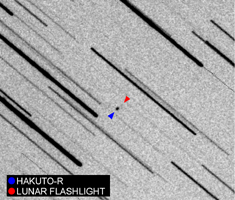 These images show two observations of NASA's Lunar Flashlight and the private ispace HAKUTO-R Mission 1 as the two spacecraft, seen as a pair of dots, journey to the Moon. In Figure A, the images have been joined sequentially to create an animated GIF. The larger HAKUTO-R lunar lander appears as a large black dot, whereas the smaller Lunar Flashlight, which is about the size of a briefcase, appears as a fuzzy grouping of gray pixels. Stars appear as long trails.

Both missions launched on Dec. 11, 2022, aboard a SpaceX Falcon 9 rocket, with Lunar Flashlight and HAKUTO-R spacecraft subsequently deploying from it. Astronomer Vishnu Reddy and graduate student Adam Battle, both from University of Arizona's Lunar and Planetary Laboratory and Space4 Center, used a remote 0.5-meter (1.6-foot) telescope in Australia to track the small spacecraft. They used data from the Horizons System at NASA's Jet Propulsion Laboratory in Southern California to find their position in the sky.

These images were acquired about 39 hours after launch, when the two spacecraft were 145,000 miles (235,000 kilometers) from Earth. Black and white in the images have been inverted so that the brighter the object, the darker it is. To detect the faint reflected light from both spacecraft, they stacked 80 images, each from a 10-second exposure (for a total exposure time of 800 seconds), based on the rate of motion and direction of the spacecraft. This method resulted in stars appearing as long trails and the two spacecraft appearing as dots.

Lunar Flashlight is a small satellite mission planning to use lasers to seek out surface water ice inside permanently shadowed craters at the Moon's South Pole. The small satellite is expected to reach its science orbit around the Moon in April 2023.

For more information about the Lunar Flashlight launch, and how to follow along with the mission, go to: https://www.jpl.nasa.gov/news/nasas-lunar-flashlight-has-launched-follow-the-mission-in-real-time