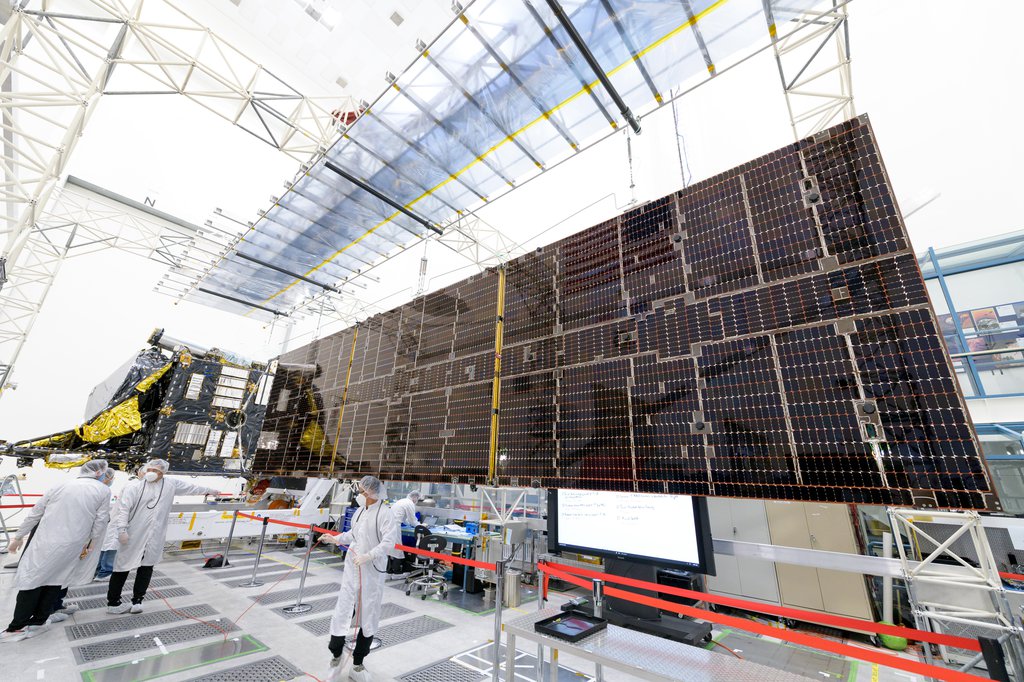 Engineers at NASA's Jet Propulsion Laboratory in Southern California successfully deployed a solar array installed on the agency's Psyche spacecraft. It was one of two deployed during testing in the Lab's High Bay 2 clean room in late February 2022.

The twin arrays are together about 800 square feet (75 square meters) – the largest ever deployed at JPL. Part of a solar electric propulsion system provided by Maxar Technologies, they will power the spacecraft on its 1.5 billion-mile (2.4 billion-kilometer) journey to the large, metal-rich asteroid Psyche.

Only the three center panels on each five-panel, cross-shaped array can be deployed at JPL due to the limitations of the gravity-offload fixture and the opposing direction of rotation of the cross panels. Deployment of the two cross panels was previously performed at Maxar with different equipment. After further spacecraft testing is completed at JPL, the arrays will be removed and returned to Maxar in order to repeat the cross-panel deployments, make any final repairs to the solar cells, and test overall performance. The arrays then get shipped from Maxar to NASA's Kennedy Space Center in Florida, where they will be reintegrated onto the spacecraft in preparation for launch in August 2022.

About an hour after launch, Psyche will deploy the arrays sequentially, first unfolding the three lengthwise center panels, then the two cross panels on one wing before repeating the process with the other wing. Each array takes about 7 ½ minutes to unfurl and latch into place.