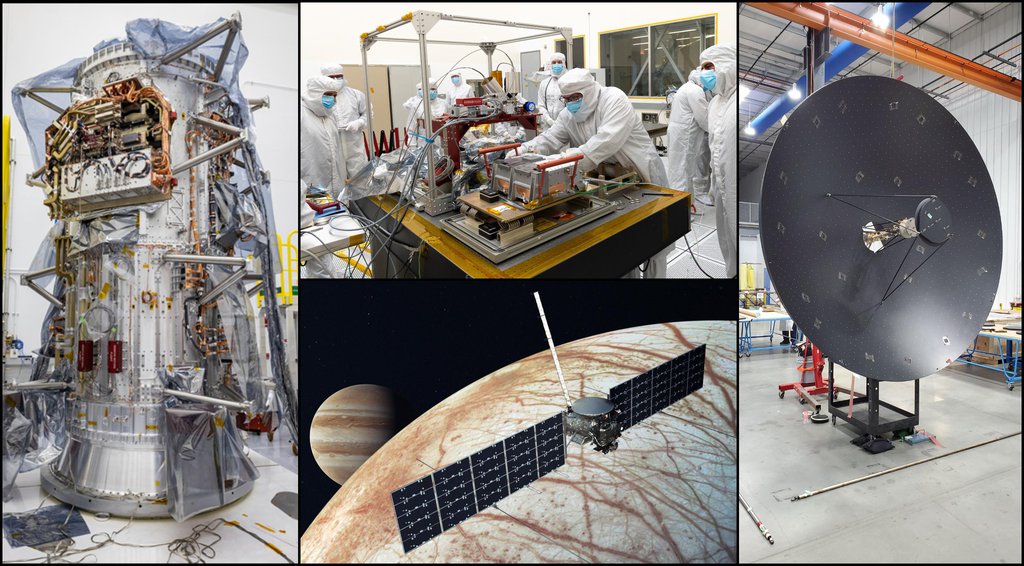 Science instruments and other hardware for NASA's Europa Clipper spacecraft will come together in the mission's final phase before launching to Jupiter's icy moon Europa in 2024.

Seen in this photo collage, clockwise from left:

The propulsion module for NASA's Europa Clipper (PIA24900): This is the main body of the spacecraft. It is nearing completion at Johns Hopkins Applied Physics Laboratory (APL) in Laurel, Maryland. The module consists of two stacked cylinders that stand almost 10 feet (3 meters) high and hold the propulsion tanks and rocket engines that will adjust and change Europa Clipper's trajectory once it leaves Earth's atmosphere on its path toward Jupiter's icy moon Europa.

The ultraviolet spectrograph, called Europa-UVS (PIA24897): It was the first of the spacecraft's science instruments to be delivered to NASA's Jet Propulsion Laboratory in Southern California. In this photo, captured in February 2022, the instrument's custom testing equipment is seen at left, with a boxy, red frame. The instrument itself is seen at right. Engineers and technicians are shown examining and testing it, upon arrival at JPL. Europa-UVS will search above the surface of Europa for signs of potential plumes that may be venting subsurface water into space.

The massive high-gain antenna (PIA24899): It is nearly 10 feet (3 meters) wide and will be integrated along with other telecommunications hardware into the spacecraft's propulsion module. The antenna will download science data and allow ground controllers to send and receive commands and data between Earth and the spacecraft in Jupiter orbit – more than a million times farther from Earth than the International Space Station's orbits.

NASA's Europa Clipper spacecraft (illustration)(PIA24321): Europa Clipper will carry a broad suite of instruments into orbit around Jupiter and conduct multiple close flybys of Europa to gather information on the moon's atmosphere, surface, and interior.