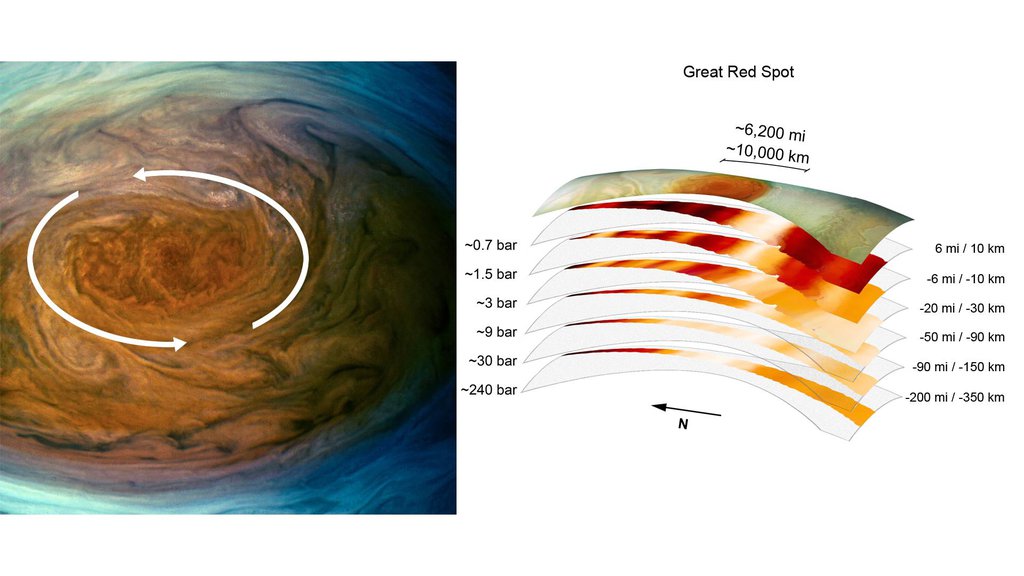 The annotated image on the left from the JunoCam imager aboard NASA's Juno spacecraft depicts the anticyclonic (counterclockwise) rotation of Jupiter's Great Red Spot. The graphic on the right highlights the large-scale structure of the Great Red Spot as seen by the spacecraft's microwave radiometer (MWR) instrument. Data for the image and the microwave radiometer results were collected during a low flyby of Jupiter which took place on July 11, 2017.

The radiometer data was acquired from the six channels of MWR. Each MWR channel peers progressively deeper below the visible cloud tops. In fact, the MWR instrument enables Juno to see deeper into Jupiter than any previous spacecraft or Earth-based observations.

Unlike Earth, which as a solid surface, Jupiter is a gas giant with no discernable solid surface. So the planetary science community has defined the "base" of Jupiter's atmosphere to be defined as the location where its pressure is equivalent to is 1 bar. The bar is a metric unit of pressure which at 14.5 pounds per square inch is slightly less than the average atmospheric pressure on Earth at sea level. The numbers noted to the left of each layer of MWR data indicates the pressure (in bars) that is present at the location in the atmosphere where the MWR reading occurred.

The distance measurements to the right of each layer of MWR data provides the distance – either above or below the 1 bar level – that the corresponding MWR measurement was taken.

For context, the top layer in the figure is a visible-light image depicting Jupiter's different levels of clouds, with an average altitude about 6 miles above the 1 bar pressure region.

More information about Juno is online at https://www.nasa.gov/juno and https://missionjuno.swri.edu.