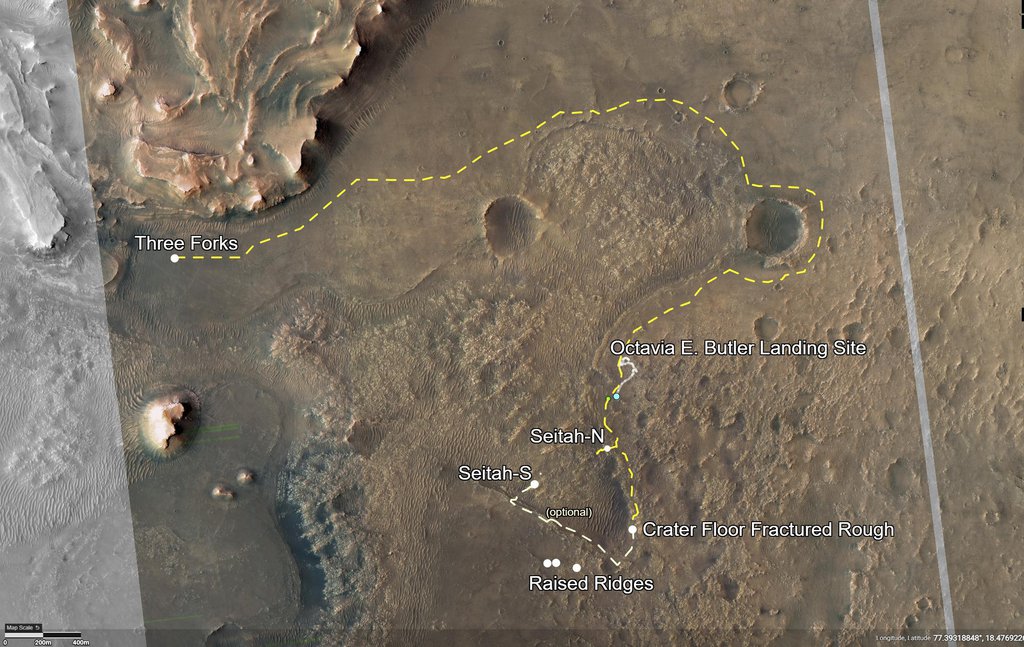 This annotated image of Mars' Jezero Crater depicts the route NASA's Perseverance rover will take during its first science campaign – as well as its path to the location of its second science campaign. The image was provided by the High Resolution Imaging Experiment (HiRISE) aboard NASA's Mars Reconnaissance orbiter.

Perseverance's first science campaign sends the rover south and west of the Octavia E. Butler Landing Site to investigate and sample several of the deepest, and potentially oldest, accessible geologic units in Jezero Crater – the "Séítah" unit (which in Navajo language means "amidst the sand"), and the "Cratered Floor Fractured Rough." At the completion of the science campaign, Perseverance will return to the "Octavia E. Butler" landing site on its way north, then head west toward the location where its second science campaign will begin.

The first science campaign (depicted with yellow hash marks) begins with the rover performing an arching drive southward from its landing site to Séítah-North (Séítah-N). At that point the rover will travel west a short distance to an overlook where it can view much of the Séítah unit. The "Séítah-N Overlook" could also become an area of scientific interest – with Perseverance performing a "toe dip" into the unit to collect remote-sensing measurements of geologic targets.

Once its time at the Séítah-N Overlook is complete, Perseverance will head east, then south toward a spot where the science team can study the Crater Floor Fractured Rough in greater detail. The first core sample collected by the mission will also take place at this location.

After Cratered Floor Fractured Rough, the Perseverance rover team will evaluate whether additional exploration (depicted with light-yellow hash marks) farther south – and then west – is warranted.