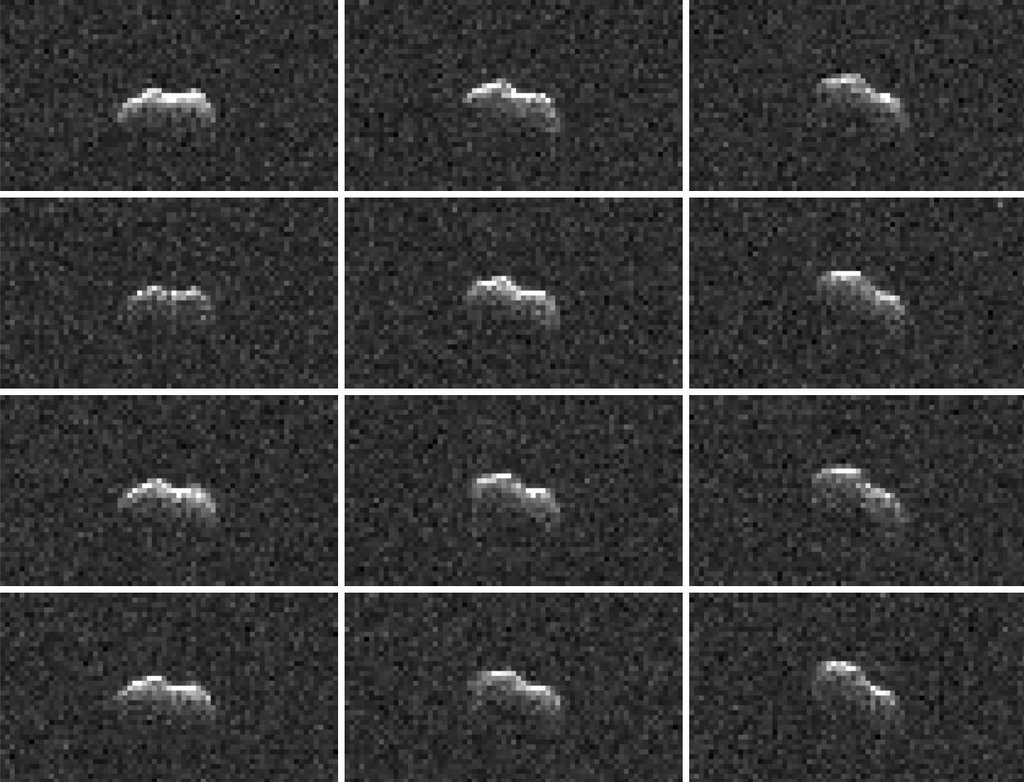 On March 21, 2021, the large asteroid 2001 FO32 made a close approach with our planet, passing at a distance of about 1.25 million miles (2 million kilometers) — or 5 1/4 times the distance from Earth to the Moon. While there was no risk of the near-Earth asteroid colliding with Earth as its orbit is very well known, scientists at NASA's Jet Propulsion Laboratory in Southern California took the opportunity to capture these radar images of the asteroid as it tumbled past.

Using NASA's 34-meter (111.5-feet) Deep Space Station 13 (DSS-13) radio antenna at the Deep Space Network's Goldstone Deep Space Communication Complex near Barstow, California, radio signals were transmitted to 2001 FO32. The signals then bounced off the surface of the asteroid and were received by the 100-meter (328-feet) Green Bank Telescope in West Virginia. Such radar observations can offer additional insight into the asteroid's orbit, provide a better estimate of its dimensions and rotation rate, and help glimpse surface features (like large boulders or craters).

Other radar observations were carried out by scientists using the 34-meter DSS-43 antenna at the Deep Space Network's Canberra Deep Space Communication Complex in Australia. Along with the Commonwealth Scientific and Industrial Research Organisation's Australia Telescope Compact Array near Narrabri in New South Wales, both antennas worked together to track 2001 FO32.

Asteroid 2001 FO32 was discovered in March 2001 by the Lincoln Near-Earth Asteroid Research (LINEAR) program in Socorro, New Mexico, and had been estimated, based on optical measurements, to be roughly 3,000 feet (1 kilometer) wide. In more recent follow-up observations by NEOWISE, 2001 FO32 appears to be faint when observed in infrared wavelengths, which suggests the object is likely less than 1 kilometer in diameter. Analysis by the NEOWISE team shows that it is between 1,300 to 2,230 feet (440 to 680 meters) wide. Further analysis of data from the radar campaign will better refine the size of the asteroid and increase the precision of its orbital calculations.

For more information about 2001 FO32 and observing campaign, read: https://www.jpl.nasa.gov/news/asteroid-2001-fo32-will-safely-pass-by-earth-march-21