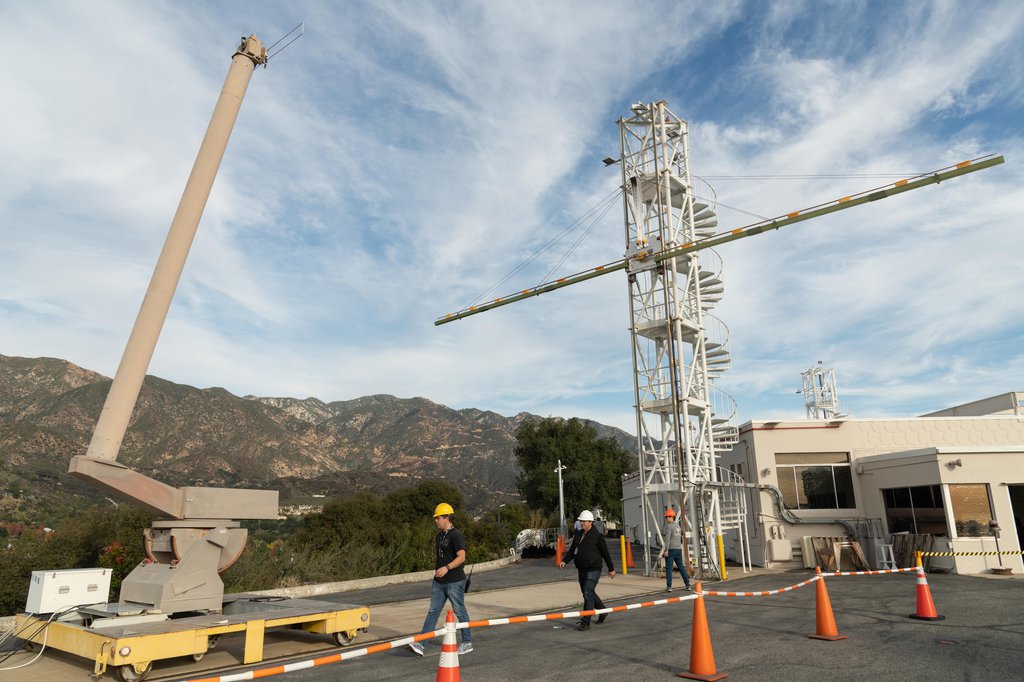 Engineers at NASA's Jet Propulsion Laboratory in Southern California test an engineering model of a high-frequency (HF) radar antenna that makes up part of NASA's Europa Clipper radar instrument on Dec. 17, 2019. The antenna is a 59-foot-long (18-meter-long) narrow copper tube held straight by several cables and a cross bar on the tower at right. In space, the copper tube will stick out straight on its own, but in Earth's gravity, the antenna requires supports to keep it straight for testing. The mobile tower at left holds a model of the VHF (very high-frequency) antenna so that engineers could measure the amount of energy coupled from one antenna to the other.

Europa Clipper's radar instrument is called Radar for Europa Assessment and Sounding: Ocean to Near-surface, or REASON. As the spacecraft orbits Jupiter and surveys its icy moon Europa, REASON will use HF and VHF radio signals to penetrate up to 18 miles (30 kilometers) into the icy shell that covers Europa. The radio waves will bounce off subsurface features and return to the spacecraft to create images of the ice layers' internal structure. REASON will help scientists look for the moon's suspected ocean, measure ice thickness, and better understand the icy shell's interior. The instrument will also study the elevation, properties, and roughness of Europa's surface, and will prowl Europa's upper atmosphere for signs of plume activity.

The antennae were built for NASA by Heliospace Corporation in Berkeley, California, and the University of Texas at Austin is the lead institution for REASON. The testing was conducted at JPL's Mesa Antenna Measurement Facility, which sits on a high plateau.

With an internal global ocean twice the size of Earth's oceans combined, Europa may have the potential to harbor life. The Europa Clipper orbiter will swoop around Jupiter on an elliptical path, dipping close to the moon on each flyby to collect data. Understanding Europa's habitability will help scientists better understand how life developed on Earth and the potential for finding life beyond our planet. Europa Clipper is aiming for a launch readiness date of 2024.