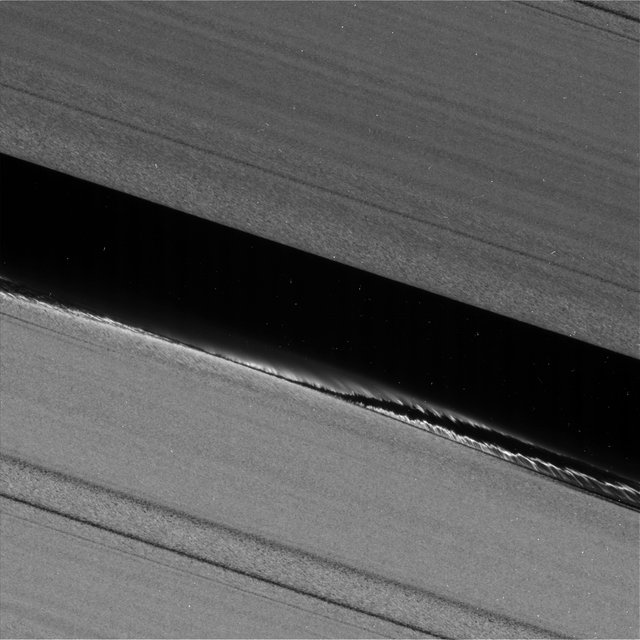 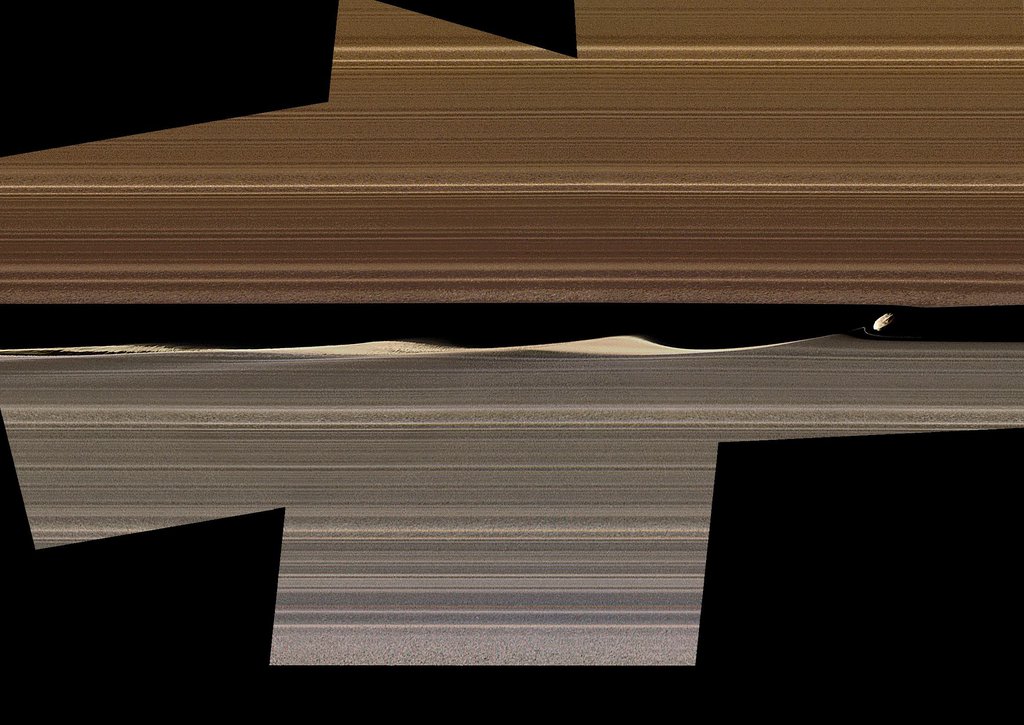 This enhanced-color image mosaic shows Daphnis, one of the moons embedded in Saturn's rings, in the Keeler gap on the sunlit side of the rings. Daphnis is seen kicking up three waves in the gap's outer edge. Three wave crests of diminishing sizes trail the moon. In each successive crest, the shape of the wave changes as the ring particles within the crest interact and collide with each other. A thin strand of ring material to the lower left of Daphnis is newly visible in this image, and there are intricate features that also hadn't been previously observed in the third wave crest downstream (see Figure 1).

Cassini was at a very shallow angle above the rings (only about 15 degrees) when this image was taken. The resulting foreshortening makes it difficult to tell the difference in this image between features representing vertical structure and those representing radial, or outward from Saturn, structure within the ring plane. Nonetheless, Cassini imaging scientists have determined that the waves in the gap are largely vertical; compare this to the shadows that they were seen to cast during equinox (see PIA11547, PIA11653, PIA11655 and PIA11656). The thin strand of material is also probably vertical. Daphnis itself is actually five times smaller than the width of the gap, but it looks bigger here because of the foreshortening.

The color in this image comes from using Imaging Science Subsystem images obtained by applying different filters to "paint" color onto the black-and-white version of this view previously released as PIA17212. The color of the ring region outward of the Keeler Gap (the "trans-Keeler region," in the lower portion of this image) is noticeably different from the color inward from the gap (upper portion of this image). In visible light, this color difference sharply coincides with the gap, while near-infrared Visible and Infrared Mapping Spectrometer (VIMS) images show some bleeding of the trans-Keeler region into the region inward from the gap. The reasons for the sharp change in color are mysterious, but they probably have more to do with a change in particle sizes and other properties than with a change in composition.

The images in this mosaic were taken in visible light, using the Cassini spacecraft narrow-angle camera at a distance of approximately 17,000 miles (28,000 kilometers) from Daphnis and at a Sun-Daphnis-spacecraft angle, or phase angle, of 71 degrees (for the color images, 58 degrees). Image scale is 550 feet (170 meters) per pixel.

The image was produced by Tilmann Denk at Freie Universität in Berlin.

Figure 1 shows a closeup of the third wave crest (toward the far left in the color image) focusing on detail scientists hadn't seen before, with multiple strands of ring material visible. The image shows how the ring material behaves after losing the structure Daphnis triggered and goes back to interacting with itself.

The image shown in Figure 1 was taken in visible light, using the Cassini spacecraft narrow-angle camera at a distance of approximately 15,000 miles (23,000 kilometers) from Daphnis and at a Sun-Daphnis-spacecraft angle, or phase angle, of 94 degrees. Image scale is 520 feet (160 meters) per pixel. Unlike the main image, the image in Figure 1 was taken on the unlit side of the rings.