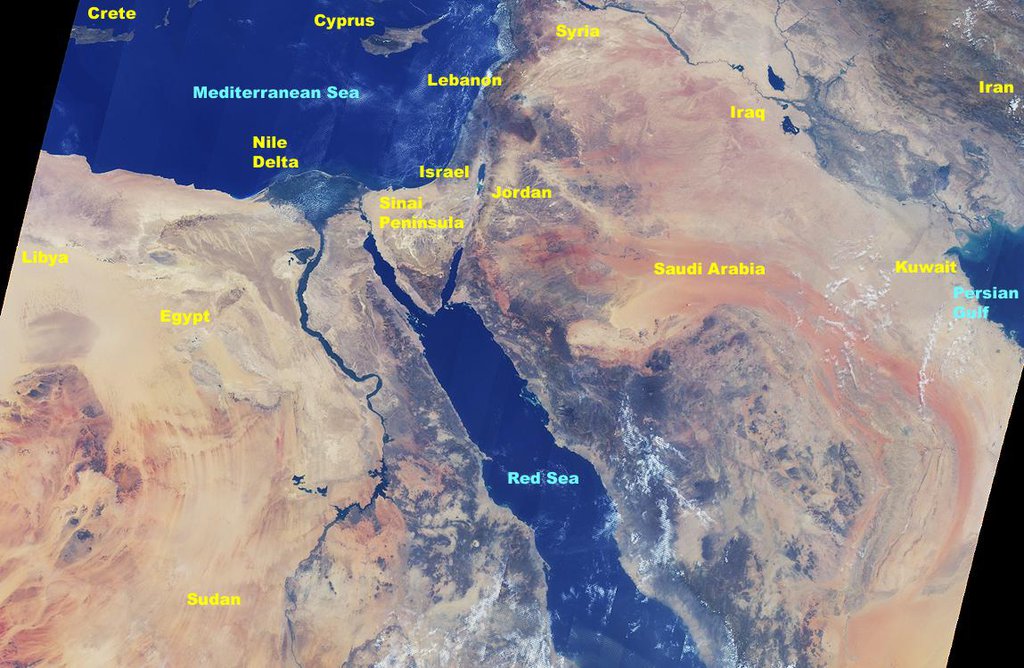 This image, generated using 16 orbits of MISR data collected between August 16 and August 30, 2000, takes us to the cradle of many civilizations. The data are from the 60-degree aftward-viewing camera. Because the individual orbit swaths are only 400 kilometers wide, they were "mosaiced" together to form this composite picture, which covers about 2700 kilometers from west to east and 1750 kilometers from north to south. A few discontinuities are present in the mosaic, particularly near clouds, due to changes in the scene which occurred between dates when the individual orbit data were acquired.

At the northern tip of the Red Sea, the Gulf of Suez and the Gulf of Aqaba frame the sandy deserts and spectacular mountains of the Sinai Peninsula. The highest peaks are Gebel Katherina (Mountain of St. Catherine, 2637 meters) and Gebel Musa (Mountain of Moses, also known as Mount Sinai, 2285 meters). To the northeast, Israel and Jordan flank the Dead Sea, one of the saltiest inland water bodies in the world. At its northern edge is Qumran, where the ancient Scrolls were discovered; the city of Jerusalem lies about 30 kilometers to the west.

Several large rivers are prominent. Flowing southeastward through Iraq are the Tigris and Euphrates. The dark area between the two rivers, northwest of the Persian Gulf, is a very fertile region where fishing and farming are prevalent. Wending its way through eastern Egypt is the Nile. In the south is Lake Nasser and the Aswan Dam; continuing northward the Nile passes the Temple of Luxor as it sharply loops to the east. It then turns west and northward, eventually passing the capital city of Cairo, and finally spreading into a prominent delta as it empties into the Mediterranean Sea. The bright dot just west of the apex of the delta marks the location of the great Pyramids and Sphinx complexes on the Giza Plateau. On the coast, west of the delta, is the ancient city of Alexandria, Egypt's main seaport.

"MISR," as it turns out, is the transliteration of the Arabic name for Egypt.