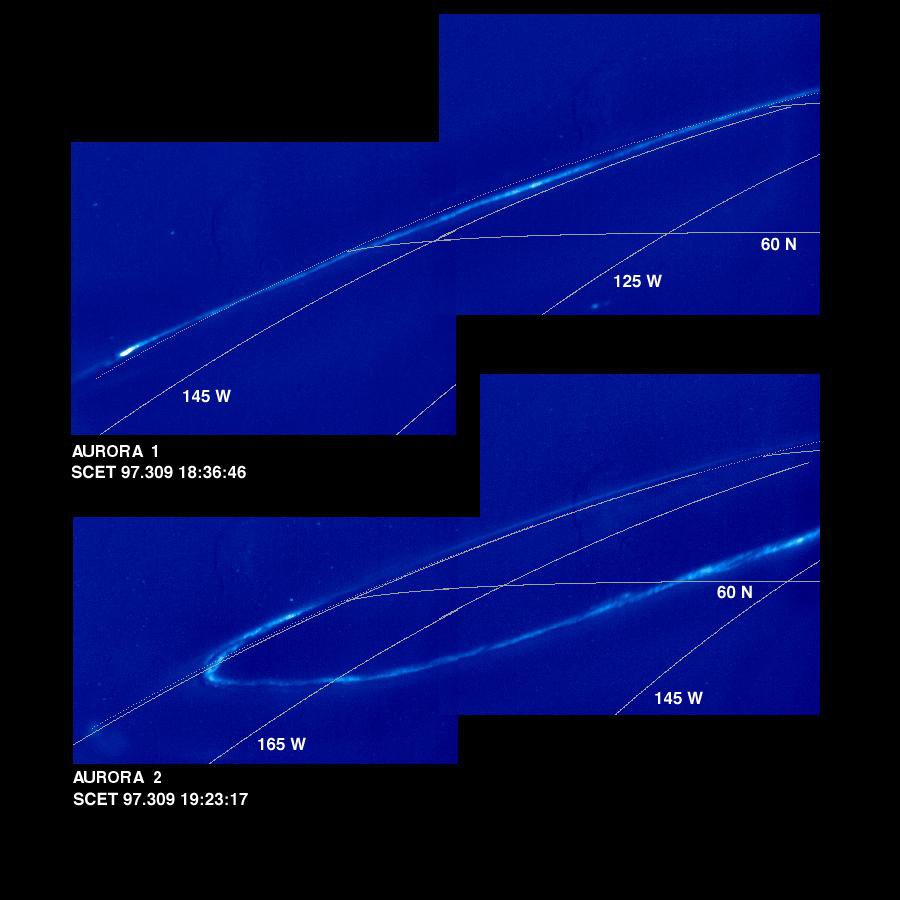 These mosaics of Jupiter's night side show the Jovian aurora at approximately 45 minute intervals as the auroral ring rotated with the planet below the spacecraft. The images were obtained by the Solid State Imaging (SSI) system on NASA's Galileo spacecraft. during its eleventh orbit of Jupiter.

The auroral ring is offset from Jupiter's pole of rotation and reaches the lowest latitude near 165 degrees west longitude. The aurora is hundreds of kilometers wide, and when it crosses the edge of Jupiter, it is about 250 kilometers above the planet.

The mosaics, numbered from earliest to latest in the time series, are:

As on Earth, the auroral emission is caused by electrically charged particles striking atoms in the upper atmosphere from above. The particles travel along Jupiter's magnetic field lines, but their origin is not fully understood. The field lines where the aurora is most intense cross the Jovian equator at large distances (many Jovian radii) from the planet. The faint background throughout the image is scattered light in the camera. This stray light comes from the sunlit portion of Jupiter, which is out of the image. In multispectral observations the aurora appears red, consistent with how atomic hydrogen in Jupiter's atmosphere would glow. Galileo's unique perspective allows it to view the night side of the planet at short range, revealing details that cannot be seen from Earth. These detailed features are time dependent, and can be followed in this sequence of Galileo images.

In the first mosaic, the auroral ring is directly over Jupiter's limb and is seen "edge on." In the fifth mosaic, the auroral emission is coming from several distinct bands. This mosaic also shows the footprint of the Io flux tube. Volcanic eruptions on Jupiter's moon, Io, spew forth particles that become ionized and are pulled into Jupiter's magnetic field to form an invisible tube, the Io flux tube, between Jupiter and Io. The bright circular feature towards the lower right may mark the location where these energetic particles impact Jupiter. Stars which are visible in some of the images enable precise determination of where the camera is pointed. This has allowed the first three dimensional establishment of the position of the aurora. Surprisingly, the measured height is about half the altitude (above the one bar pressure level) predicted by magnetospheric models.

The Universal Time, in Spacecraft Event Time (SCET), that the images were taken is listed beneath each mosaic. The first four frames were taken on November 5, 1997 (SCET 97.309) before the Galileo spacecraft reached perijove, the closest point to Jupiter. The latter four were taken three days later on November 8, 1997 (SCET 97.312), after perijove. Each image was taken at visible wavelengths and is displayed in shades of blue. North is at the top of the picture. A grid of planetocentric latitude and west longitude is overlain on the images. The resolution in the plane of the pictures is 15 kilometers per picture element. The images were taken at a range of 1.3 million kilometers.