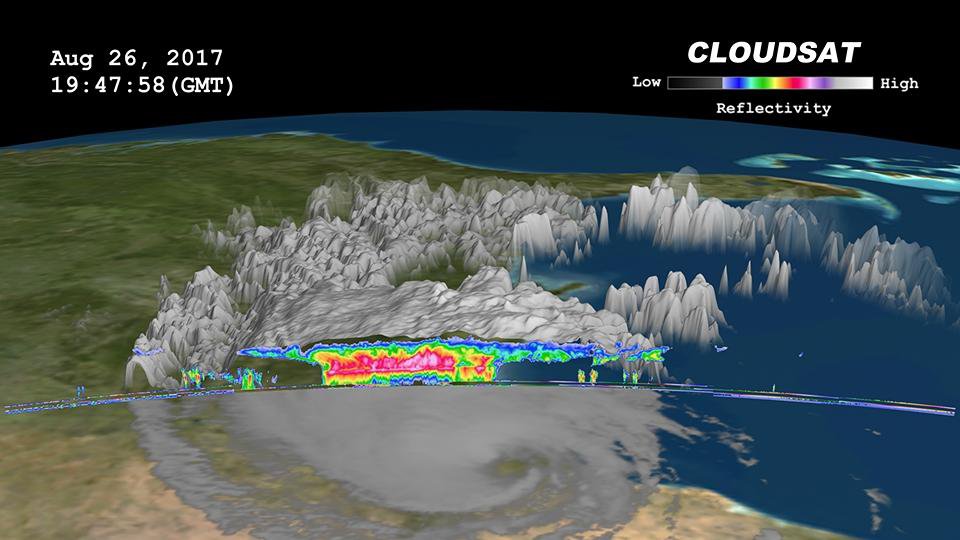 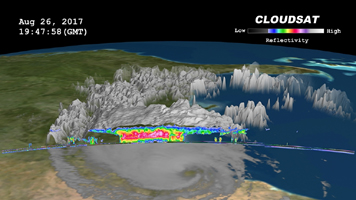 NASA's CloudSat satellite flew over then-Tropical Storm Harvey on Aug. 26, 2017, at 2:45 p.m. CDT (19:45 UTC) as the storm was nearly stationary over south Texas. At that time, Harvey contained estimated maximum sustained winds of 69 miles per hour (60 knots). CloudSat flew over Harvey northeast of the storm center through an area of moderate to heavy rainfall in the outer rainbands. As seen in the image and animation, large amounts of liquid and ice water (denoted by the red and pink colors) are visible beneath the cloud tops. The lack of a radar signal (attenuation) beneath the melting layer (located around 3 miles, or 5 kilometers, above ground) can be seen in the heavier areas of precipitation, since CloudSat's cloud profiling radar (CPR) signal dampens when precipitation particles are larger than 0.12 inches (3 millimeters) in size. Smaller cumulus and cumulonimbus clouds are seen north of the area of moderate to heavy precipitation. The cirrus canopy (anvil clouds) extends outward from the storm system (shown in blue and green colors).