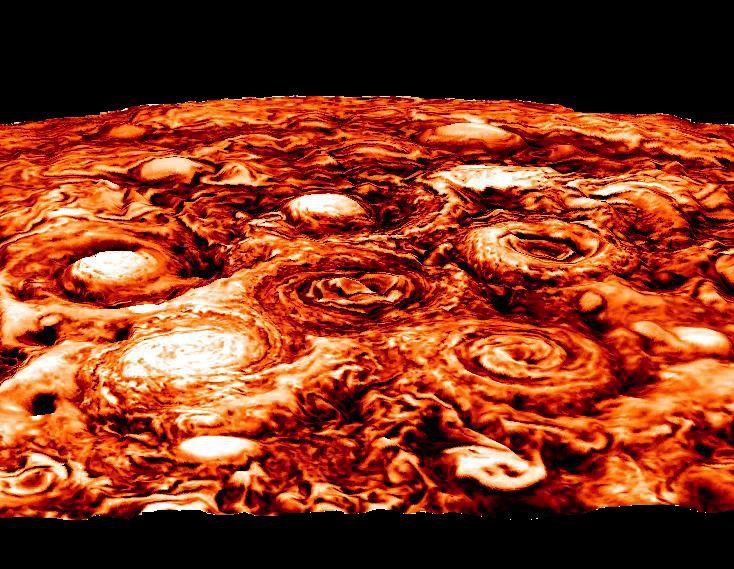 This computer-generated image shows the structure of the cyclonic pattern observed over Jupiter's south pole. Like in the North, Jupiter's south pole also contains a central cyclone, but it is surrounded by five cyclones with diameters ranging from 3,500 to 4,300 miles (5,600 to 7,000 kilometers) in diameter. Almost all the polar cyclones (at both poles), are so densely packed that their spiral arms come in contact with adjacent cyclones. However, as tightly spaced as the cyclones are, they have remained distinct, with individual morphologies over the seven months of observations detailed in the paper.

The data used in generating this image was collected by the Jovian Infrared Auroral Mapper (JIRAM) instrument aboard the Juno spacecraft during the fourth Juno pass over Jupiter on Feb. 2, 2017.

JIRAM is able to collect images in the infrared wavelengths around 5 micrometers (µm) by measuring the intensity of the heat coming out of the planet. The heat from the planet is radiated to space and it is called radiance. This image is an enhancement of the original JIRAM image. In order to give the picture a 3-D shape, the enhancement starts from the idea that the radiance has its highest value where there are no clouds and JIRAM can see deeper into the atmosphere. Consequently, all the other areas of the image are originally shaded more or less by clouds of different thickness. Then, to create these pictures, the originals have been inverted to give the thicker clouds the whitish color and the third dimension that we see with normal clouds here in the Earth's atmosphere.