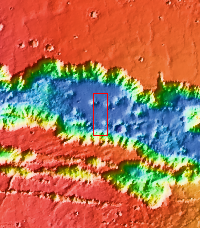 Coprates Chasma is one of the numerous canyons that make up Valles Marineris. The chasma stretches for 960 km (600 miles) from Melas Chasma to the west and Capri Chasma to the east. Landslide deposits, layered materials and sand dunes cover a large portion of the chasma floor. This image is located in eastern Coprates Chasma. The image shows a relatively smooth floor, with a group of sand dune forms located against the wall of the chasma (bottom of image).