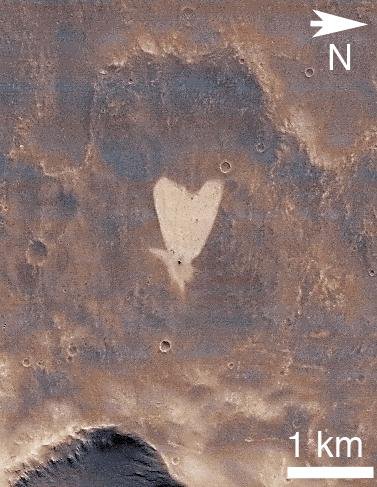 This picture of a heart-shaped feature in Arabia Terra on Mars was taken on May 23, 2010, by the Context Camera (CTX) on NASA's Mars Reconnaissance Orbiter. A small impact crater near the tip of the heart is responsible for the formation of the bright, heart-shaped feature. When the impact occurred, darker material on the surface was blown away, and brighter material beneath it was revealed. Some of this brighter material appears to have flowed further downslope to form the heart shape, as the small impact occurred on the ejecta blanket of a much larger impact crater.

The heart-shaped feature is about 1 kilometer (0.6 mile) long and is centered at 21.9 degrees north latitude, 12.7 degrees west longitude.

These pictures are subframes of the full CTX image B21_017910_2002_XI_20N012W, taken just at the start of northern summer on Mars. North is to the right, and illumination is from the upper right. The CTX image has been colorized using a look-up table based on Mars Orbiter Camera red and blue wide angle images that maps albedo to color.

The Context Camera was provided by and is operated by Malin Space Science Systems, San Diego, Calif. NASA's Jet Propulsion Laboratory, a division of the California Institute of Technology, Pasadena, Calif., manages the Mars Reconnaissance Orbiter for the NASA Science Mission Directorate, Washington. Lockheed Martin Space Systems, Denver, built the spacecraft and operates it in partnership with JPL.