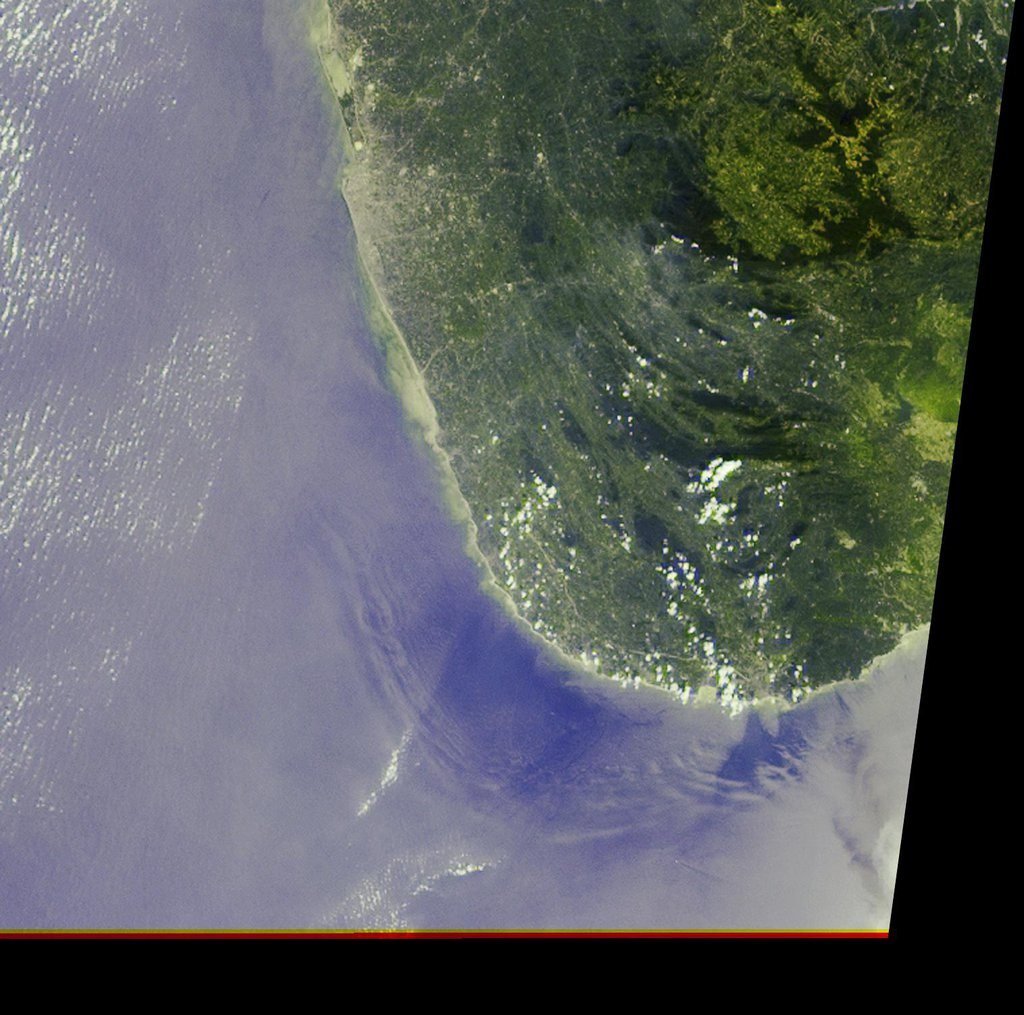 The initial tsunami waves resulting from the undersea earthquake that occurred at 00:58:53 UTC (Coordinated Universal Time) on 26 December 2004 off the island of Sumatra, Indonesia, took a little over 2 hours to reach the teardrop-shaped island of Sri Lanka. Additional waves continued to arrive for many hours afterward. At approximately 05:15 UTC, as NASA's Terra satellite passed overhead, the Multi-angle Imaging SpectroRadiometer (MISR) captured this image of deep ocean tsunami waves about 30-40 kilometers from Sri Lanka's southwestern coast. The waves are made visible due to the effects of changes in sea-surface slope on the reflected sunglint pattern, shown here in MISR's 46° forward-pointing camera. Sunglint occurs when sunlight reflects off a water surface in much the same way light reflects off a mirror, and the position of the Sun, angle of observation, and orientation of the sea surface determines how bright each part of the ocean appears in the image. These large wave features were invisible to MISR's nadir (vertical-viewing) camera. The image covers an area of 208 kilometers x 207 kilometers.

Since the greatest impact of the tsunami was generally in an east-west direction, the havoc caused by the tsunami along the southwestern shores of Sri Lanka was not as severe as along the eastern coast, though there was still substantial damage in this region--as evidenced by the brownish debris in the water--because tsunami waves can diffract around land masses. The ripple-like wave pattern evident in this MISR image roughly correlates with the undersea boundary of the continental shelf. This surface manifestation is likely to be caused by interaction of deep waves with the ocean floor, rather than by the more usually-observed surface waves driven by winds. It is possible that this semi-concentric pattern represents wave reflection from the continental land mass; however, a combination of wave modeling and detailed bathymetric data is required to fully understand the dynamics. Examination of other MISR images of this area, taken under similar illumination conditions, has not uncovered any surface patterns resembling those seen here.

This image is an example of how MISR's multiangular capability provides unique information for understanding how tsunamis propagate. Another application of MISR data enabled measuring the motion of breaking tsunami waves along the eastern shores of Andhra Pradesh, India.

The Multi-angle Imaging SpectroRadiometer observes the daylit Earth continuously and every 9 days views the entire globe between 82° north and 82° south latitude. These data products were generated from a portion of the imagery acquired during Terra orbit 26720 and utilize data from within blocks 85 to 86 within World Reference System-2 path 142.