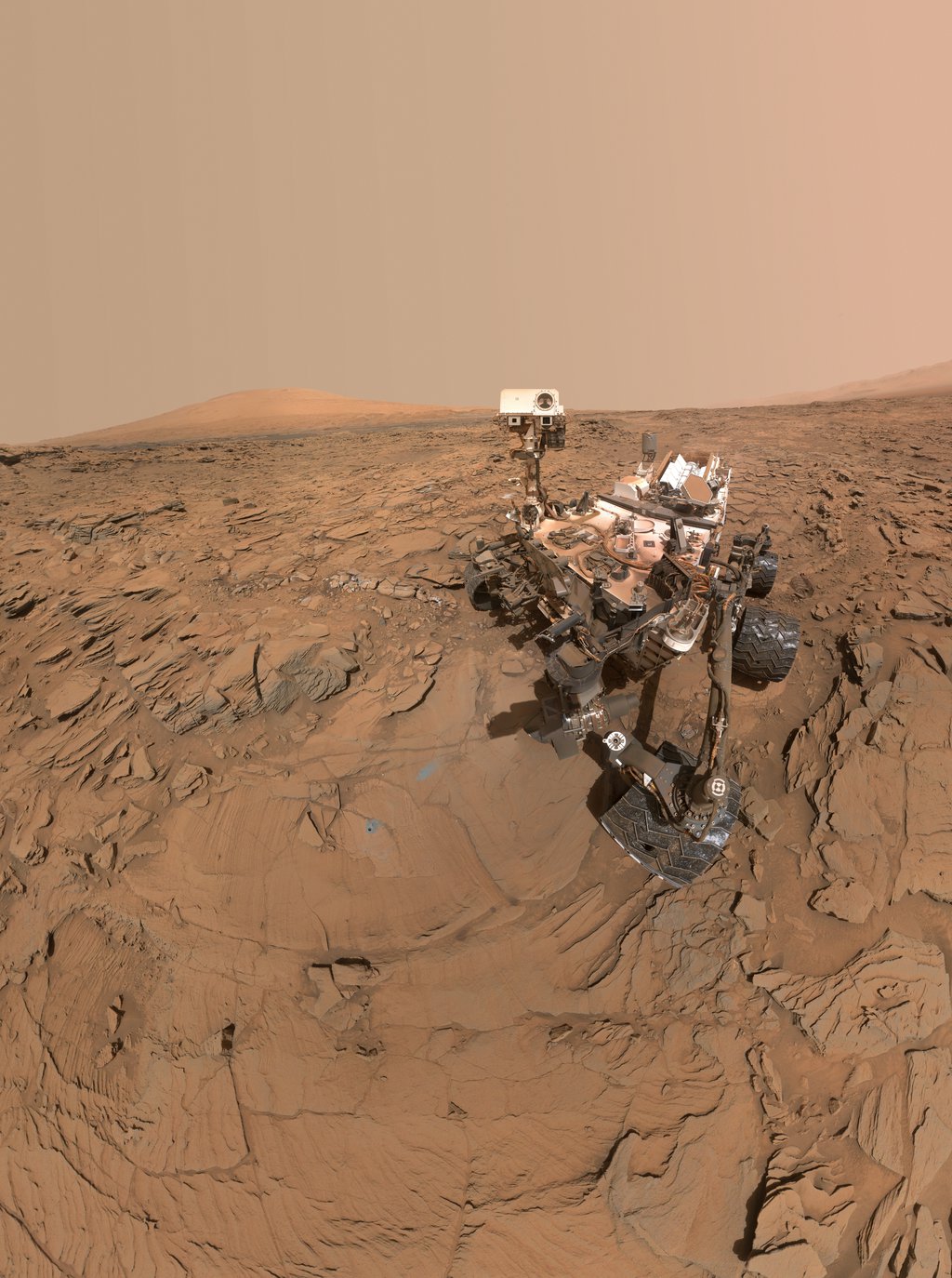 This self-portrait of NASA's Curiosity Mars rover shows the vehicle at a drilled sample site called "Okoruso," on the "Naukluft Plateau" of lower Mount Sharp. The scene combines multiple images taken with the rover's Mars Hand Lens Imager (MAHLI) on May 11, 2016, during the 1,338th Martian day, or sol, of the rover's work on Mars.

In front of the rover is the hole, surrounded by grayish drill cuttings, created by using Curiosity's drill to collect sample rock powder at Okoruo, plus a patch of powder dumped onto the ground after delivery of a portion to the rover's internal Chemistry and Mineralogy (CheMin) laboratory instrument.

The rover team compared the rock powder from drilling at Okoruso to material from the nearby "Lubango" drilling site, which is visible behind the rover, just to the left of the mast. The Lubango site was selected within a pale zone, or "halo," beside a fracture in the area's sandstone bedrock. Okoruso is in less-altered bedrock farther from any fractures. Note that the Okoruso drill cuttings appear darker than the Lubango drill cuttings. The Lubango sample was found to be enriched in silica and sulfates, relative to Okoruso.

To the left of the rover, in this scene, several broken rocks reveal grayish interiors. Here, Curiosity was driven over the rocks in a fracture-associated halo, so that freshly exposed surfaces could be examined with MAHLI, Mast Camera (Mastcam) and Chemistry and Camera (ChemCam) instruments.

An upper portion of Mount Sharp is prominent on the horizon. A map at PIA20748 shows locations of Okoruso and Lubango relative to other drilling sites along Curiosity's route.

The MAHLI camera is mounted at the end of the rover's robotic arm. The rover self-portrait view from stitching together multiple images does not include the rover's arm. Wrist motions and turret rotations on the arm allowed MAHLI to acquire the mosaic's component images. The arm was positioned out of the shot in the images, or portions of images, that were used in this mosaic. This process was used previously in acquiring and assembling Curiosity self-portraits taken at sample-collection sites, including "Bagnold Dune Field" (PIA20317), "Rocknest" (PIA16468), "Windjana" (PIA18390) and "Buckskin" (PIA19807).

Another version (PIA20603) of this self-portrait at Okoruso poses the top of the mast with the cameras on the mast facing away from MAHLI. The animated version blinks back and forth between the two views.

Photojournal Note: Also available is the full resolution TIFF file PIA20602_full.tif. This file may be too large to view from a browser; it can be downloaded onto your desktop by right-clicking on the previous link and viewed with image viewing software.