Curiosity and Rover Tracks at 'the Kimberley,' April 2014 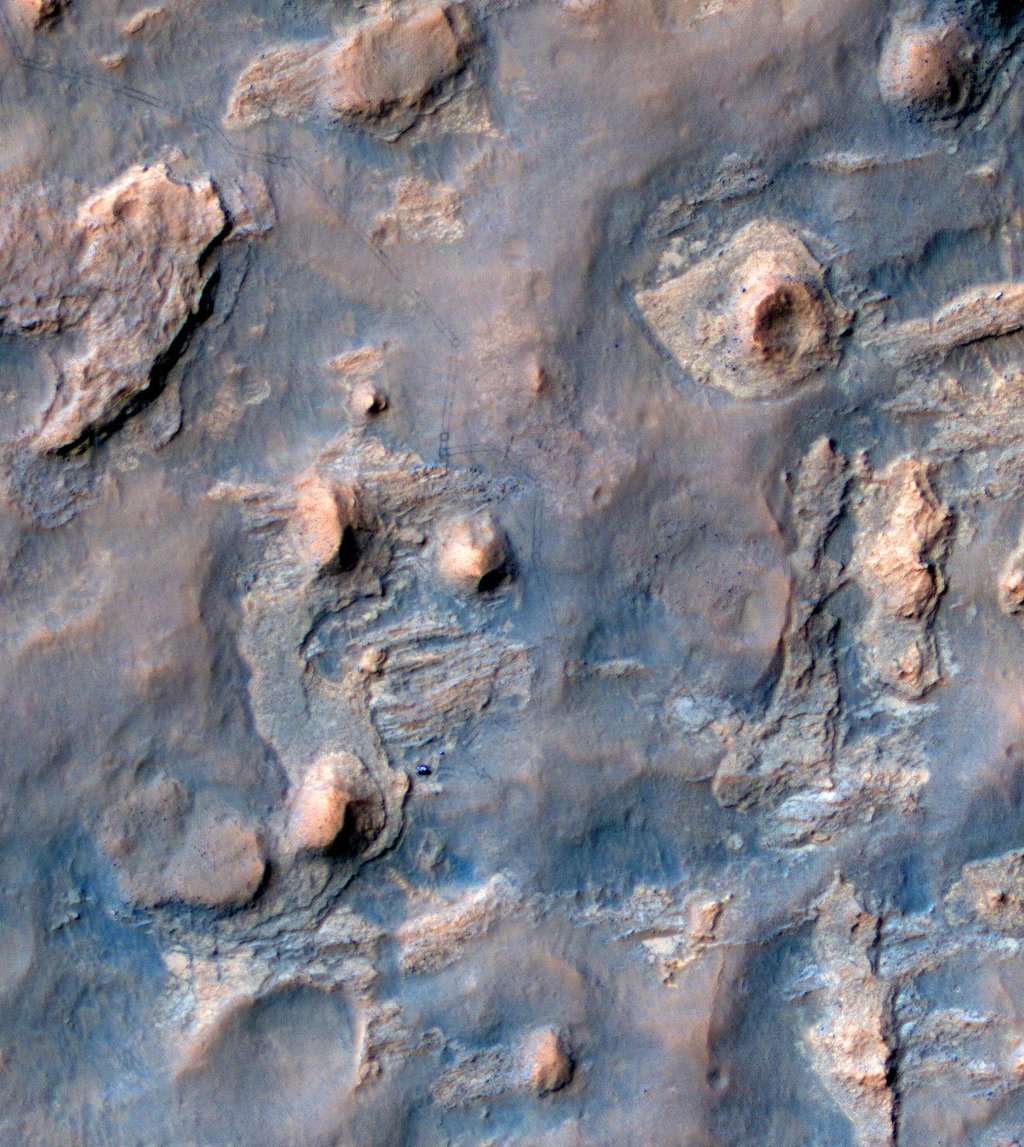 NASA's Curiosity Mars rover and tracks from its driving are visible in this view from orbit, acquired on April 11, 2014, by the High Resolution Imaging Science Experiment (HiRISE) camera on NASA's Mars Reconnaissance Orbiter.

The rover is near the largest butte in the lower left quadrant of the image, at about a two o'clock position relative to the butte. It appears bright blue in the exaggerated color of this image.

The multi-layered location filling much of the left half of this image is called "the Kimberley." Curiosity's science team chose it, based on other HiRISE images, as a potential gold mine for the rover mission. Black gold, that is, as organic material that, if found at the Kimberley could be a biomarker (sign of past life) -- the holy grail of Mars exploration.

In December 2013, at the fall meeting of the American Geophysical Union in San Francisco, Curiosity Project Scientist John Grotzinger talked about what the mission had learned that year in a location called "Yellowknife Bay," and why the team was planning to stop Curiosity and drill again at the Kimberley. Mudstones that Curiosity drilled and analyzed at Yellowknife Bay had been exposed at the Martian surface for less than 100 million years, which is relatively recent, geologically speaking. Scientists deduced that this was due to erosion of overlying layers by the wind, and that even younger exposure ages should be possible closer to an eroding scarp. This matters because Mars doesn't have a magnetosphere and thick atmosphere like Earth's, which protect us from energetic particles from space that break down organic material. Thus, rocks that have been near the surface of Mars longer (on geological time scales) are less likely to contain complex organic material. Complex organic material might be the remains of past life, or at least inform us about past habitability. Habitability is the potential to support life, whether or not life ever actually existed there.

By late 2013, Curiosity had left Yellowknife Bay and wasn't going to turn around, but similar scarps lay ahead, on the way to the mission's long-term destinations on lower slopes of Mount Sharp (also known as Aeolis Mons). The team had already chosen Curiosity's next major target: the Kimberley. This location, where Curiosity arrived in early April 2014, has what appear to be geologically young scarps. This HiRISE image shows the rover close to one of the scarps.

Curiosity entered the area included in this image on March 12, along the tracks visible near the upper left corner. The distance between parallel wheel tracks is about 9 feet (2.7 meters). The area included in the image is about 1,200 feet (about 365 meters) wide. This view is an enhanced-color product from HiRISE observation ESP_036128_1755, available at the HiRISE website at http://uahirise.org/releases/msl-kimberley.php. The exaggerated color, to make differences in Mars surface materials more apparent, makes Curiosity appear bluer than the rover really looks. A stereo view combining information from this observation with topography derived from earlier HiRISE observations, for a three-dimensional appearance, is at PIA18082.

A rover's-eye view taken by Curiosity from the location where the rover is seen in this image is online at PIA18083.