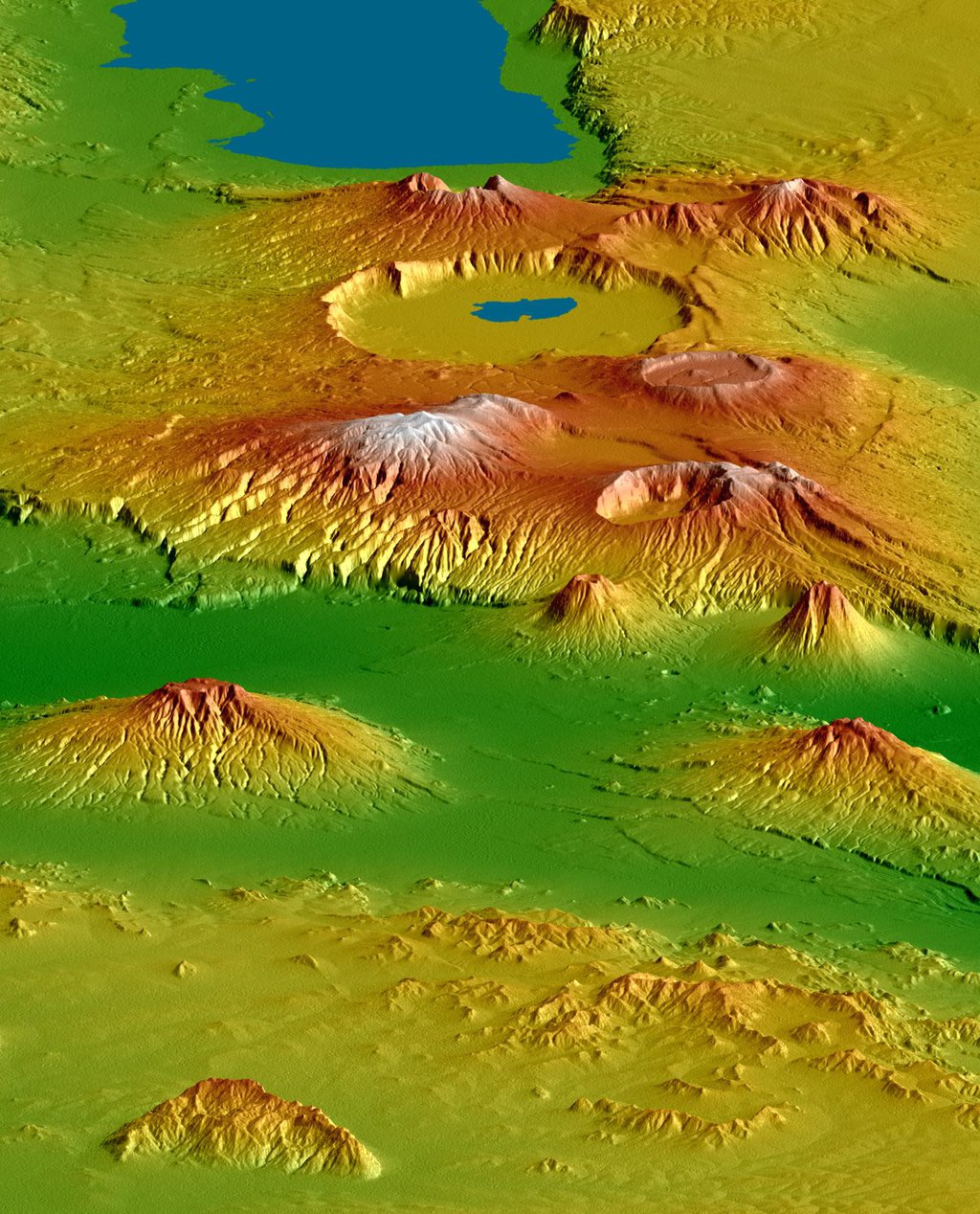 The Shuttle Radar Topography Mission (SRTM), flown aboard Space Shuttle Endeavour in February 2000, acquired elevation measurements for nearly all of Earth's landmass between 60°N and 56°S latitudes. For many areas of the world SRTM data provide the first detailed three-dimensional observation of landforms at regional scales. SRTM data were used to generate this view of the Crater Highlands along the East African Rift in Tanzania. Landforms are depicted with colored height and shaded relief, using a vertical exaggeration of 2X and a southwestwardly look direction.

Lake Eyasi is depicted in blue at the top of the image, and a smaller lake occurs in Ngorongoro Crater. Near the image center, elevations peak at 3648 meters (11,968 feet) at Mount Loolmalasin, which is south of Ela Naibori Crater. Kitumbeine (left) and Gelai (right) are the two broad mountains rising from the rift lowlands. Mount Longido is seen in the lower left, and the Meto Hills are in the right foreground.

Tectonics, volcanism, landslides, erosion and deposition -- and their interactions -- are all very evident in this view. The East African Rift is a zone of spreading between the African (on the west) and Somali (on the east) crustal plates. Two branches of the rift intersect here in Tanzania, resulting in distinctive and prominent landforms. One branch trends nearly parallel the view and includes Lake Eyasi and the very wide Ngorongoro Crater. The other branch is well defined by the lowlands that trend left-right across the image (below center, in green). Volcanoes are often associated with spreading zones where magma, rising to fill the gaps, reaches the surface and builds cones. Craters form if a volcano explodes or collapses. Later spreading can fracture the volcanoes, which is especially evident on Kitumbeine and Gelai Mountains (left and right, respectively, lower center).

The Crater Highlands rise far above the adjacent savannas, capture moisture from passing air masses, and host rain forests. Over time, streams erode downward toward the level of the adjacent rift, deeply dissecting the volcanic slopes. This is especially evident on the eastern flanks of Mount Loolmalasin (left of center).

Landsliding also occurs here. In particular, the small but steep volcanic cone nearest the image center has a landslide scar on its eastern (left) flank, and topographic evidence shows that the associated landslide deposits extend eastward 10 kilometers (6 miles) across the floor of the rift. Such a long run of landslide debris is unusual but is not unique on Earth.

Elevation data used in this image were acquired by the Shuttle Radar Topography Mission (SRTM) aboard the Space Shuttle Endeavour, launched on February 11, 2000. SRTM used the same radar instrument that comprised the Spaceborne Imaging Radar-C/X-Band Synthetic Aperture Radar (SIR-C/X-SAR) that flew twice on the Space Shuttle Endeavour in 1994. SRTM was designed to collect three-dimensional measurements of the Earth's surface. To collect the 3-D data, engineers added a 60-meter-long (200-foot) mast, installed additional C-band and X-band antennas, and improved tracking and navigation devices. The mission is a cooperative project between the National Aeronautics and Space Administration (NASA), the National Geospatial-Intelligence Agency (NGA) of the U.S. Department of Defense (DoD), and the German and Italian space agencies. It is managed by NASA's Jet Propulsion Laboratory, Pasadena, Calif., for NASA's Science Mission Directorate, Washington, DC.