Comparing 'Cumberland' With Other Samples Analyzed by Curiosity 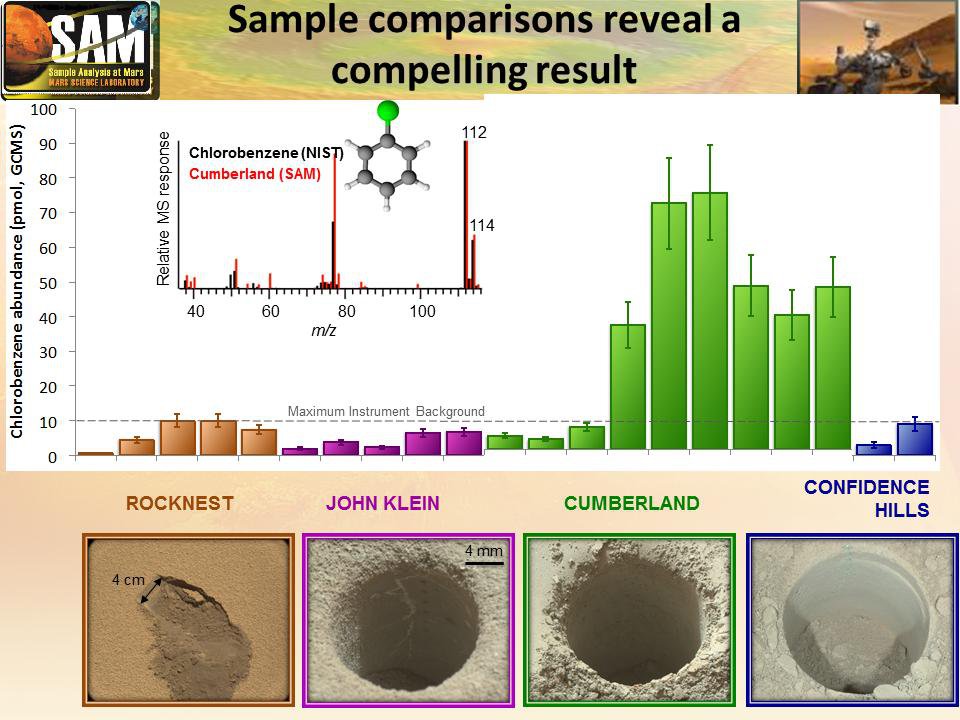 This graphic offers comparisons between the amount of an organic chemical named chlorobenzene detected in the "Cumberland" rock sample and amounts of the same compound in samples from three other Martian surface targets analyzed by NASA's Curiosity Mars rover.

The amounts of chlorobenzene that Curiosity's Sample Analysis at Mars (SAM) laboratory detected in samples from the "Rocknest" Martian soil target and the "John Klein" and "Confidence Hills" rock targets were at or below the background level in the instrument. The amount in Cumberland is much higher than all the others, as indicated in the green bars on a vertical scale of picomoles measured with SAM's gas chromatograph mass spectrometer system (GCMS). The lower portion of the graphic shows images from the scoop divot at Rocknest and drill holes at the rock targets. The inset graph shows how the mass spectrum of the chemical found by SAM in the Cumberland sample closely matches that of a chlorobenzene laboratory standard from the National Institute of Standards and Technology (NIST) database.

The chlorobenzene may have resulted from reaction of Martian organic chemicals with Martian perchlorate during the process of heating the sample in SAM, so the precursor identities of Martian organic molecules in the rock remain to be determined.

Analysis of the Cumberland sample by SAM yielded the first definitive detection of any Martian organic chemicals in material on the surface of Mars. Organic chemicals, which contain carbon and usually hydrogen, are molecular building blocks of life, although they can be made without life's presence. Martian organics could have been produced on Mars or delivered to Mars aboard meteorites.