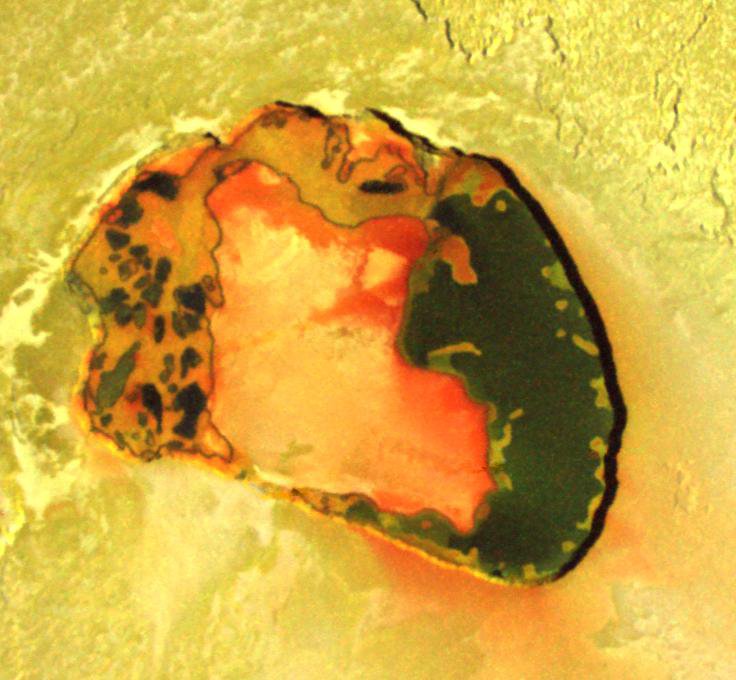 The colorfulness of the image is only slightly enhanced from what the human eye would see on the scene. The red in the image includes a small amount of infrared energy. Tupan Patera, named after a Brazilian thunder god, was seen as an active hot spot in earlier Galileo observations, but those low-resolution views did not show details of volcanic activity. This image taken in October 2001 at a resolution of 135 meters (443 feet) per picture element reveals the complex nature of the crater.

Tupan is now clearly shown to be a volcanic depression, about 75 kilometers (47 miles) across, surrounded by cliffs about 900 meters (3000 feet) tall. In the center is a large area that must be higher than the rest of the crater floor because it has not been covered by the dark lavas. Much of the area is coated with a diffuse red deposit that Galileo scientists believe has condensed from sulfur gas escaping from volcanic vents. The floor of Tupan is covered with a surreal pattern of dark black, green, red, and yellow materials. The black material is recent, still-warm lava. The yellow is presumed to be a mix of sulfurous compounds, and the green appears to form where red sulfur has interacted with the dark lavas. While Galileo scientists have found previous evidence for both molten sulfur and molten rock on Io, this image shows the best evidence to date of chemical reactions taking place between the two.

The intermingled patches of sulfur and lava are difficult to explain. The yellowish sulfur may be melting from within the crater walls over solidified but warm lava. The sulfur may boil away from the areas too hot for liquid sulfur to sit on, leaving patches where the dark lava is still visible.

North is to the top of the image and the Sun illuminates the surface from the upper right.

The Jet Propulsion Laboratory, a division of the California Institute of Technology in Pasadena, manages the Galileo mission for NASA's Office of Space Science, Washington, D.C. Additional information about Galileo and its discoveries is available on the Galileo mission home page at http://solarsystem.nasa.gov/galileo/. Background information and educational context for the images can be found at http://galileo.jpl.nasa.gov/gallery/io.cfm.