Cassiopeia A: Death Becomes Her 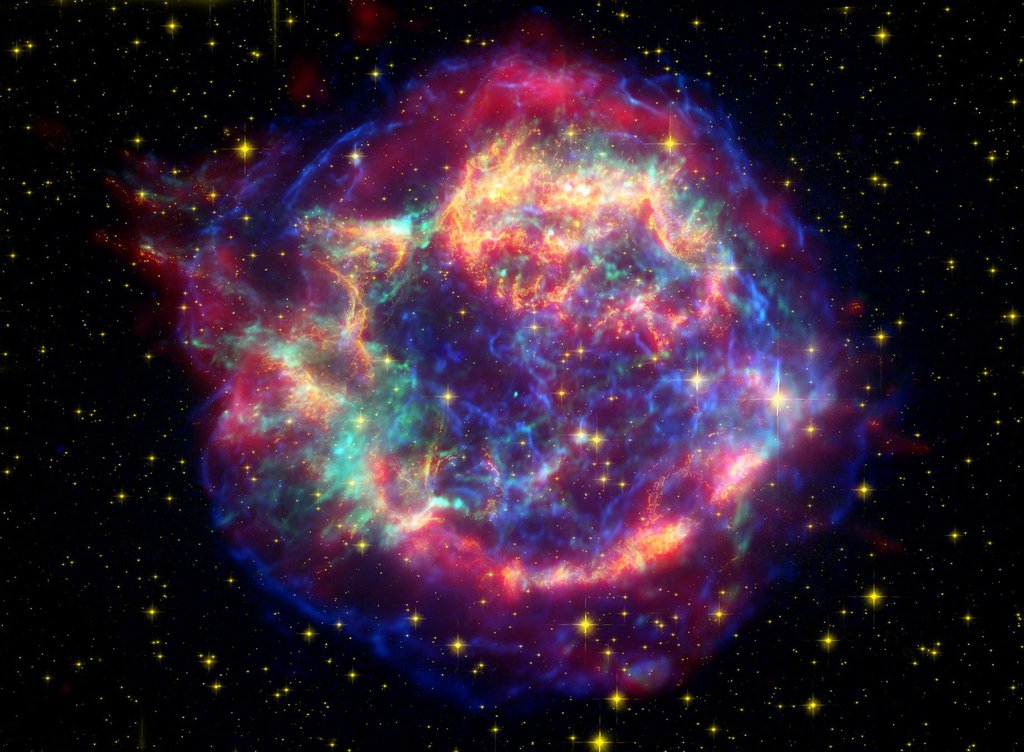 Located 10,000 light-years away in the northern constellation Cassiopeia, Cassiopeia A is the remnant of a once massive star that died in a violent supernova explosion 325 years ago. It consists of a dead star, called a neutron star, and a surrounding shell of material that was blasted off as the star died. The neutron star can be seen in the Chandra data as a sharp turquoise dot in the center of the shimmering shell.

The animation begins with the false-color picture of the supernova remnant Cassiopeia A. It then pans out to show a Spitzer view of Cassiopeia A (yellow ball) and surrounding clouds of dust (reddish orange). Here, the animation flips back and forth between two Spitzer images taken one year apart. A blast of light from Cassiopeia A is seen waltzing through the dusty skies. Called an "infrared echo," this dance began when the remnant's dead star erupted, or "turned in its grave," about 50 years ago.

Infrared echoes are created when a star explodes or erupts, flashing light into surrounding clumps of dust. As the light zips through the dust clumps, it heats them up, causing them to glow successively in infrared, like a chain of Christmas bulbs lighting up one by one. The result is an optical illusion, in which the dust appears to be flying outward at the speed of light. Echoes are distinct from supernova shockwaves, which are made up material that is swept up and hurled outward by exploding stars.

This infrared echo is the largest ever seen, stretching more than 50 light-years away from Cassiopeia A. If viewed from Earth, the entire movie frame would take up the same amount of space as two full moons.

Hints of an older infrared echo from Cassiopeia A's supernova explosion hundreds of years ago can also be seen.