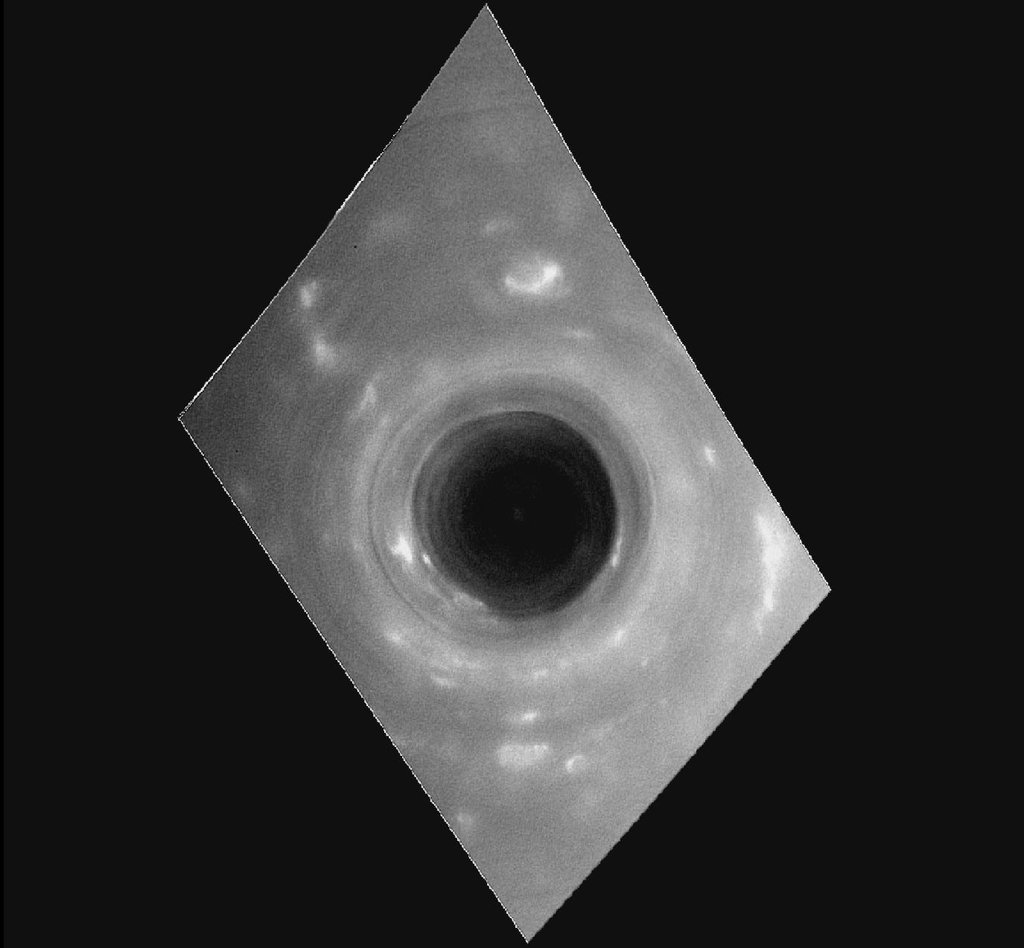 Click on an individual image to view the compressed movie

This movie sequence of images from NASA's Cassini spacecraft shows the view as Cassini swooped over Saturn during the first of its Grand Finale dives between the planet and its rings on April 26, 2017.

The movie comprises one hour of observations as the spacecraft moved southward, beginning with a view of the vortex at Saturn's north pole, then heading past the outer boundary of the hexagon-shaped jet stream and beyond.

Toward the end of the movie, the camera frame rotates because the spacecraft adjusted its orientation, pointing its high-gain antenna in the direction of the spacecraft's motion as a protective measure before crossing Saturn's ring plane.

The speed at which the cloudscape below moves past also increases noticeably during the sequence, as Cassini moves with increasing speed the closer it comes to the planet.

A second, supplemental movie (1 GB .mov file) adds an image of Saturn for reference. The red dot on the Saturn image indicates the location (technically, the center latitude) of each frame in the movie. (The Saturn image was captured by Cassini on May 1, 2016.)

A third, supplemental animation (200 MB .mov file) shows Cassini's position and orientation above Saturn as the images were being taken, along with the camera's field of view projected onto the planet.

As the movie frames were captured, the Cassini spacecraft's altitude above the clouds changed from 45,000 to 4,200 miles (72,400 to 6,700 kilometers); the image scale changed from 5.4 miles (8.7 kilometers) per pixel to 0.5 mile (810 meters) per pixel. The first frame of the movie is centered on the north pole, and the last frame is centered on 18 degree north latitude.

The images in this sequence were captured in visible light using the Cassini wide-angle camera. The original versions of these images, as sent by the spacecraft, have a size of 512 by 512 pixels. The small image size was chosen in order to allow the cameras to take images quickly as Cassini passed over Saturn.

The images, which show Saturn's curved surface, have been projected onto a flat plane here to enable assembly into a continuous movie sequence. Each image was mapped in polar stereographic projection centered on the camera before being assembled into the movie.