Autonomous Selection of a Rover's Laser Target on Mars 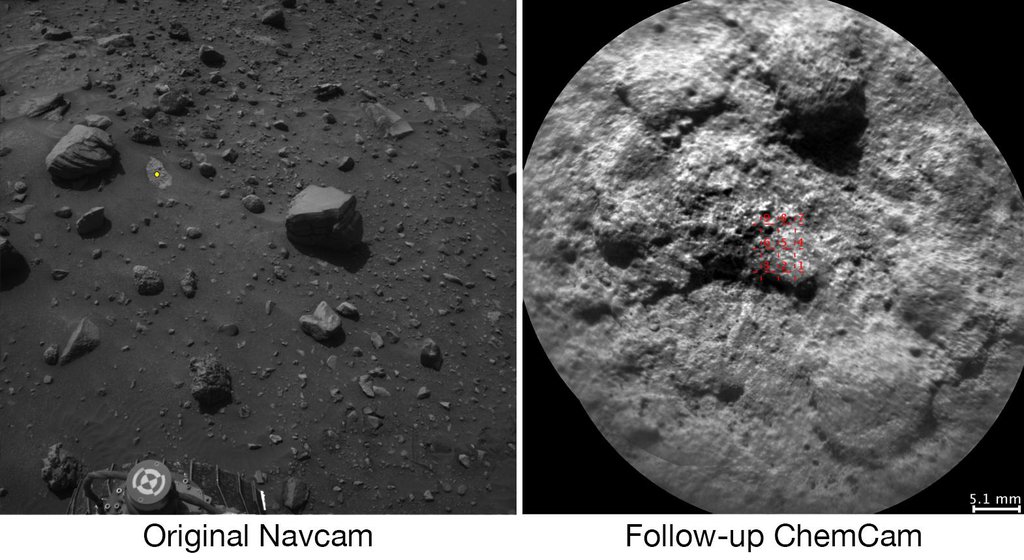 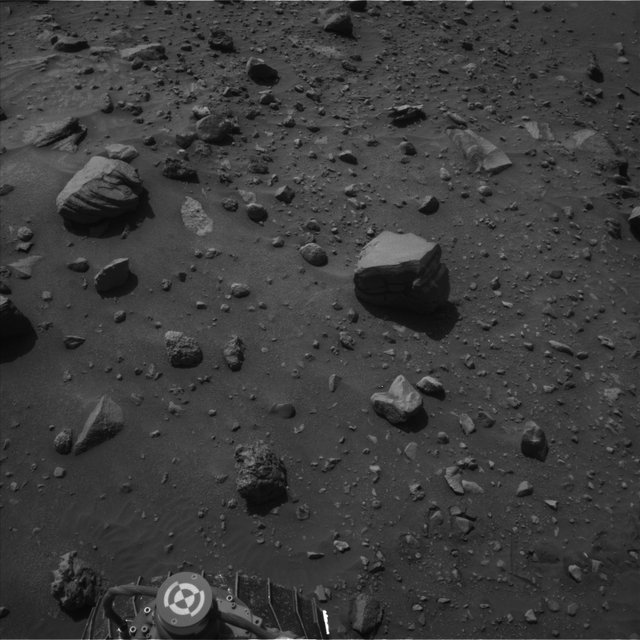 NASA's Curiosity Mars rover autonomously selects some of the targets for the laser and telescopic camera of the rover's Chemistry and Camera (ChemCam) instrument. For example, on-board software analyzed the image on the left, chose the target highlighted with the yellow dot, and pointed ChemCam to acquire laser analysis and the image on the right.

Most ChemCam targets are still selected by scientists discussing rocks or soil seen in images the rover has sent to Earth, but the autonomous targeting provides an added capability. It can offer a head start on acquiring composition information at a location just reached by a drive. The software for target selection and instrument pointing is called AEGIS, for Autonomous Exploration for Gathering Increased Science.

The image on the left was taken by the left eye of Curiosity's stereo Navigation Camera (Navcam) a few minutes after the rover completed a drive of about 43 feet (13 meters) on July 14, 2016, during the 1,400th Martian day, or sol, of the rover's work on Mars. Using AEGIS for target selection and pointing based on the Navcam imagery, Curiosity's ChemCam zapped a grid of nine points on a rock chosen for meeting criteria set by the science team. In this run, parameters were set to find bright-toned outcrop rock rather than darker rocks, which in this area tend to be loose on the surface. Within less than 30 minutes after the Navcam image was taken, ChemCam had used its laser on all nine points and had taken before-and-after images of the target area with its remote micro-imager (RMI) camera. The image at right combines those two RMI exposures. The nine laser targets are marked in red at the center.

On the Navcam image at left, the yellow dot identifies the selected target area, which is about 2.2 inches (5.6 centimeters) in diameter. An unannotated version of this Sol 1400 Navcam image is available as Figure 1.

ChemCam records spectra of glowing plasma generated when the laser hits a target point. These spectra provide information about the chemical elements present in the target. The light-toned patch of bedrock identified by AEGIS on Sol 1400 appears, geochemically, to belong to the "Stimson" sandstone unit of lower Mount Sharp. In mid-2016, Curiosity typically uses AEGIS for selecting a ChemCam target more than once per week.

AEGIS software was developed at NASA's Jet Propulsion Laboratory, Pasadena, California. ChemCam is one of 10 instruments in Curiosity's science payload. The U.S. Department of Energy's Los Alamos National Laboratory, in Los Alamos, New Mexico, developed ChemCam in partnership with scientists and engineers funded by the French national space agency (CNES), the University of Toulouse and the French national research agency (CNRS). More information about ChemCam is available at http://www.msl-chemcam.com/ .