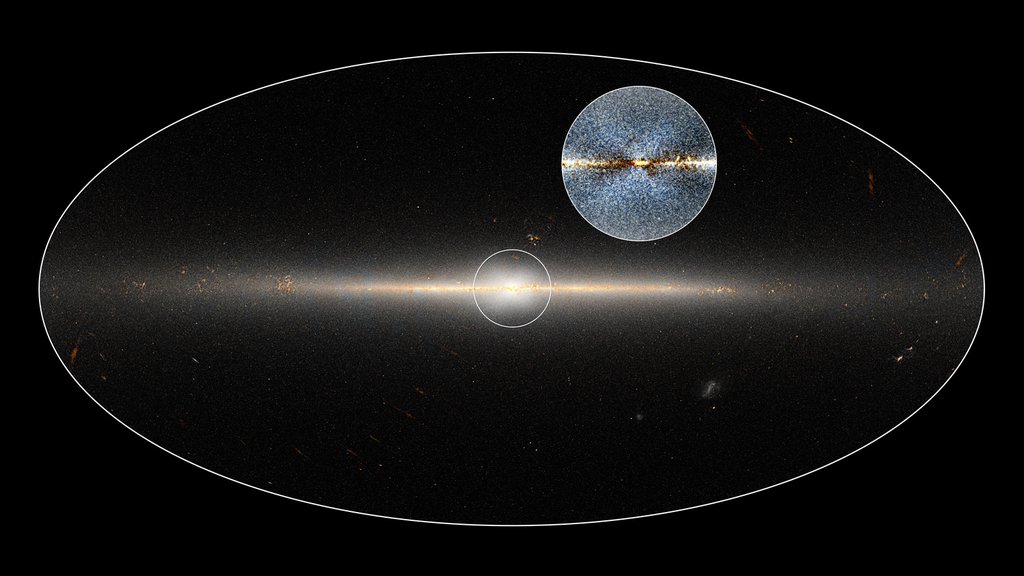 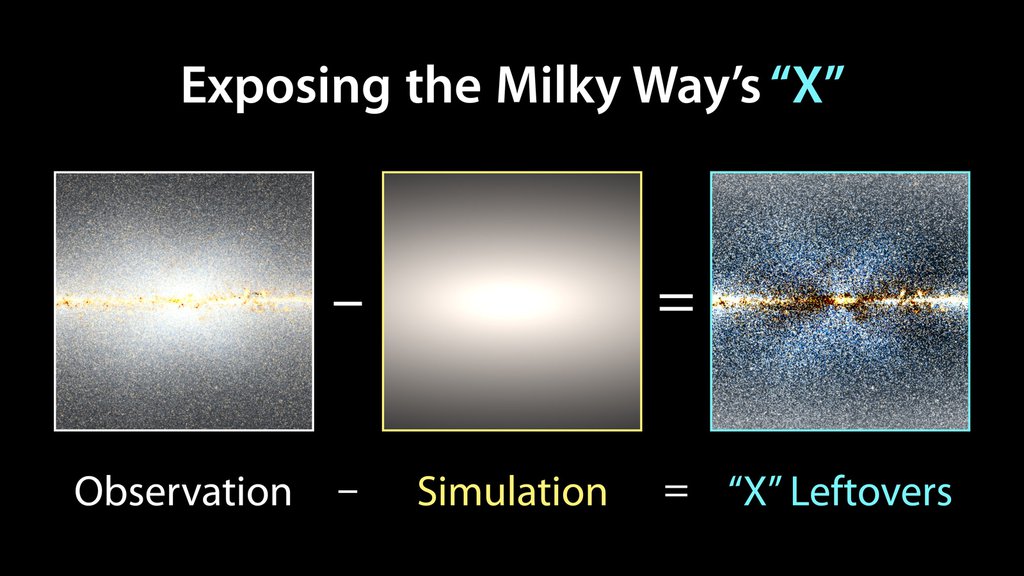 To reveal the X shape in the Milky Way's central bulge, researchers took WISE observations and subtracted a model of how stars would be distributed in a symmetrical bulge.
Credit: NASA/JPL-Caltech/D.Lang

A new understanding of our galaxy's structure began in an unlikely way: on Twitter.

A new understanding of our galaxy's structure began in an unlikely way: on Twitter. A research effort sparked by tweets led scientists to confirm that the Milky Way's central bulge of stars forms an "X" shape. The newly published study uses data from NASA's Wide-field Infrared Survey Explorer (WISE) mission.

The unconventional collaboration started in May 2015 when Dustin Lang, an astronomer at the Dunlap Institute of the University of Toronto, posted galaxy maps to Twitter, using data from WISE's two infrared surveys of the entire sky in 2010. Infrared light allows astronomers to see the structures of galaxies in spite of dust, which blocks crucial details in visible light. Lang was using the WISE data in a project to map the web of galaxies far outside our Milky Way, which he made available through an interactive website.

But it was the Milky Way's appearance in the tweets that got the attention of other astronomers. Some chimed in about the appearance of the bulge, a football-shaped central structure that is three-dimensional compared to the galaxy's flat disk. Within the bulge, the WISE data seemed to show a surprising X structure, which had never been as clearly demonstrated before in the Milky Way. Melissa Ness, a postdoctoral researcher at the Max Planck Institute for Astronomy in Heidelberg, Germany, recognized the significance of the X shape, and contacted Lang.

The two met a few weeks later at a conference in Michigan, and decided to collaborate on analyzing the bulge using Lang's WISE maps. Their work resulted in a new study published in the Astronomical Journal confirming an X-shaped distribution of stars in the bulge.

"The bulge is a key signature of formation of the Milky Way," said Ness, the study's lead author. "If we understand the bulge we will understand the key processes that have formed and shaped our galaxy."

The Milky Way is an example of a disk galaxy -- a collection of stars and gas in a rotating disk. In these kinds of galaxies, when the thin disk of gas and stars is sufficiently massive, a "stellar bar" may form, consisting of stars moving in a box-shaped orbit around the center. Our own Milky Way has a bar, as do nearly two-thirds of all nearby disk galaxies.

Over time, the bar may become unstable and buckle in the center. The resulting "bulge" would contain stars that move around the galactic center, perpendicular to the plane of the galaxy, and in and out radially. When viewed from the side, the stars would appear distributed in a box-like or peanut-like shape as they orbit. Within that structure, according to the new study, there is a giant X-shaped structure of stars crossing at the center of the galaxy.

A bulge can also form when galaxies merge, but the Milky Way has not merged with any large galaxy in at least 9 billion years.

"We see the boxy shape, and the X within it, clearly in the WISE image, which demonstrates that internal formation processes have driven the bulge formation," Ness said. "This also reinforces the idea that our galaxy has led a fairly quiet life, without major merging events since the bulge was formed, as this shape would have been disrupted if we had any major interactions with other galaxies."

The Milky Way's X-shaped bulge had been reported in previous studies. Images from the NASA Cosmic Background Explorer (COBE) satellite's Diffuse Infrared Background Experiment suggested a boxy structure for the bulge. In 2013, scientists at the Max Planck Institute for Extraterrestrial Physics published 3-D maps of the Milky Way that also included an X-shaped bulge, but these studies did not show an actual image of the X shape. Ness and Lang's study uses infrared data to show the clearest indication yet of the X shape.

Additional research is ongoing to analyze the dynamics and properties of the stars in the Milky Way's bulge.

Collaborating on this study was unusual for Lang -- his expertise is in using computer science to understand large-scale astronomical phenomena, not the dynamics and structure of the Milky Way. But he was able to enter a new field of research because he posted maps to social media and used openly accessible WISE data.

"To me, this study is an example of the interesting, serendipitous science that can come from large data sets that are publicly available," he said. "I'm very pleased to see my WISE sky maps being used to answer questions that I didn't even know existed."