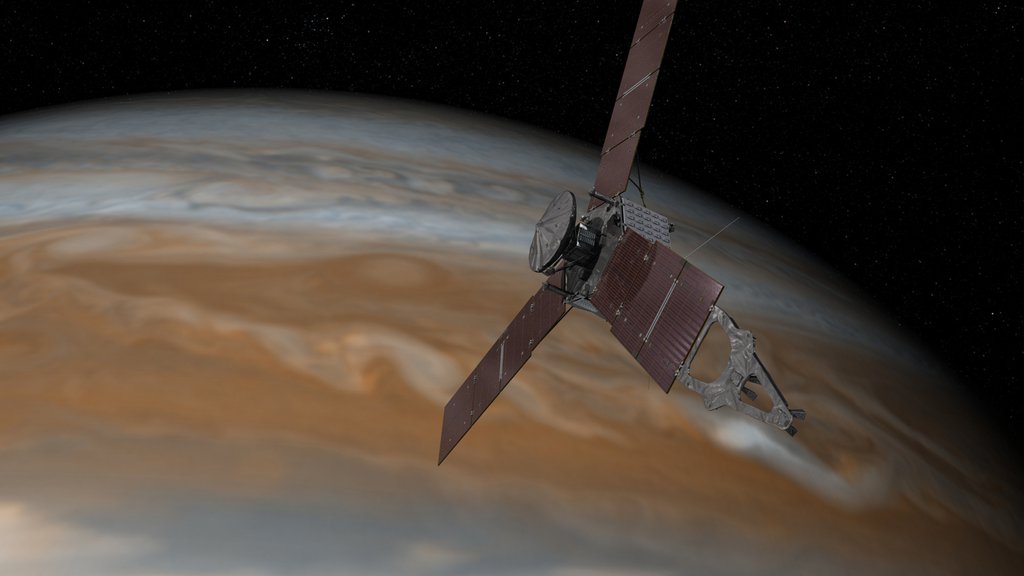 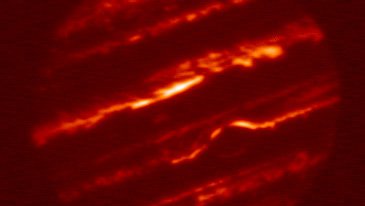 This animation of four images shows Jupiter in infrared light as seen by NASA's InfraRed Telescope Facility, or IRTF, on May 16, 2015.› Full image and caption
Credit: NASA/JPL-Caltech |

With one year remaining in a five-year trek, NASA's Juno mission team is preparing for the spacecraft's expedition to the solar system's largest planet.

› Scientists are monitoring Jupiter with Earth- and space-based telescopes to provide context for Juno's observations.

With just one year remaining in a five-year trek to Jupiter, the team of NASA's Juno mission is hard at work preparing for the spacecraft's expedition to the solar system's largest planet. The mission aims to reveal the story of Jupiter's formation and details of its interior structure. Data from Juno will provide insights about our solar system's beginnings, and what we learn from the mission will also enrich scientists' understanding of giant planets around other stars.

Juno is scheduled to arrive at Jupiter on July 4, 2016 (Pacific Daylight Time). Once it settles into orbit, the spacecraft will brave the hazards of Jupiter's intense radiation when it repeatedly approaches within a few thousand miles, or kilometers, of the cloud tops to collect its data.

Juno is the first mission dedicated to the study of a giant planet's interior, which it will do by mapping the planet's magnetic and gravity fields. The mission will also map the abundance of water vapor in the planet's atmosphere, providing the key to understanding which of several theories about the planet's formation is likely the correct one. In addition, Juno will travel through the previously unexplored region above the planet's poles, collecting the first images from there, along with data about electromagnetic forces and high-energy particles in the environment.

Although other spacecraft have previously visited Jupiter, the space around the planet is full of unknowns, especially the regions above the poles. With these challenges in mind, the Juno team has been busy fine-tuning their flight plan.

"We're already more than 90 percent of the way to Jupiter, in terms of total distance traveled," said Scott Bolton, Juno principal investigator at Southwest Research Institute, San Antonio. "With a year to go, we're looking carefully at our plans to make sure we're ready to make the most of our time once we arrive."

Following a detailed analysis by the Juno team, NASA recently approved changes to the mission's flight plan at Jupiter. Instead of taking 11 days to orbit the planet, Juno will now complete one revolution every 14 days. The difference in orbit period will be accomplished by having Juno execute a slightly shorter engine burn than originally planned.

The revised cadence will allow Juno to build maps of the planet's magnetic and gravity fields in a way that will provide a global look at the planet earlier in the mission than the original plan. Over successive orbits, Juno will build a virtual web around Jupiter, making its gravity and magnetic field maps as it passes over different longitudes from north to south. The original plan would have required 15 orbits to map these forces globally, with 15 more orbits filling in gaps to make the map complete. In the revised plan, Juno will get very basic mapping coverage in just eight orbits. A new level of detail will be added with each successive doubling of the number, at 16 and 32 orbits.

The slightly longer orbit also will provide a few extra days between close approaches to the planet for the team to react to unexpected conditions the spacecraft might experience in the complex environment very close to Jupiter.

"We have models that tell us what to expect, but the fact is that Juno is going to be immersed in a strong and variable magnetic field and hazardous radiation, and it will get closer to the planet than any previous orbiting spacecraft," said Bolton. "Juno's experience could be different than what our models predict -- that's part of what makes space exploration so exciting."

The revised plan lengthens Juno's mission at Jupiter to 20 months instead of the original 15, and the spacecraft will now complete 32 orbits instead of 30. But the extra time doesn't represent bonus science for the mission -- rather, it's an effect of the longer orbital period and the change in the way Juno builds its web around Jupiter. Basically, it will take Juno a bit longer to collect the full data set the mission is after, but it will get a low-resolution version of its final products earlier in the mission than originally planned.

NASA also recently approved a change to the spacecraft's initial orbit after Jupiter arrival, called the capture orbit. The revised plan splits the originally planned, 107-day-long capture orbit into two. The new approach will provide the Juno team a sneak preview of their science activities, affording them an opportunity to test the spacecraft's science instruments during a close approach to Jupiter before beginning the actual science phase of the mission. The original scenario called for an engine burn to ease Juno into Jupiter orbit, followed by a second burn 107 days later, putting the spacecraft into an 11-day science orbit. In the updated mission design, the orbit-insertion burn is followed 53.5 days later by a practice run at Jupiter with science instruments turned on, followed by another 53.5-day orbit before the final engine burn that places Juno into its new, 14-day science orbit.

In addition to myriad preparations being made on the engineering side, Juno's science team is also busy preparing to collect valuable data about the giant planet's inner workings. One piece of this science groundwork is a collection of images and spectra being obtained by powerful ground-based telescopes and NASA's Hubble Space Telescope (spectra are like chemical fingerprints of gases in the atmosphere). These data are intended to provide big-picture context for Juno's up-close observations of Jupiter, which is important for interpreting what the spacecraft's instruments will see.

With the countdown clock ticking -- this time, not toward launch, but toward arrival at their destination -- the Juno team is acutely aware of how quickly they're sneaking up on the giant planet. And their excitement is building.

"It's been a busy cruise, but the journey has provided our team with valuable experience flying the spacecraft and enhanced our confidence in Juno's design," said Rick Nybakken, Juno project manager at NASA's Jet Propulsion Laboratory, Pasadena, California. "Now it's time to gear up for Jupiter."

Juno is the second mission chosen as part of NASA's New Frontiers program of frequent, medium-class spacecraft missions that address high-priority exploration initiatives in the solar system. NASA's New Horizons mission, which will soon encounter Pluto, is the first New Frontiers mission; OSIRIS-REx is next in the lineup, slated to launch in 2016.