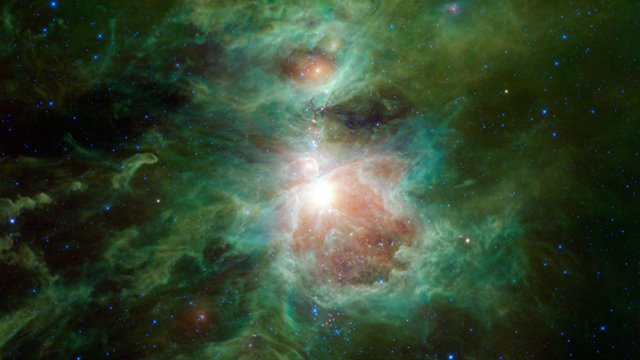 The Orion nebula is featured in this sweeping image from NASA's Wide-field Infrared Survey Explorer, or WISE. The constellation of Orion is prominent in the evening sky throughout the world from about December through April of each year. The nebula (also catalogued as Messier 42) is located in the sword of Orion, hanging from his famous belt of three stars. The star cluster embedded in the nebula is visible to the unaided human eye as a single star, with some fuzziness apparent to the most keen-eyed observers.› Full image and caption
Credit: NASA/JPL-Caltech/UCLA

The tangle of clouds and stars that lie in Orion's sword is showcased in a new, expansive view from NASA's Wide-field Infrared Survey Explorer, or WISE.

The tangle of clouds and stars that lie in Orion's sword is showcased in a new, expansive view from NASA's Wide-field Infrared Survey Explorer, or WISE.

Orion, the famous hunter, is visible in evening skies throughout the world from about December through April. The constellation appears tranquil and still to the naked eye, but lying in its sword, at what appears to be a slightly fuzzy star, is a turbulent cauldron of stellar birth.

WISE scanned the whole sky in infrared light, capturing this vast view of the dynamic region, called the Orion nebula. The telescope picked up the infrared glow from dust heated by newborn stars. The colors green and red highlight this warmed dust, while the white regions are the hottest. Massive stars burned through the dust, carving out cavities, the largest of which is seen at the center of the picture.

Astronomers think that our sun was probably born in a similar cloud some five billion years ago. Over time, the cloud would have dispersed and the stars would have drifted apart, leaving us more isolated in space. The crowded newborn stars in the Orion nebula are less than 10 million years old -- billions of years from now, they will likely spread out.

NASA's Jet Propulsion Laboratory, Pasadena, Calif., manages, and operated, WISE for NASA's Science Mission Directorate. The spacecraft was put into hibernation mode in 2011, after it scanned the entire sky twice, completing its main objectives. Edward Wright is the principal investigator and is at UCLA. The mission was selected competitively under NASA's Explorers Program managed by the agency's Goddard Space Flight Center in Greenbelt, Md. The science instrument was built by the Space Dynamics Laboratory in Logan, Utah. The spacecraft was built by Ball Aerospace & Technologies Corp. in Boulder, Colo. Science operations and data processing take place at the Infrared Processing and Analysis Center at the California Institute of Technology in Pasadena. Caltech manages JPL for NASA.