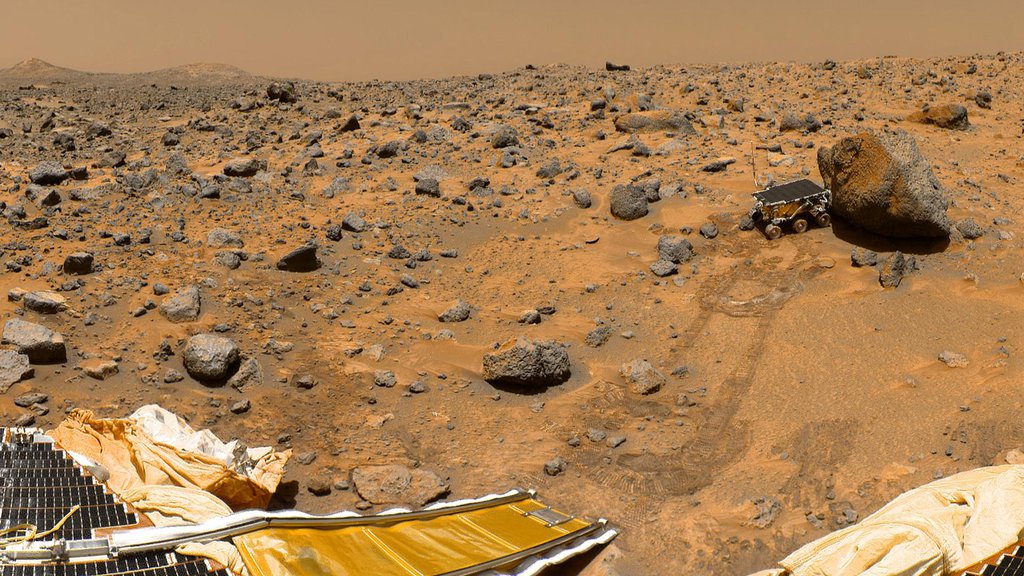 This portion of a classic 1997 panorama from the IMP camera on the mast of NASA's Mars Pathfinder lander includes "Twin Peaks" on the horizon, and the Sojourner rover next to a rock called "Yogi."› Full image and caption
Credit: NASA/JPL

As the Mars Pathfinder spacecraft approached its destination on July 4, 1997, no NASA mission had successfully reached the Red Planet in more than 20 years.

As the Mars Pathfinder spacecraft approached its destination on July 4, 1997, no NASA mission had successfully reached the Red Planet in more than 20 years.

Even the mission team anxiously awaiting confirmation that the spacecraft survived its innovative, bouncy landing could not anticipate the magnitude of the pivot about to shape the Space Age.

In the 20 years since Pathfinder's touchdown, eight other NASA landers and orbiters have arrived successfully, and not a day has passed without the United States having at least one active robot on Mars or in orbit around Mars.

The momentum propelled by Pathfinder's success is still growing. Five NASA robots and three from other nations are currently examining Mars. The two decades since Pathfinder's landing have taken us about halfway from the first Mars rover to the first astronaut bootprint on Mars, proposed for the 2030s.

"Pathfinder initiated two decades of continuous Mars exploration bringing us to the threshold of sample return and the possibility of humans on the first planet beyond Earth," said Michael Meyer, lead scientist for NASA's Mars Exploration Program at the agency's headquarters in Washington.

Pathfinder's rover, named Sojourner for the civil-rights crusader Sojourner Truth, became the best-known example of the many new technologies developed for the mission. Though Sojourner was only the size of a microwave oven, its six-wheel mobility system and its portable instrument for checking the composition of rocks and soil were the foundation for the expanded size and capabilities of later Mars rovers.

"Without Mars Pathfinder, there could not have been Spirit and Opportunity, and without Spirit and Opportunity, there could not have been Curiosity," Pathfinder Project Scientist Matt Golombek of NASA's Jet Propulsion Laboratory, Pasadena, California, said of the subsequent generations of Mars rovers. JPL is now developing another Mars rover for launch in 2020.

NASA planned Pathfinder primarily as a technology demonstration mission, but it also harvested new knowledge about Mars, from the planet's iron core to its atmosphere, and from its wetter and warmer past to its arid modern climate.

The space agency was shifting from less-frequent, higher-budget missions to a strategy of faster development and lower budgets. Pathfinder succeeded within a real-year, full-mission budget of $264 million, a small fraction of the only previously successful Mars lander missions, the twin Vikings of 1976.

"We needed to invent or re-invent 25 technologies for this mission in less than three years, and we knew that if we blew the cost cap, the mission would be cancelled," said JPL's Brian Muirhead, flight system manager and deputy project manager for Pathfinder. "Everybody who was part of the Mars Pathfinder Project felt we'd done something extraordinary, against the odds."

Crucial new technologies included an advanced onboard computer, the rover and its deployment system, solid-fuel rockets for deceleration, and airbags inflating just before touchdown to cushion the impact of landing. NASA re-used most of the Pathfinder technologies to carry out the Mars Exploration Rover Project, which landed Spirit and Opportunity on Mars in 2004.

"On the morning of July Fourth, 1997, we were in our tiny mission-control area waiting to see the signal that would confirm Pathfinder had survived its atmospheric entry and landing, and that it was transmitting from the surface of Mars," Muirhead said. "We saw that tiny spike in the signal coming through the Deep Space Network, and we knew."

Pathfinder quickly provided the first fresh images from Mars directly available to the public over the still-young World Wide Web. The mission set a web-traffic record at the time with more than 200 million hits from July 4 to July 8, 1997.

The lander and rover operated for three months -- triple the planned mission for the lander and 12 times the rover's planned mission of one week. This longevity enabled Pathfinder to overlap the Sept. 12, 1997, arrival of NASA's Mars Global Surveyor orbiter. That orbiter, in turn, operated at Mars for more than nine years, overlapping with arrivals of two later orbiters -- Mars Odyssey in 2001 and Mars Reconnaissance Orbiter in 2006, which are both still active -- and the 2004 landings of two rovers, one of which -- Opportunity -- is still active. Subsequent successful NASA missions of the post-Pathfinder era have been the Phoenix lander, Curiosity rover and MAVEN orbiter.

Twenty straight years of studying Mars have yielded major advances in understanding active processes on modern Mars, wet environments favorable for life on ancient Mars, and how the planet changed. These two decades of continuous robotic presence have built on the science and engineering gains from NASA's Mars Mariner and Viking missions of the 1960s and '70s.

The advances in understanding Mars during the past two decades have set the stage for even greater advances in the next two decades, particularly in efforts to determine whether life has ever existed on Mars and to put humans on Mars. For more information about past, present and future exploration of Mars, visit:

For more information about the Mars Pathfinder mission, see: