Why NASA Is Trying to Crash Land on Mars 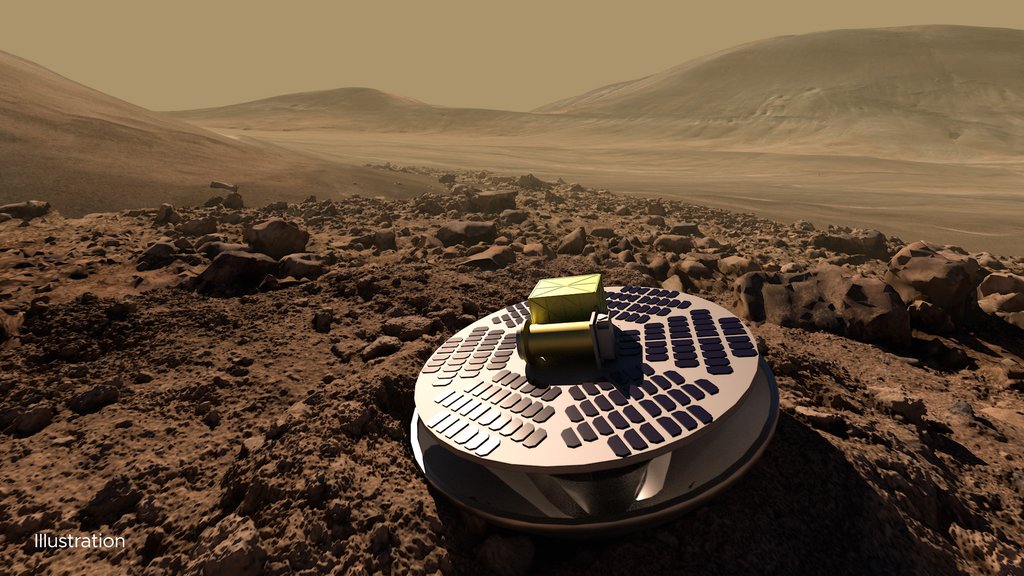 An illustration of SHIELD, a Mars lander concept that would allow lower-cost missions to reach the Red Planet’s surface by safely crash landing, using a collapsible base to absorb the impact. 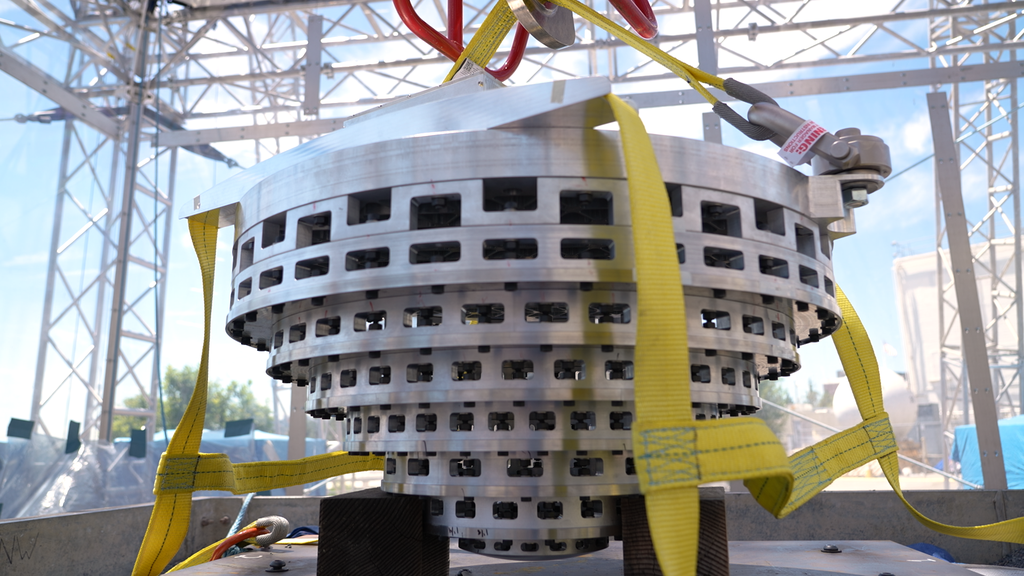 This prototype base for SHIELD – a collapsible Mars lander that would enable a spacecraft to intentionally crash land on the Red Planet, absorbing the impact – was tested in a drop tower at JPL on Aug. 12 to replicate the impact it would encounter landing on Mars. 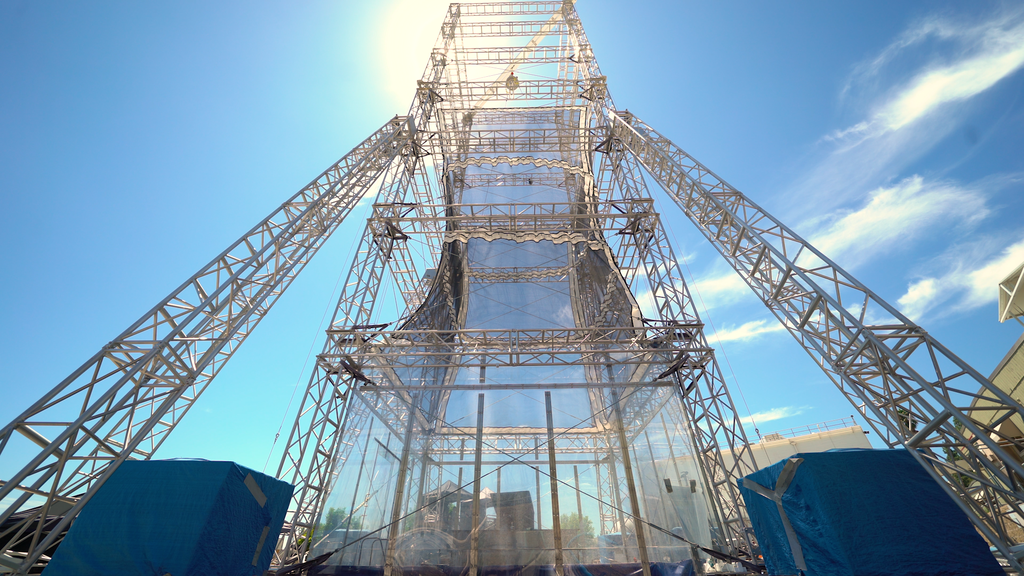 This drop tower at JPL includes a bow launch system, which can hurl test articles 110 mph into the ground, re-creating the forces they would experience during a Mars landing.

Like a car’s crumple zone, the experimental SHIELD lander is designed to absorb a hard impact.

NASA has successfully touched down on Mars nine times, relying on cutting-edge parachutes, massive airbags, and jetpacks to set spacecraft safely on the surface. Now engineers are testing whether or not the easiest way to get to the Martian surface is to crash.

Rather than slow a spacecraft’s high-speed descent, an experimental lander design called SHIELD (Simplified High Impact Energy Landing Device) would use an accordion-like, collapsible base that acts like the crumple zone of a car and absorbs the energy of a hard impact.

The new design could drastically reduce the cost of landing on Mars by simplifying the harrowing entry, descent, and landing process and expanding options for possible landing sites.

SHIELD is a Mars lander concept that could allow lower-cost missions to visit the Martian surface by using an impact-absorbing, collapsible base to safely crash land.

“We think we could go to more treacherous areas, where we wouldn’t want to risk trying to place a billion-dollar rover with our current landing systems,” said SHIELD’s project manager, Lou Giersch of NASA’s Jet Propulsion Laboratory in Southern California. “Maybe we could even land several of these at different difficult-to-access locations to build a network.”

Much of SHIELD’s design borrows from work done for NASA’s Mars Sample Return campaign. The first step in that campaign involves the Perseverance rover collecting rock samples in airtight metal tubes; a future spacecraft will carry those samples back to Earth in a small capsule and safely crash land in a deserted location.

Studying approaches for that process led engineers to wonder if the general idea was reversible, said Velibor Ćormarković, SHIELD team member at JPL.

“If you want to land something hard on Earth, why can’t you do it the other way around for Mars?” he said. “And if we can do a hard landing on Mars, we know SHIELD could work on planets or moons with denser atmospheres.”

To test the theory, engineers needed to prove SHIELD can protect sensitive electronics during landing. The team used a drop tower at JPL to test how Perseverance’s sample tubes would hold up in a hard Earth landing. Standing nearly 90 feet (27 meters), it features a giant sling – called a bow launch system – that can hurl an object into the surface at the same speeds reached during a Mars landing.

Ćormarković previously worked for the auto industry, testing cars that carried crash dummies. In some of those tests, the cars ride on sleds that are accelerated to high speeds and crashed into a wall or deformable barrier. There are a number of ways to accelerate the sleds, including using a sling akin to the bow launch system.

“The tests we’ve done for SHIELD are kind of like a vertical version of the sled tests,” Ćormarković said. “But instead of a wall, the sudden stop is due to an impact into the ground.”

On Aug. 12, the team gathered at the drop tower with a full-size prototype of SHIELD’s collapsible attenuator – an inverted pyramid of metal rings that absorb impact. They hung the attenuator on a grapple and inserted a smart phone, a radio, and an accelerometer to simulate the electronics a spacecraft would carry.

Sweating in the summer heat, they watched SHIELD slowly rise to the top of the tower.

“Hearing the countdown gave me goose bumps,” said Nathan Barba, another SHIELD project member at JPL. “The whole team was excited to see if the objects inside the prototype would survive the impact.”

Previous SHIELD tests used a dirt “landing zone,” but for this test, the team laid a steel plate 2 inches (5 centimeters) thick on the ground to create a landing harder than a spacecraft would experience on Mars. The onboard accelerometer later revealed SHIELD impacted with a force of about 1 million newtons – comparable to 112 tons smashing against it.

High-speed camera footage of the test shows that SHIELD impacted at a slight angle, then bounced about 3.5 feet (1 meter) into the air before flipping over. The team suspects the steel plate caused the bounce, since no bounce occurred in the earlier tests.

Upon opening the prototype and retrieving the simulated electronic payload, the team found the onboard devices – even the smart phone – survived.

“The only hardware that was damaged were some plastic components we weren’t worried about,” Giersch said. “Overall, this test was a success!”

The next step? Designing the rest of a lander in 2023 and seeing just how far their concept can go.