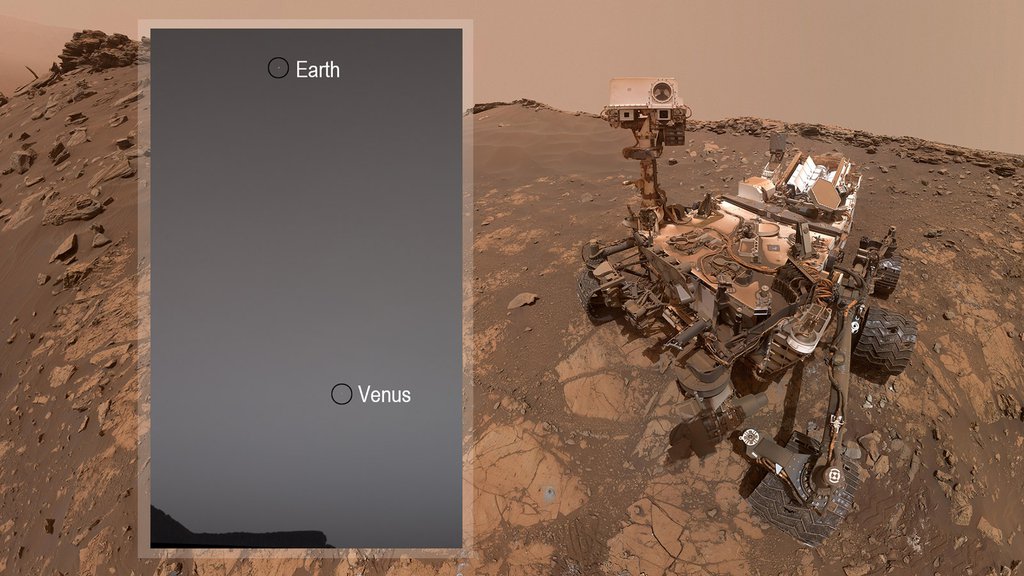 Two images of the night sky were combined to show Earth and Venus as seen by NASA's Curiosity Mars rover on June 5, 2020, the mission's 2,784th Martian day, or sol. The planets appear as pinpoints of light owing to a combination of distance and dust in the air. Mars' Tower Butte is visible at bottom. Credit: NASA/JPL-Caltech/MSSS Full Image Details

This new portrait of the Red Planet's neighbors was taken during a time when there's more dust in the air on Mars.

NASA's Curiosity Mars rover occasionally stops to stargaze. Recently, it captured a shot of Earth and Venus in the Red Planet's night sky.

Curiosity aimed its Mast Camera, or Mastcam, at the heavens about 75 minutes after sunset on June 5, 2020, the 2,784th Martian day, or sol, of the mission. A two-image twilight panorama reveals Earth in one frame and Venus in the other. Both planets appear as mere pinpoints of light, owing to a combination of distance and dust in the air; they would normally look like very bright stars.

The brief photo session was partly to gauge the twilight brightness: During this time of year on Mars, there's more dust in the air to reflect sunlight, making it particularly bright, said Mastcam co-investigator Mark Lemmon of the Space Science Institute in Boulder, Colorado.

"Even moderately bright stars were not visible when this image of Venus was taken," Lemmon said. "Earth also has bright twilights after some large volcanic eruptions."

When Curiosity's Mastcam imaged Earth and its Moon in 2014, the color and brightness of the sky were significantly different than from these most recent images because of all the high-altitude dust in the Martian air right now.

At the bottom of the new images is the top of a rock feature called Tower Butte in the "clay-bearing unit," which Curiosity has been exploring for more than a year. Since landing in 2012, the rover has captured blue Martian sunsets and passing asteroids as well as Mercury and Mars' two moons, Phobos and Deimos, transiting across the Sun.