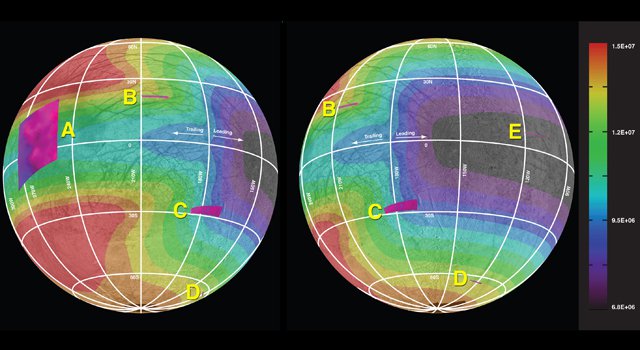 This graphic of Jupiter's moon Europa maps a relationship between the amount of energy deposited onto the moon from charged-particle bombardment and the chemical contents of ice deposits on the surface in five areas of the moon (labeled A through E).› Full image and caption
Credit: NASA/JPL-Caltech/Univ. of Ariz./JHUAPL/Univ. of Colo.

A new look at data from NASA's Galileo mission yields pointers for where on Europa's surface the watery interior of this moon of Jupiter is best revealed.

The surface of Jupiter's moon Europa exposes material churned up from inside the moon and also material resulting from matter and energy coming from above. If you want to learn about the deep saltwater ocean beneath this unusual world's icy shell -- as many people do who are interested in possible extraterrestrial life -- you might target your investigation of the surface somewhere that has more of the up-from-below stuff and less of the down-from-above stuff.

New analysis of observations made more than a decade ago by NASA's Galileo mission to Jupiter helps identify those places.

"We have found the regions where charged electrons and ions striking the surface would have done the most, and the least, chemical processing of materials emplaced at the surface from the interior ocean," said J. Brad Dalton of NASA's Jet Propulsion Laboratory, Pasadena, Calif., lead author of the report published recently in the journal Planetary and Space Science. "That tells us where to look for materials representing the most pristine ocean composition, which would be the best places to target with a lander or study with an orbiter."

Europa is about the size of Earth's moon and, like our moon, keeps the same side toward the planet it orbits. Picture a car driving in circles around a mountain with its left-side windows always facing the mountain.

Europa's orbit around Jupiter is filled with charged, energetic particles tied to Jupiter's powerful magnetic field. Besides electrons, these particles include ions of sulfur and oxygen originating from volcanic eruptions on Io, a neighboring moon.

The magnetic field carrying these energetic particles sweeps around Jupiter faster than Europa orbits Jupiter, in the same direction: about 10 hours per circuit for the magnetic field versus about 3.6 days for Europa's orbit. So, instead of our mountain-circling car getting bugs on the front windshield, the bugs are plastered on the back of the car by a "wind" from behind going nearly nine times faster than the car. Europa has a "leading hemisphere" in front and a "trailing hemisphere" in back.

Earlier studies had found more sulfuric acid being produced toward the center of the trailing hemisphere than elsewhere on Europa's surface, interpreted as resulting from chemistry driven by sulfur ions bombarding the icy surface.

Dalton and his co-authors at JPL and at Johns Hopkins University Applied Physics Laboratory, Laurel, Md., examined data from observations by Galileo's near infrared mapping spectrometer of five widely distributed areas of Europa's surface. The spectra of reflected light from frozen material on the surface enabled them to distinguish between relatively pristine water and sulfate hydrates. These included magnesium and sodium sulfate salt hydrates, and hydrated sulfuric acid. They compared the distributions of these substances with models of how the influxes of energetic electrons and of sulfur and oxygen ions are distributed around the surface of Europa.

"The close correlation of electron and ion fluxes with the sulfuric acid hydrate concentrations indicates that the surface chemistry is affected by these charged particles," says Dalton. "If you are interested in the composition and habitability of the interior ocean, the best places to study would be the parts of the leading hemisphere we have identified as receiving the fewest electrons and having the lowest sulfuric acid concentrations."

Surface deposits in these areas are most likely to preserve the original chemical compounds that erupted from the interior. Dalton suggests that any future spacecraft missions to Europa should target these deposits for study from orbit, or even attempt to land there.

Dalton said, "The darkest material, on the trailing hemisphere, is probably the result of externally-driven chemical processing, with little of the original oceanic material intact. While investigating the products of surface chemistry driven by charged particles is still interesting from a scientific standpoint, there is a strong push within the community to characterize the contents of the ocean and determine whether it could support life. These kinds of places just might be the windows that allow us to do that."

The study was funded by NASA's Outer Planets Research Program. NASA's Galileo mission, launched in 1989, orbited Jupiter, investigating the planet and its diverse moons from 1995 to 2003. JPL, a division of the California Institute of Technology in Pasadena, managed Galileo for NASA's Science Mission Directorate, Washington.