Where Are Stars Made? NASA's Spitzer Spies a Hot Spot 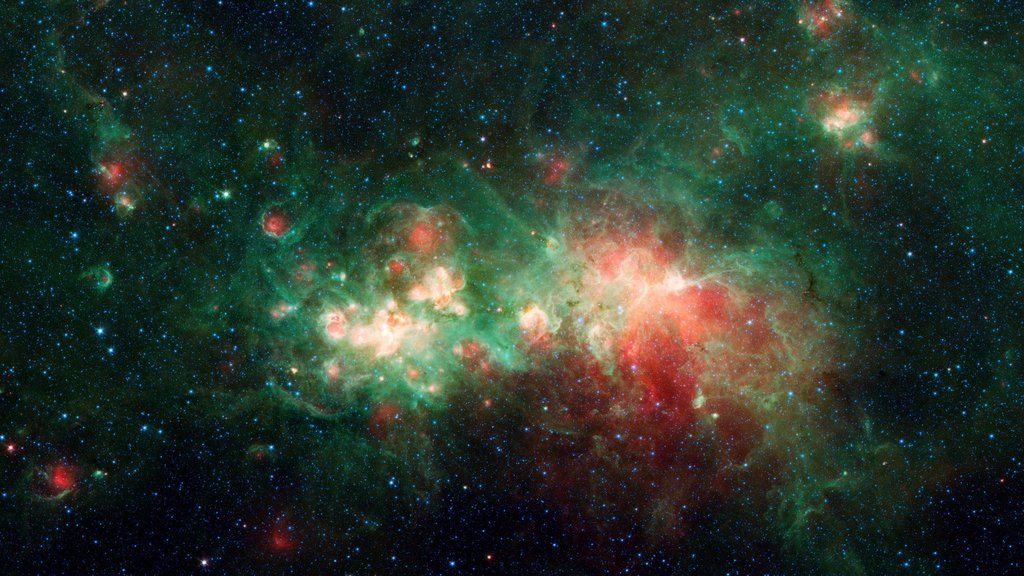 The most massive stars in the universe are born inside cosmic clouds of gas and dust, where they leave behind clues about their lives for astronomers to decode.

The nebula known as W51 is one of the most active star-forming regions in the Milky Way galaxy. First identified in 1958 by radio telescopes, it makes a rich cosmic tapestry in this image from NASA's recently retired Spitzer Space Telescope.

Located about 17,000 light-years from Earth, in the direction of the constellation Aquila in the night sky, W51 is about 350 light-years - or about 2 quadrillion miles - across. It is almost invisible to telescopes that collect visible light (the kind human eyes detect), because that light is blocked by interstellar dust clouds that lie between W51 and Earth. But longer wavelengths of light, including radio and infrared, can pass unencumbered through the dust. When viewed in infrared by Spitzer, W51 is a spectacular sight: Its total infrared emission is the equivalent of 20 million Suns.

If you could see it with your naked eye, this dense cloud of gas and dust would appear about as large as the full Moon. The Orion Nebula - another well-known star-forming region and a favorite observing target for amateur astronomers - occupies about the same size area in the sky. But W51 is actually much farther from Earth than Orion and thus much larger, and it's about 75 times more luminous. While Orion contains four known O-type stars - the most massive stars in the universe - W51 contains over 30.

"Star factories" like this one can operate for millions of years. The cavernous red region on the right side of W51 is older, evident in the way it has already been carved out by winds from generations of massive stars (those at least 10 times the mass of our Sun). The dust and gas in the region are swept around even more when those stars die and explode as supernovas. On the nebula's younger left side, many stars are just beginning to clear away the gas and dust in the same way the stars in the older region have done. It's apparent that many of these young stars are in the process of forming bubbles of empty space around themselves.

This image was taken as part of a major observation campaign by Spitzer in 2004 to map the large-scale structure of the Milky Way galaxy - a considerable challenge because Earth lies inside it. Called the Galactic Legacy Infrared Mid-Plane Survey Extraordinaire (GLIMPSE), the survey also turned up valuable data on many wonders within the Milky Way, including images of multiple stellar factories like W51 that were hidden by dust from visible-light observatories.

"The really spectacular images provided by Spitzer via the GLIMPSE survey ­- in concert with data from many other, complementary telescopes - give us insight into how massive stars form in our Milky Way, and then how their powerful winds and radiation interact with the remaining ambient material," said Breanna Binder, an assistant professor of physics and astronomy at California State Polytechnic University, Pomona, who studies the life cycles of massive stars. "We can't observe star-forming regions in other galaxies in anywhere near the level of detail that we can in our own galaxy. So regions like W51 are really important for advancing our understanding of star formation in the Milky Way, which we can then extrapolate to how star formation proceeds in other, nearby galaxies."

NASA's Spitzer Space Telescope launched 17 years ago this week, on Aug. 25, 2003. The spacecraft was retired on Jan. 30, 2020. Though the mission has concluded, the entire body of scientific data collected by Spitzer during its lifetime is available to the public via the Spitzer data archive, housed at the Infrared Science Archive at IPAC at Caltech in Pasadena, California.

NASA's Jet Propulsion Laboratory, a division of Caltech, managed Spitzer mission operations for NASA's Science Mission Directorate in Washington. Science operations were conducted at the Spitzer Science Center at IPAC at Caltech. Spacecraft operations were based at Lockheed Martin Space in Littleton, Colorado.