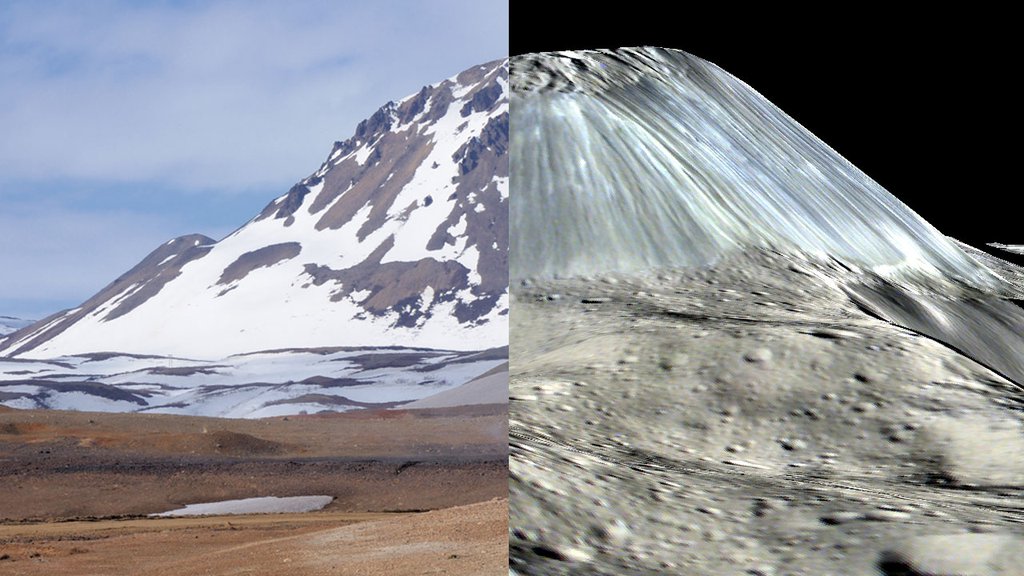 When you see these prominent features of Ceres, you might recognize some of their Earthly cousins.

With its dark, heavily cratered surface interrupted by tantalizing bright spots, Ceres may not remind you of our home planet Earth at first glance. The dwarf planet, which orbits the Sun in the vast asteroid belt between Mars and Jupiter, is also far smaller than Earth (in both mass and diameter). With its frigid temperature and lack of atmosphere, we're pretty sure Ceres can't support life as we know it.

But these two bodies, Ceres and Earth, formed from similar materials in our solar system. And, after combing through thousands of images from NASA's Dawn spacecraft, which has been orbiting Ceres since 2015, scientists have spotted many features on Ceres that look like formations they've seen on Earth.

By looking at similar features on different bodies -- what scientists call "analogs" -- we can learn more about the origins and evolution of these bodies over time. Check out these prominent features of Ceres, and see if you recognize any of their earthly cousins!

As Dawn approached Ceres in early 2015, two mysterious gleaming beacons stood out in images: the "bright spots" of Occator Crater. When the spacecraft spiraled into orbits closer to Ceres, higher-resolution images revealed that there are not just two spots, but many. The center of Occator contains a bright, 2,000-foot-high (500-meter-high) dome called the Cerealia Dome, which is covered with bright material. The bright material on top of the dome is called the Cerealia Facula. A collection of smaller bright regions called Vinalia Faculae is clustered on the eastern side of the crater floor.

Thanks to Dawn's observations, scientists think the bright material is made of sodium carbonate and mineral salts. Moreover, Dawn scientists think the Cerealia Dome formed from briny liquid or mushy ice rising from below the surface -- what we call "hydrothermal" activity -- because it involves heat (thermal) and water (hydro).

When groundwater on Earth freezes, it can push up against the overlying soil, creating a dome-like structure called a "pingo." These structures appear near the Arctic regions of Earth, including Canada's Pingo National Landmark. "The dimensions, shape and 'fractured' top of a pingo resemble the Cerealia Dome, which may have formed from alternating cycles of ice 'punching' up and effusing onto the surface of Ceres," said Lynnae Quick, planetary scientist at the Smithsonian Institution's National Air and Space Museum in Washington.

Panum Crater at the foot of the Sierra Nevada Mountains in California has rounded edges and fractured summits that remind scientists of the Cerealia Dome, too. Both the Panum dome and the Cerealia dome sit inside pits. Lassen Peak in California, a lava dome, also has a similar shape, as does the dome in the Mount Saint Helens caldera in the state of Washington.

Like Occator Crater, Searles Lake in California's Mojave Desert is famous for bright evaporite minerals -- that is, minerals that remain long after the evaporation of saltwater. Once a lake fed by water from the Sierra Nevada mountains, today Searles is a dried-out lakebed with white mineral deposits. Mining operations collect minerals rich in sodium and potassium for industrial use. These minerals are mostly found in subsurface brines that are pumped to the surface.

Ahuna Mons sticks out on Ceres as a tall, lonely mountain with bright material dusting its slopes. Similar to the material found in Occator, the bright coating is made of sodium carbonate. The leading hypothesis is that Ahuna Mons is a cryovolcano -- a very cold volcano that has erupted with salty water, mud and volatile materials instead of molten rock. Ahuna Mons rises an average of 2.5 miles (4 kilometers) above the surrounding surface, about the same as the height of the summit of Mount Rainier in Washington State. Ahuna Mons doesn't appear to be associated with any impacts, suggesting that Ceres must have had cryovolcanic activity in the recent past.

While nothing in the solar system is exactly like Ahuna Mons, the Hlíðarfjall dome in Iceland has a similar shape. Both have loose, fine-grained material, and are similar in their proportion of heights and widths. But these mountains are very different in composition. The Icelandic dome formed by silicate volcanic material, whereas Ahuna Mons formed primarily from water and salt, with a minor contribution from silicate minerals. "Despite the chemical differences, however, the materials on Earth and Ceres behave similarly when they protrude out of the crust to form volcanoes," said Ottaviano Ruesch, research scientist at the European Space Agency in the Netherlands.

Another volcanic structure reminiscent of Ahuna Mons is Chaitén Dome in Chile, located within a caldera, a cauldron-like volcanic feature. Beyond Earth, the Compton-Belkovich volcanic complex on the Moon contains a dome that seems to have formed by silicate materials erupting. "This means that silicic dome formation is a process not limited to Earth," Ruesch said.

Ceres is full of craters large and small, but it also has chains of small bowl-shaped or elliptical pits that did not result from impacts. Pit chains, such as Samhain Catenae, are caused by fractures or faults in the subsurface, which formed up to a billion years ago. When the fractures or faults leave behind empty space under the surface, loose material falls in from above -- forming the pits at the surface.

Northern Iceland has a system of pit chains related to faults and fractures. Scientists believe these pit chains formed because of seismic events in the 1970s. A 2011 study led by David Ferrill of the Southwest Research Institute in San Antonio finds that the pits resulted from poorly consolidated material falling down into subterranean cavities, which were produced by faults and fractures. "It's possible that stresses derived from material upwelling from deeper within Ceres resulted in parts of the crust being pulled apart, which may have formed the Samhain Catenae," said Jennifer Scully, Dawn scientist at NASA's Jet Propulsion Laboratory, Pasadena, California. Scientists also have mapped similar pit chains on Mars and other solar system bodies.

Haulani Crater, 21 miles (34 kilometers) in diameter, with sharp rims and bright material, is one of the youngest craters on Ceres. Some flow features are associated with a mountainous ridge in the center, while other flow features run outward from the crater's rim toward the surrounding area. Pitted terrain on the crater's floor and northern rim probably formed when an impacting body caused water under the surface -- which had been locked in Ceres' crust -- to vaporize. That's why pitted terrain is additional evidence for water ice as a key component of the crust.

Ries Crater in southern Germany was formed from an impacting meteorite about 15 million years ago. It is an example of a "rampart crater," a crater whose material flowed due to the presence of volatile materials, such as water, when the meteorite hit. Although Ceres does not have craters that are exactly "rampart" in nature, some of the craters on Ceres such as Haulani do have flow features in their ejecta blankets -- the layers of rock that were overturned and deposited around the crater as during the impact event. "Ries also has clusters of pipe-like structures in the bedrock that are the basis for our understanding of the formation of pitted materials on Mars, Vesta, and Ceres," said Hanna Sizemore, research scientist at the Planetary Science Institute, Tucson, Arizona.

Dawn has revealed many landslides on Ceres, which may have been shaped by the presence of water ice. This image shows three different kinds of landslides on Ceres. At left, Ghanan Crater hosts an example of a Type I landslide, which is relatively round and large and has thick deposits, or "toes," at its end. Type II and Type III features are shown in the middle and right of this image respectively. Scientists think Type I landslides form in areas where the ground is rich in ice, which may occur near Ceres' poles. Type II landslides are often thinner and longer than Type 1. Type III landslides form in ice-rich ejected material from impacts.

Landslides can occur anywhere on Earth where the ground along a slope becomes unstable, such as last year's landslide in northern California. A hillside called Mud Creek collapsed in May 2017 after the area had received substantial rainfall, increasing the amount of groundwater in the area. The way the rock and dirt slid down over Highway 1 into the ocean resembles the way the mixture of ice and rock skidded down Ghanan Crater on Ceres. In some cases, water or ice in the ground can increase the likeliness of landslide occurrence