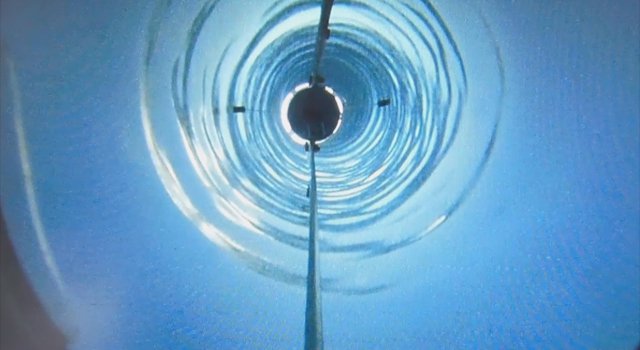 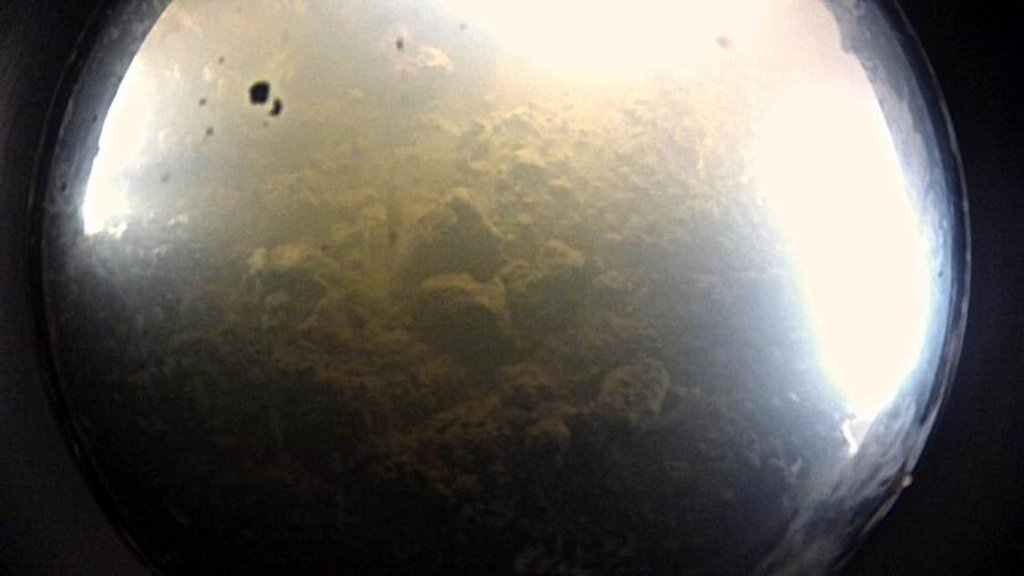 First view of the bottom of Antarctic subglacial Lake Whillans, captured by the high-resolution imaging system aboard the Micro-Submersible Lake Exploration Device. The imagery and other data from the mini-sub were used to survey the lake floor and help the WISSARD team verify that the rest of their instruments could be safely deployed into the lake.
Credit: NASA/JPL-Caltech 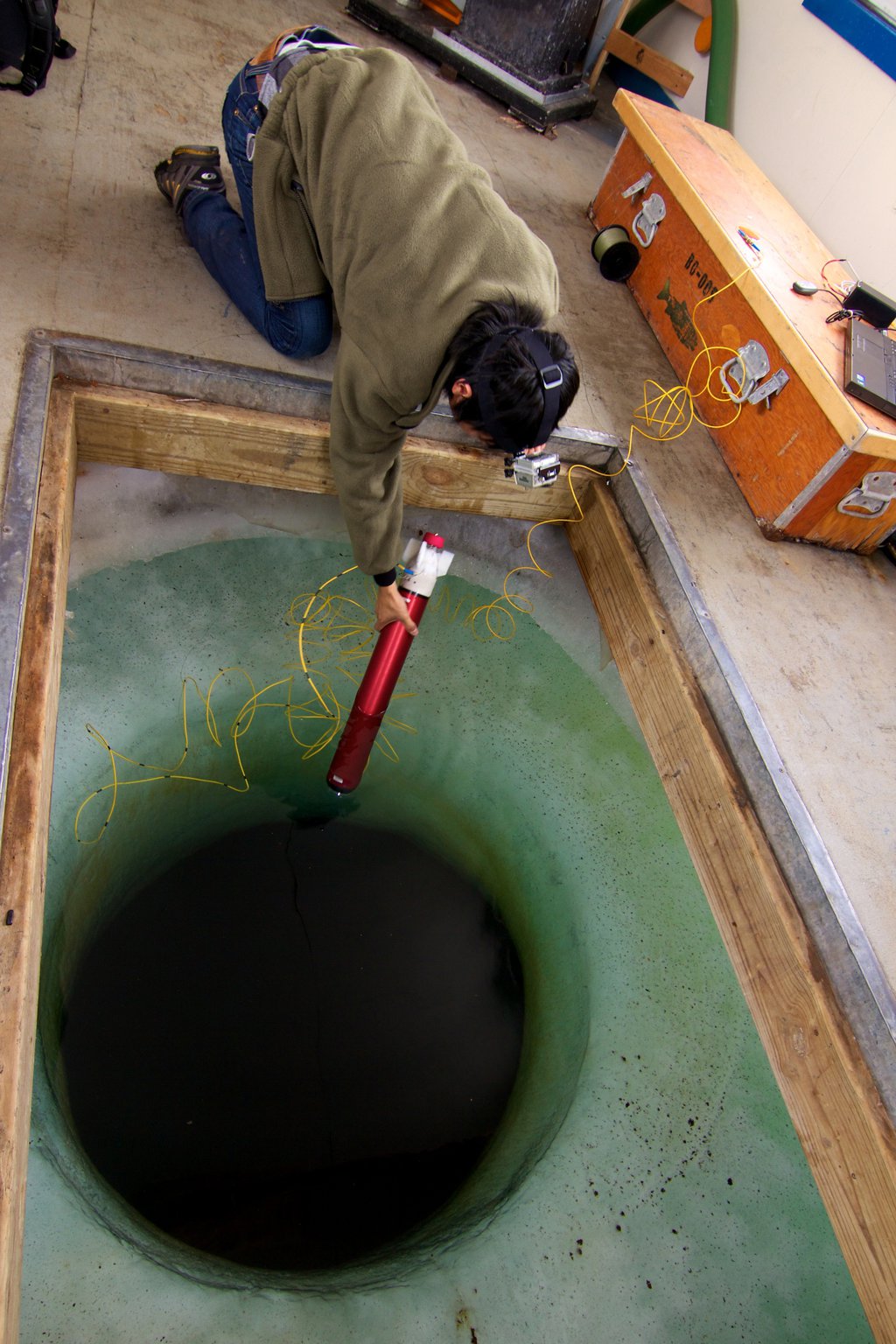 A student tests the Micro-Submersible Lake Exploration Device used to access Antarctic subglacial Lake Whillans. About the size and shape of a baseball bat, the robotic sub is equipped with hydrological chemical sensors and a high-resolution imaging system. The instruments and cameras were used to characterize the geology, hydrology and chemical characteristics of the lake. JPL researcher Alberto Behar supervised a team of students from Arizona State University, Tempe, in designing, developing, testing and operating the sub.
Credit: NASA/JPL-Caltech

A mini-submarine designed and funded by NASA played a key role in a recent international expedition to explore a remote subglacial lake beneath the frozen Antarctic ice sheet.

When researcher Alberto Behar from NASA's Jet Propulsion Laboratory in Pasadena, Calif., joined an international Antarctic expedition last month on a trek to investigate a subglacial lake, he brought with him a unique instrument designed and funded by NASA to help the researchers study one of the last unexplored aquatic environments on Earth.

Called the Micro-Submersible Lake Exploration Device, the instrument was a small robotic sub about the size and shape of a baseball bat. Designed to expand the range of extreme environments accessible by humans while minimally disturbing the environment, the sub was equipped with hydrological chemical sensors and a high-resolution imaging system. The instruments and cameras characterize the geology, hydrology and chemical characteristics of the sub's surroundings. Behar supervised a team of students from Arizona State University, Tempe, in designing, developing, testing and operating the first-of-its-kind sub.

"This is the first instrument ever to explore a subglacial lake outside of a borehole," Behar said. "It's able to take us places that are inaccessible by any other instruments in existence."

The sub was deployed by the U.S. team of the international Whillans Ice Stream Subglacial Access Research Drilling (WISSARD) project. The project's objective was to access subglacial Lake Whillans, located more than 2,000 feet (610 meters) below sea level, deep within West Antarctica's Ross Ice Shelf, nearly 700 miles (about 1,125 kilometers) from the U.S. McMurdo Station. The 20-square-mile (50-square-kilometer) lake is totally devoid of sunlight and has a temperature of 31 degrees Fahrenheit (minus 0.5 degrees Celsius). It is part of a vast Antarctic subglacial aquatic system that covers an area about the size of the continental United States.

The WISSARD team included researchers from eight U.S. universities and two collaborating international institutions. They used specialized tools to get clean samples of subglacial lake water and sediments, survey the lake floor with video and characterize the biological, chemical and physical properties of the lake and its surroundings. Their research is designed to gain insights into subglacial biology, climate history and modern ice sheet behavior.

The instrument consists of a "mothership" connected to a deployment device that houses the submarine. The sub is designed to operate at depths of up to three-quarters of a mile (1.2 kilometers) and within a range of 0.6 miles (1 kilometer) from the bottom of the borehole that was drilled through the ice to reach the lake. It transmits real-time high-resolution imagery, salinity, temperature and depth measurements to the surface via fiber-optic cables.

In a race against time and the elements to access the lake before the end of the current Antarctic field season, the WISSARD team spent three days in January drilling a 2,600-foot-deep (800-meters), 20-inch-wide (50-centimeters) borehole into the lake, which they reached on Jan. 28.

Like Alice down the rabbit hole, the sub was then sent down the borehole, where it was initially used to guide drilling operations. When the instrument finally reached the lake, the team used its imagery to survey the lake floor. The data enabled the team to verify that the rest of the project's instruments could be safely deployed into the lake. The WISSARD team was then able to proceed with its next phase: collecting lake water samples to search for microbial life.

And that search has apparently paid off. Earlier this month, the team reported that the lake water did indeed contain living bacteria, a discovery that might hold important implications for the search for life elsewhere in the universe.

To learn more about the expedition, watch this short video narrated by Behar: http://www.jpl.nasa.gov/video/?id=1201 .

Core funding for WISSARD and the Micro-Submersible Lake Exploration Device was provided by the National Science Foundation-Office of Polar Programs. The sub was funded by NASA's Cryospheric Sciences and Astrobiology programs. Additional funds for WISSARD instrument development were provided by the National Oceanic and Atmospheric Administration and the Gordon and Betty Moore Foundation.