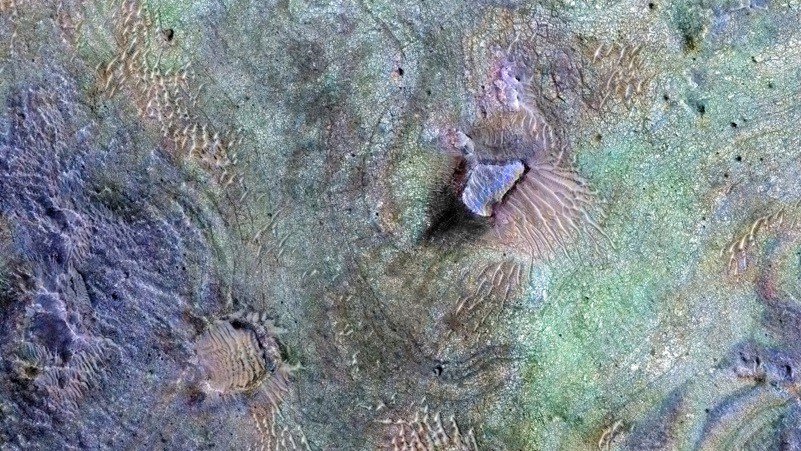 This view combines information from two instruments on a NASA Mars orbiter to map color-coded composition over the shape of the ground within the Nili Fossae plains region of Mars.› Full image and caption
Credit: NASA/JPL-Caltech/JHUAPL/Univ. of Arizona 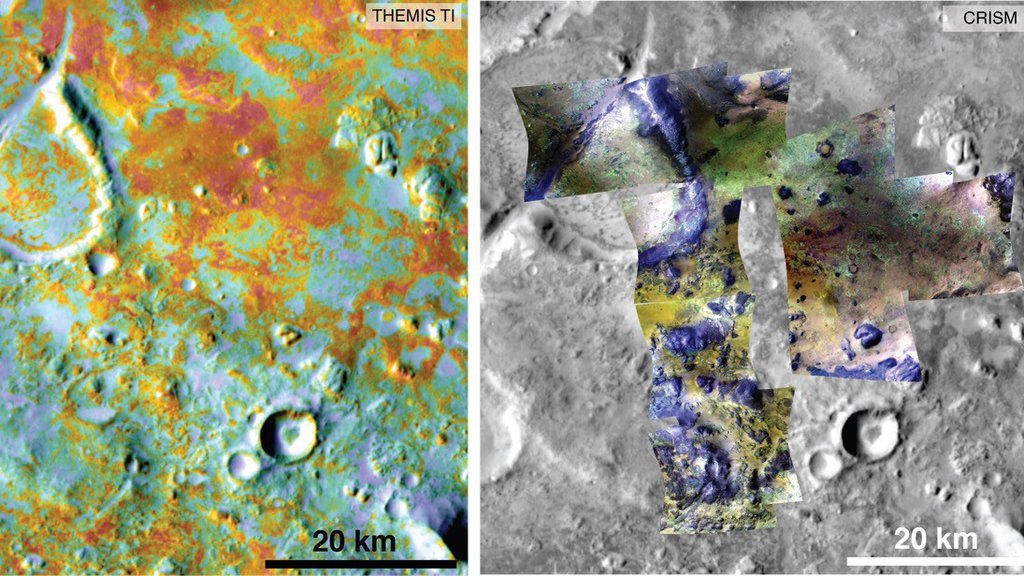 Researchers estimating the amount of carbon held in the ground at the largest known carbonate deposit on Mars used data from five instruments on three NASA Mars orbiters, including physical properties from THEMIS (left) and mineral information from CRISM (right).› Full image and caption
Credit: NASA/JPL-Caltech/ASU/JHUAPL

The amount of Martian atmosphere trapped by mineral formation appears inadequate to account for a warm environment when rivers cut valleys on ancient Mars.

Scientists may be closer to solving the mystery of how Mars changed from a world with surface water billions of years ago to the arid Red Planet of today.

A new analysis of the largest known deposit of carbonate minerals on Mars suggests that the original Martian atmosphere may have already lost most of its carbon dioxide by the era of valley network formation.

"The biggest carbonate deposit on Mars has, at most, twice as much carbon in it as the current Mars atmosphere," said Bethany Ehlmann of the California Institute of Technology and NASA Jet Propulsion Laboratory, both in Pasadena. "Even if you combined all known carbon reservoirs together, it is still nowhere near enough to sequester the thick atmosphere that has been proposed for the time when there were rivers flowing on the Martian surface."

Carbon dioxide makes up most of the Martian atmosphere. That gas can be pulled out of the air and sequestered or pulled into the ground by chemical reactions with rocks to form carbonate minerals. Years before the series of successful Mars missions, many scientists expected to find large Martian deposits of carbonates holding much of the carbon from the planet's original atmosphere. Instead, these missions have found low concentrations of carbonate distributed widely, and only a few concentrated deposits. By far the largest known carbonate-rich deposit on Mars covers an area at least the size of Delaware, and maybe as large as Arizona, in a region called Nili Fossae.

Christopher Edwards, a former Caltech researcher now with the U.S. Geological Survey in Flagstaff, Arizona, and Ehlmann reported the findings and analysis in a paper posted online by the journal Geology. Their estimate of how much carbon is locked into the Nili Fossae carbonate deposit uses observations from numerous Mars missions, including the Thermal Emission Spectrometer (TES) on NASA's Mars Global Surveyor orbiter, the mineral-mapping Compact Reconnaissance Imaging Spectrometer for Mars (CRISM) and two telescopic cameras on NASA's Mars Reconnaissance Orbiter, and the Thermal Emission Imaging System (THEMIS) on NASA's Mars Odyssey orbiter.

Edwards and Ehlmann compare their tally of sequestered carbon at Nili Fossae to what would be needed to account for an early Mars atmosphere dense enough to sustain surface waters during the period when flowing rivers left their mark by cutting extensive river-valley networks. By their estimate, it would require more than 35 carbonate deposits the size of the one examined at Nili Fossae. They deem it unlikely that so many large deposits have been overlooked in numerous detailed orbiter surveys of the planet. While deposits from an even earlier time in Mars history could be deeper and better hidden, they don't help solve the thin-atmosphere conundrum at the time the river-cut valleys formed.

The modern Martian atmosphere is too tenuous for liquid water to persist on the surface. A denser atmosphere on ancient Mars could have kept water from immediately evaporating. It could also have allowed parts of the planet to be warm enough to keep liquid water from freezing. But if the atmosphere was once thicker, what happened to it? One possible explanation is that Mars did have a much denser atmosphere during its flowing-rivers period, and then lost most of it to outer space from the top of the atmosphere, rather than by sequestration in minerals.

"Maybe the atmosphere wasn't so thick by the time of valley network formation," Edwards said. "Instead of Mars that was wet and warm, maybe it was cold and wet with an atmosphere that had already thinned. How warm would it need to have been for the valleys to form? Not very. In most locations, you could have had snow and ice instead of rain. You just have to nudge above the freezing point to get water to thaw and flow occasionally, and that doesn't require very much atmosphere."

NASA's Curiosity Mars rover mission has found evidence of ancient top-of-atmosphere loss, based on the modern Mars atmosphere's ratio of heavier carbon to lighter carbon. Uncertainty remains about how much of that loss occurred before the period of valley formation; much may have happened earlier. NASA's MAVEN orbiter, examining the outer atmosphere of Mars since late 2014, may help reduce that uncertainty.

For more information about the Mars Reconnaissance Orbiter mission, visit:

For more information about the Mars Odyssey mission, visit: