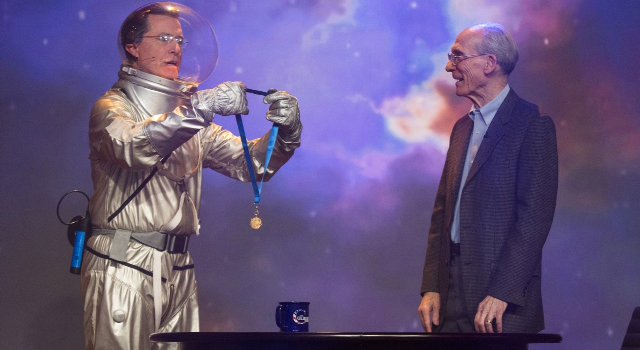 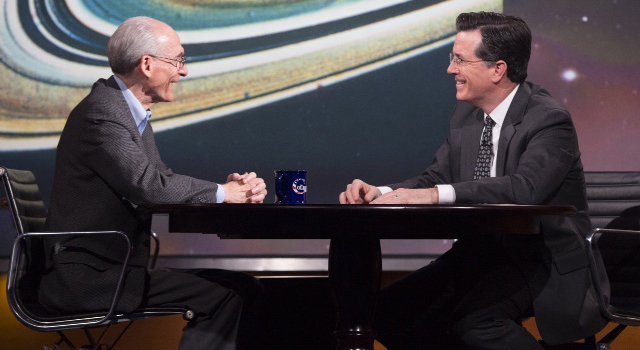 Against the backdrop of an image of Saturn's rings taken by NASA's Voyager mission, project scientist Ed Stone describes the 36-year journey of the two Voyager spacecraft. Stone was a guest on the Colbert Report on Dec. 3, 2013.
Credit: courtesy of K. Long 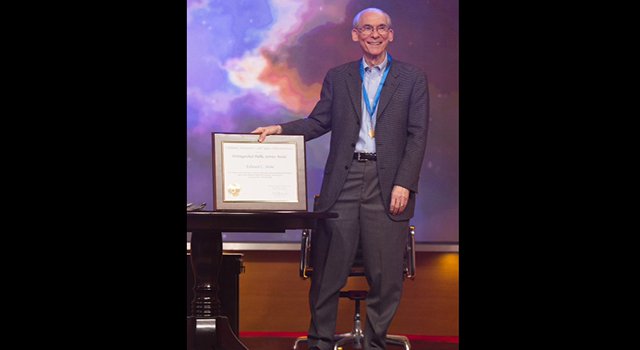 Ed Stone, the project scientist of NASA's Voyager mission, stands with his NASA Distinguished Public Service Medal and accompanying certificate. He received the award on the talk show The Colbert Report on Dec. 3, 2013.
Credit: courtesy of K. Long

Ed Stone, the project scientist for NASA's Voyager mission since 1972, appears on TV with talk show host Stephen Colbert and receives one of NASA's highest honors.

As if NASA's Voyager mission didn't have enough firsts in its 36-year journey, what with sending the first spacecraft to Uranus, Neptune and, most recently, interstellar space! Now, it has another first back here on Earth: on last night's episode of the Colbert Report (12/3/13), host Stephen Colbert floated across the stage in a spacesuit worthy of a1950s-era sci-fi movie and presented Voyager Project Scientist Ed Stone with a NASA Distinguished Public Service Medal. The prestigious award honors Stone for his work as project scientist of the venerable Voyager spacecraft since 1972.

"I was on the Colbert Report to talk about what I think of as humankind's greatest -- and certainly most extensive -- journey of exploration, and I certainly didn't expect the host to hand me an award," said Stone, a professor of physics at the California Institute of Technology and former director of NASA's Jet Propulsion Laboratory, Pasadena, Calif. "That surprise on my face was real."

The NASA Distinguished Public Service Medal is the highest honor for a non-government individual. The citation, put forth by NASA's associate administrator for the Science Mission Directorate, John Grunsfeld, commended Stone "for a lifetime of extraordinary scientific achievement and outstanding leadership of space science missions, and for his exemplary sharing of the exciting results with the public."

Stone grew up in Burlington, Iowa, and attended Burlington Junior College and the University of Chicago. He was inspired to enter the fields of planetary science and space exploration by the launch of Sputnik in 1957, and his career has spanned the space age.

Stone has been a member of the Caltech faculty since 1967. In 1972, he became the Voyager project scientist, and he has the distinction of serving as Voyager's one-and-only project scientist. He has seen the two spacecraft, Voyager 1 and 2, through the planetary encounters of Jupiter, Saturn, Uranus and Neptune and is now eagerly poring through the data coming back from Voyager 1, now exploring interstellar space.

While serving as director of JPL from 1991 to 2001, Stone oversaw numerous NASA projects, such as Galileo's mission around Jupiter, the launch of the Cassini mission to Saturn, a new generation of Earth science satellites and the successful Pathfinder landing on Mars.

Stone's current projects also include serving as vice chair of the board of directors of the Thirty Meter Telescope project, which is preparing to build the most advanced and powerful optical telescope to date.

A clip of last night's show is online at: http://www.colbertnation.com/the-colbert-report-videos/430941/december-03-2013/ed-stone . The clip showing Ed Stone receiving the award is at http://www.colbertnation.com/the-colbert-report-videos/430942/december-03-2013/sign-off---honoring-ed-stone .

A Q&A about Stone and Voyager 1's arrival in interstellar space is online at: http://www.jpl.nasa.gov/interstellarvoyager/q-and-a/

The Voyager spacecraft were built and continue to be operated by NASA's Jet Propulsion Laboratory, in Pasadena, Calif. Caltech manages JPL for NASA. The Voyager missions are a part of NASA's Heliophysics System Observatory, sponsored by the Heliophysics Division of the Science Mission Directorate at NASA Headquarters in Washington. For more information about Voyager, visit: http://www.nasa.gov/voyager and http://voyager.jpl.nasa.gov.