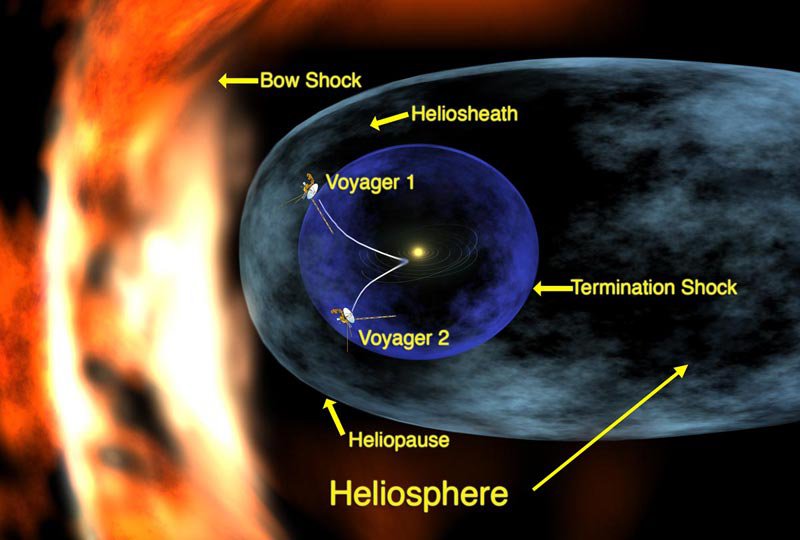 A trio of surprise discoveries from NASA's Voyager 1 spacecraft reveals intriguing new information about our solar system's final frontier. The findings appear in the Sept. 23 issue of Science.

The surprises come as the hardy, long-lived spacecraft approaches the edge of our solar system, called the heliopause, where the sun's influence ends and the solar wind smashes into the thin gas between the stars.

"These are just the most recent of many surprises Voyager has revealed in its 28-year journey of discovery. They tell us that the interaction of our sun with the surrounding interstellar matter from other stars is more dynamic and complex than we had imagined, and that there is more yet to be learned as Voyager begins the final leg of its race to the edge of interstellar space," said Dr. Edward Stone, Voyager project scientist at the California Institute of Technology in Pasadena. Voyager 1 is expected to pass beyond the heliopause into interstellar space in eight to 10 years, with Voyager 2 expected to follow about five years later.

Voyager 1 has already passed the termination shock, where the million-mile-per-hour solar wind abruptly slows and becomes denser and hotter as it presses against interstellar gas. It was expected the wind beyond the shock would slow to a few hundred thousand miles per hour. But the Voyager scientists were surprised to find that the speed was much less, and at times the wind appeared to be flowing back inward toward the sun.

"This could mean that the outward pressure of wind was decreasing as the sun entered the less active phase of its 11-year cycle of sunspot activity," said Stone.

Another surprise: the direction of the interplanetary magnetic field in the outer solar system varied more slowly beyond the termination shock. As the sun rotates every 26 days, the direction of the field alternates every 13 days. That field is carried out by the solar wind, with the alternating directions forming a pattern of zebra stripes moving outward past the spacecraft. One could imagine a zebra with giant "magnetic stripes" running past the spacecraft and Voyager 1 "observing" an alternating stripe every 13 days. After the shock, the "zebra" with its stripe pattern was moving at nearly the same speed as Voyager, so that it took more than 100 days for the stripe to pass the spacecraft and for the magnetic field to switch directions.

Perhaps the most puzzling surprise is what Voyager 1 did not find at the shock. It had been predicted that interstellar ions would bounce back and forth across the shock, slowly gaining energy with each bounce to become high speed cosmic rays. Because of this, scientists expected those cosmic ray ions would become most intense at the shock. However, the intensity did not reach a maximum at the shock, but has been steadily increasing as Voyager 1 has been moving farther beyond the shock. This means that the source of those cosmic rays is in a region of the outer solar system yet to be discovered.

More information and visuals about Voyager are available online at http://voyager.jpl.nasa.gov/ and http://www.nasa.gov/vision/universe/solarsystem/voyager_agu.html .

Still operating in remote, cold and dark conditions billions of miles from the sun, the Voyager 1 and 2 spacecraft owe their longevity to radioisotope thermoelectric generators which produce electricity from the heat generated by the natural decay of plutonium.