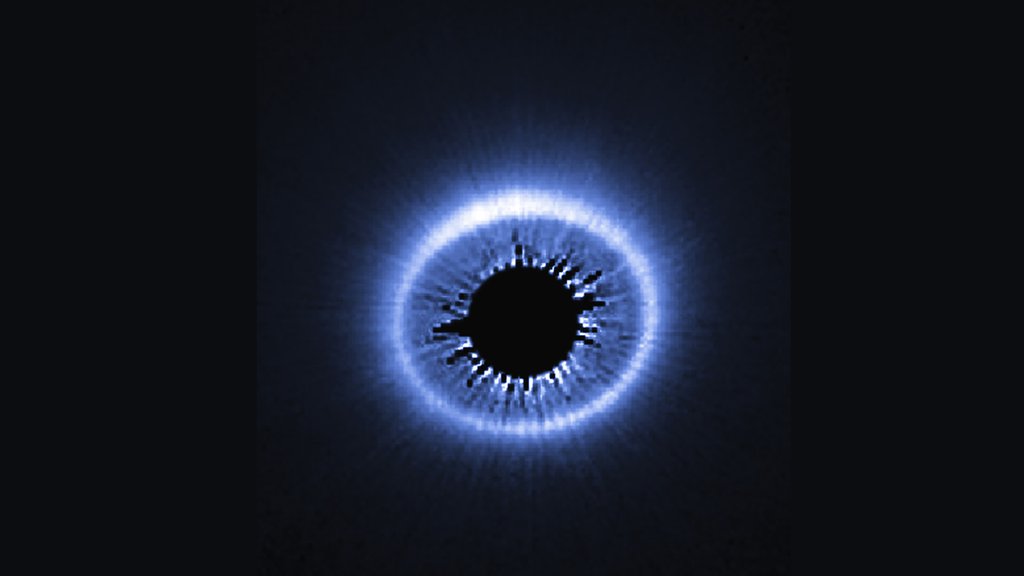 The marked asymmetry of the debris disk around the star HD 181327 suggests it may have formed as a result of the collision of two small bodies. The Disk Detective project aims to discover many other stellar disks using volunteer classifications of data from NASA's WISE mission.
Credit: NASA/ESA/Univ. of Arizona/HST/GO 12228 Team

"This is absolutely mind-boggling," said Marc Kuchner, an astrophysicist at NASA's Goddard Space Flight Center in Greenbelt, Maryland, and the project's principal investigator. "We've already broken new ground with the data, and we are hugely grateful to everyone who has contributed to Disk Detective so far."

Combing through objects identified by WISE during its infrared survey of the entire sky, Disk Detective aims to find two types of developing planetary environments. The first, known as a YSO disk, typically is less than 5 million years old, contains large quantities of gas, and often is found in or near young star clusters. The second planetary habitat, known as a debris disk, tends to be older than 5 million years, holds little or no gas, and possesses belts of rocky or icy debris that resemble the asteroid and Kuiper belts found in our own solar system. Vega and Fomalhaut, two of the brightest stars in the sky, host debris disks.

Planets form and grow within disks of gas, dust and icy grains surrounding young stars. The particles absorb the star's light and reradiate it as heat, which makes the stars brighter at infrared wavelengths -- in this case, 22 microns -- than they would be without a disk.

Computer searches already have identified some objects seen by the WISE survey as potential dust-rich disks. But software can't distinguish them from other infrared-bright sources, such as galaxies, interstellar dust clouds and asteroids. There may be thousands of potential planetary systems in the WISE data, but the only way to know for sure is to inspect each source by eye.

Kuchner recognized that searching the WISE database for dusty disks was a perfect opportunity for crowdsourcing. He worked with NASA to team up with the Zooniverse, a collaboration of scientists, software developers and educators who collectively develop and manage citizen science projects on the Internet.

At DiskDetective.org, volunteers watch a 10-second "flip book" of a disk candidate shown at several different wavelengths as observed from three different telescopes, including WISE. They then click one or more buttons that best describe the object's appearance. Each classification helps astronomers decide which images may be contaminated by background galaxies, interstellar matter or image artifacts, and which may be real disks that should be studied in more detail.

In March 2014, just two months after Disk Detective launched, Kuchner was amazed to find just how invested in the project some users had become. Volunteers complained about seeing the same object over and over. "We thought at first it was a bug in the system," Kuchner explained, "but it turned out they were seeing repeats because they had already classified every single object that was online at the time."

Some 28,000 visitors around the world have participated in the project to date. What's more, volunteers have translated the site into eight foreign languages, including Romanian, Mandarin and Bahasa, and have produced their own video tutorials on using it.

Many of the project's most active volunteers are now joining in science team discussions, and the researchers encourage all users who have performed more than 300 classifications to contact them and take part.

One of these volunteers is Tadeáš Cernohous, a postgraduate student in geodesy and cartography at Brno University of Technology in the Czech Republic. "I barely understood what scientists were looking for when I started participating in Disk Detective, but over the past year I have developed a basic sense of which stars are worthy of further exploration," he said.

Alissa Bans, a postdoctoral fellow at Adler Planetarium in Chicago and a member of the Disk Detective science team, recalls mentioning that she was searching for candidate YSOs and presented examples of what they might look like on Disk Detective. "In less than 24 hours," she said, "Tadeáš had compiled a list of nearly 100 objects he thought could be YSOs, and he even included notes on each one."

Speaking at a press conference at the American Astronomical Society meeting in Seattle on Tuesday, Kuchner said the project has so far netted 478 objects of interest, which the team is investigating with a variety of ground-based telescopes in Arizona, California, New Mexico, Argentina and Chile. "We now have at least 37 solid new disk candidates, and we haven't even looked at all the new telescope data yet," he said.

Disk Detective currently includes about 278,000 WISE sources. The team expects to wrap up the current project sometime in 2018, with a total of about 3 million classifications and perhaps 1,000 disk candidates. The researchers then plan to add an additional 140,000 targets to the site.

"We've come a long way, but there's still lots and lots more work to do -- so please drop by the site and do a little science with us!" added Kuchner.

WISE has made infrared measurements of more than 745 million objects, compiling the most comprehensive survey of the sky at mid-infrared wavelengths currently available. With its primary mission complete, the satellite was placed in hibernation in 2011. WISE was awoken in September 2013, renamed the Near-Earth Object Wide-field Infrared Survey Explorer (NEOWISE), and given a new mission to assist NASA's efforts in identifying the population of potentially hazardous near-Earth objects (NEOs).

NASA is exploring our solar system and beyond to understand the universe and our place in it. We seek to unravel the secrets of our universe, its origins and evolution, and search for life among the stars. Today's announcement shares the discovery of our ever-changing cosmos, and brings us closer to learning whether we are alone in the universe.