Volcanic Rock in Mars' Gusev Crater Hints at Past Water 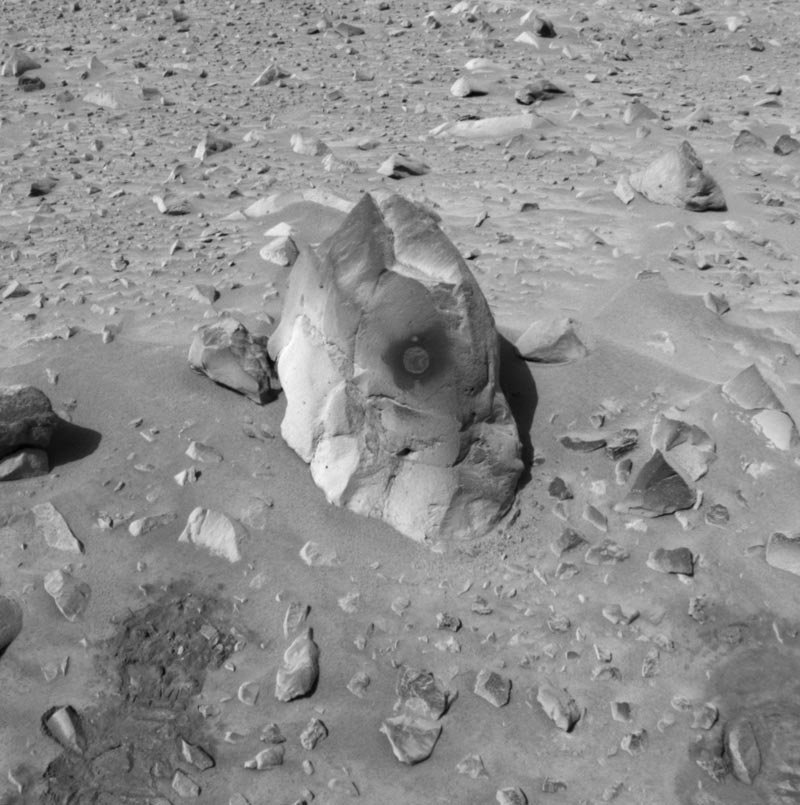 hole in Humphrey made by Spirit

NASA's Spirit has found hints of a water history in a rock at Mars' Gusev Crater, but it is a very different type of rock than those in which NASA's Opportunity found clues to a wet past on the opposite side of the planet.

NASA's Spirit has found hints of a water history in a rock at Mars' Gusev Crater, but it is a very different type of rock than those in which NASA's Opportunity found clues to a wet past on the opposite side of the planet.

"If we found this rock on Earth, we would say it is a volcanic rock that had a little fluid moving through it," Arvidson said. If this interpretation is correct, the fluid -- water with minerals dissolved in it -- may have been carried in the original magma that formed the rock or may have interacted with the rock later, he said.

The clues appear in an interior exposure of "Humphrey" where Spirit's rock abrasion tool scraped away the rock's surface to a depth of 2 millimeters (.08 inch). To gain more confidence that the bright material seen in cracks and pores is not dust that has intruded from the surface over the millenia, scientists intend to have Spirit grind more deeply into another dark rock, not yet selected. The bright material is not debris from the grinding process, said Stephen Gorevan of Honeybee Robotics, New York, lead scientist for the abrasion tool.

The amount of water suggested by the possible crystals in "Humphrey" is far less than what is indicated by the minerals and structures that Opportunity has revealed in rocks at Meridiani. Rover scientists announced the Opportunity findings earlier this week. "Mars is a diverse planet," Arvidson said today.

Spirit is headed toward a crater nicknamed "Bonneville," about 150 meters (500 feet) in diameter, where scientists hope to see rocks from beneath the region's surface volcanic layer. Those rocks may tell yet a different story from an earlier era of Gusev Crater's past.

At Meridiani Planum, Opportunity has finished taking a set of 114 microscope images of a rock called "Last Chance" to examine details of the rock's layering structure. The sequence required more than 400 commands and more than 200 positions of Opportunity's robotic arm, said Opportunity Mission Manager Matt Wallace of JPL. "Our activities are getting increasingly complex," he noted.

Spirit completed its 60th martian day, or sol, at Gusev late Thursday. Opportunity completed its 40th sol at Meridiani at 9:32 a.m. Friday, PST. "Between the two rovers, we've had a terrific 100 days on Mars. This last week has been particularly exciting," Wallace said.

A new color view, combining several frames from Opportunity's panoramic camera, adds information about the rover's likely destination after finishing work in and around the small crater where it landed. From partway up the inner slope of that 22-meter-diameter (72-foot-diameter) crater, the rover has an improved view of a crater nicknamed "Endurance," about 10 times as big and about 700 meters (2,300 feet) to the east. "We can see features in the rim, maybe streaks, maybe layers," said Dr. Jim Bell of Cornell University, Ithaca, N.Y., lead scientist for both rovers’ panoramic cameras.

The same new view across the flat plain of Meridiani also shows Opportunity’s jettisoned heat shield, a trail of marks left by the airbag bounces and a solitary dark rock about 40 centimeters (16 inches) across. Bell said, "Not only did we get incredibly lucky to get this hole-in-one in the crater, but on the way into the crater we hit with the airbags the only rock around."

Both rovers carry magnets supplied by Denmark for experiments to analyze martian dust. Dust covers much of Mars' surface and hangs in the atmosphere, occasionally rising into giant dust storms. One of the magnets is designed to exclude any magnetic dust particles from landing in the center of a target area. During Spirit's time on Mars, dust has accumulated on other parts of the target while the center has remained "probably the cleanest area anywhere on the surface of the rover," said Dr. Morten Madsen, science team member from the Center for Planetary Science, Copenhagen, Denmark.

"Most, if not all of the dust particles in the martian atmosphere are magnetic," Madsen said. Another of the magnets is within reach of the rover's robotic arm. Examination of dust on the target by instruments on the end of the arm will soon yield further information about the composition of the dust, he said.