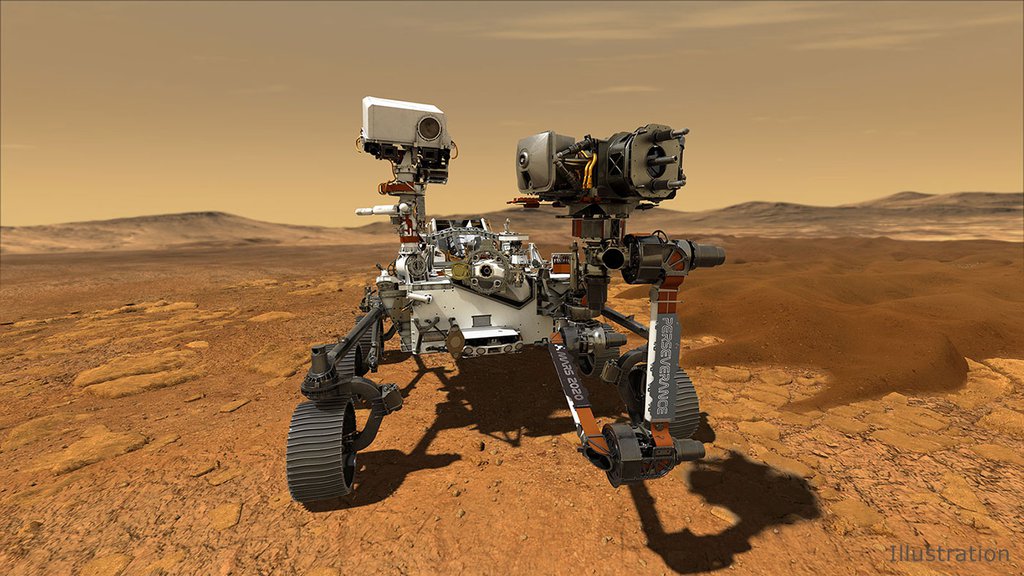 This illustration depicts NASA's Perseverance rover operating on the surface of Mars. Perseverance will land at the Red Planet's Jezero Crater a little after 3:40 p.m. EST (12:40 p.m. PST) on Feb. 18, 2021.Full image and caption
Credit: NASA/JPL-Caltech

NASA chose seventh-grader from Virginia as winner of the agency's "Name the Rover" essay contest. Alexander Mather's entry for "Perseverance" was voted tops among 28,000 entries.

NASA's next Mars rover has a new name - Perseverance.

The name was announced Thursday by Thomas Zurbuchen, associate administrator of the Science Mission Directorate, during a celebration at Lake Braddock Secondary School in Burke, Virginia. Zurbuchen was at the school to congratulate seventh grader Alexander Mather, who submitted the winning entry to the agency's "Name the Rover" essay contest, which received 28,000 entries fromK-12 students from every U.S. state and territory.

NASA has chosen a name for its next Mars rover: Perseverance. The name was announced March 5, 2020, by Thomas Zurbuchen, associate administrator of the Science Mission Directorate at NASA Headquarters in Washington during a celebration at Lake Braddock Secondary School in Burke, Virginia. Zurbuchen was on hand at the school to congratulate Alexander Mather, who submitted the winning entry to the agency's "Name the Rover" essay contest, which received 28,000 entrants from K-12 students from every U.S. state and territory.

"Alex's entry captured the spirit of exploration," said Zurbuchen. "Like every exploration mission before, our rover is going to face challenges, and it's going to make amazing discoveries. It's already surmounted many obstacles to get us to the point where we are today - processing for launch. Alex and his classmates are the Artemis Generation, and they're going to be taking the next steps into space that lead to Mars. That inspiring work will always require perseverance. We can't wait to see that nameplate on Mars."

Perseverance is the latest in a long line of Red Planet rovers to be named by school-age children, from Sojourner in 1997 to the Spirit and Opportunity rovers, which landed on Mars in 2004, to Curiosity, which has been exploring Mars since 2012. In each case, the name was selected following a nationwide contest.

The contest that resulted in Alex's winning entry of Perseverance began Aug. 28, 2019. Nearly 4,700 volunteer judges - educators, professionals and space enthusiasts from around the country - reviewed submissions to help narrow the pool down to 155 semifinalists. Once that group was whittled down to nine finalists, the public had five days to weigh in on their favorites, logging more than 770,000 votes online, with the results submitted to NASA for consideration. The nine finalists also talked with a panel of experts, including Lori Glaze, director of NASA's Planetary Science Division; NASA astronaut Jessica Watkins; rover driver Nick Wiltsie at NASA's Jet Propulsion Laboratory in California; and Clara Ma, who, as a sixth-grade student in 2009, named Curiosity.

This image of the nameplate secured to the arm of NASA's Mars Perseverance rover was taken at a payload servicing facility at Kennedy Space Center soon after being attached on March 4, 2020. The laser-etched plate serves as a rock and debris shield that will protect a flexible electrical cable.
Credit: NASA/JPL-Caltech
Full image and caption

Up until two years ago, Mather was more interested in video games than space. That all changed in the summer of 2018, when he visited Space Camp in Alabama. From his first glimpse of a Saturn V - the rocket that launched the Apollo astronauts to the Moon half a century ago - Mather became a bona fide space enthusiast, checking NASA.gov daily, consuming astronaut autobiographies and even 3D-printing flyable model rockets. When the call went out for students to propose a name for NASA's new Mars rover, Mather knew he wanted to contribute.

"This was a chance to help the agency that put humans on the Moon and will soon do it again," said Mather. "This Mars rover will help pave the way for human presence there, and I wanted to try and help in any way I could. Refusal of the challenge was not an option."

NASA's next Mars rover has a new name: Perseverance. After sorting through more than 28,000 submissions from K-12 students from every U.S. state and territory, one name was chosen. Alexander Mather, a 13-year-old student from Virginia who submitted the winning name, explains why he chose Perseverance as the name of NASA's next robotic scientist to visit the Red Planet.

Along with forever being associated with the mission, Mather will also receive an invitation to travel with his family to Cape Canaveral Air Force Station in Florida to witness the rover begin its journey when it launches this summer. While Mather has received NASA's grand prize in this competition, NASA also is acknowledging the valuable contributions of the semifinalists whose entries were among the top ones considered.

Lori Glaze, director of NASA's Planetary Science Division, looks on as Thomas Zurbuchen, associate administrator of NASA's Science Mission Directorate, congratulates Alexander Mather on March 5, 2020, during a celebration at Lake Braddock Secondary School in Burke, Virginia. The seventh grader had the honor of naming the agency's next Mars rover after submitting the winning entry to the agency's "Name the Rover" essay contest, which received 28,000 entrants from K-12 students from every U.S. state and territory.
Credit: NASA
Full image and caption

"They came so far, and their expressive submissions helped make this naming contest the biggest and best in NASA history," said Glaze, who also attended the event Thursday. "So, we decided to send them a little farther - 314 million miles farther. All 155 semifinalists' proposed rover names and essays have been stenciled onto a silicon chip with lines of text smaller than one-thousandth the width of a human hair and will be flown to Mars aboard the rover."

NASA's Perseverance rover is a robotic scientist weighing just under 2,300 pounds (1,043 kilograms). Managed for the agency by JPL, the rover's astrobiology mission includes searching for signs of past microbial life. It also will characterize the planet's climate and geology, and collect samples of Martian rocks and dust for a future Mars Sample Return mission to Earth while paving the way for human exploration of the Red Planet.

"When word went out during the naming event here at JPL, I took a moment to look around the auditorium," said John McNamee, project manager of the Mars 2020 Perseverance rover mission at JPL. "I saw all these dedicated men and women who for years have invested the full measure of their intellect and stamina into the most technologically advanced rover mission in history - and I saw a lot of smiling faces and high-fives. Perseverance? You bet, that is a worthy name that we can be proud of as the first leg of a sample return campaign."

Sending a rover to the Red Planet is more than just 3...2...1... Liftoff! ?? It takes 100s of people and years of hard work to get a spacecraft from Earth to Mars. So when NASA's Perseverance rover touches down on the Martian surface, it will be because of the talented NASA minds that helped to make it happen.

The rover naming contest partnership was part of a Space Act Agreement in educational and public outreach efforts between NASA, Battelle of Columbus, Ohio, and Future Engineers of Burbank, California. Amazon Web Services is an additional prize provider for the Mars 2020 naming contest and will provide Alex and his family a trip to see the launch.

Mars 2020 is part of a larger program that includes missions to the Moon as a way to prepare for human exploration of the Red Planet. Charged with landing the first woman and the next man on the Moon by 2024, NASA will establish a sustained human presence on and around the Moon by 2028 through NASA's Artemis program.

Follow the Perseverance Mars rover's official accounts and get answers to your questions about the mission at: