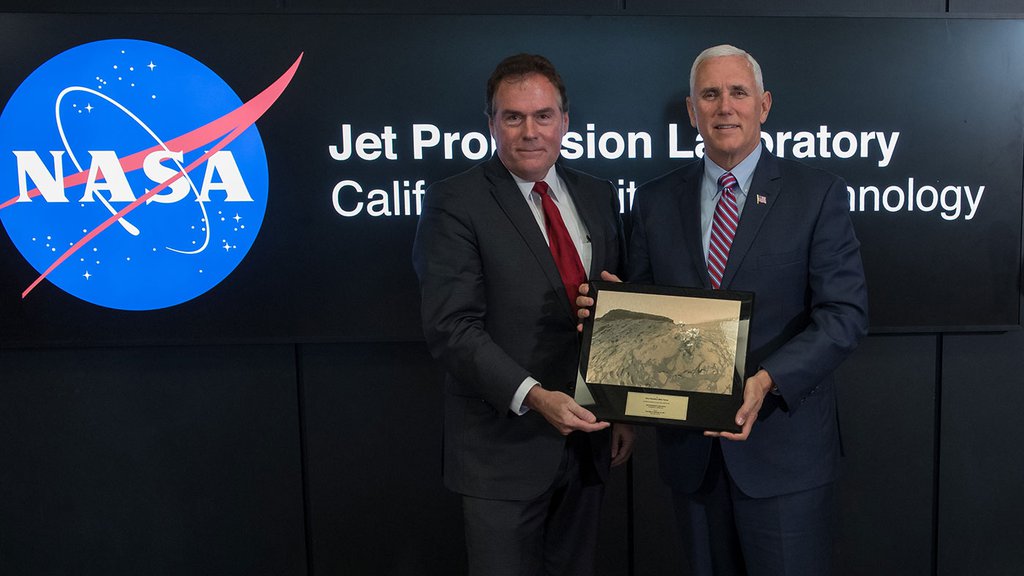 A week before NASA's next Mars launch, Vice President Mike Pence toured the birthplace of the InSight Mars Lander and numerous other past, present and future space missions.

A week before NASA launches its next mission to Mars, Vice President Mike Pence toured on Saturday, April 28, the birthplace of numerous past, present and future space missions at the agency's Jet Propulsion Laboratory in Pasadena, California.

The afternoon visit by the Vice President, his wife, Karen, and daughter Charlotte, included a stop in JPL's Mission Control, where engineers will communicate with NASA's Interior Exploration using Seismic Investigations, Geodesy and Heat Transport (InSight). The Mars lander is scheduled to launch Saturday, May 5, from Vandenberg Air Force Base in California. InSight will be the first interplanetary mission ever to launch from the West Coast, and is the first-ever mission to study the interior of Mars.

The Mission Control building, a National Historic Landmark, has served as a hub for communications with countless spacecraft since 1964, including some of NASA's Apollo Moon missions, the twin Voyager spacecraft at the edge of our solar system, and the Cassini mission to Saturn. From here, Charlotte Pence had an opportunity to send commands giving the Mars Curiosity rover a day's worth of science activities. The signal took about seven minutes to travel the 80 million miles to reach Curiosity, which has been roaming the Red Planet for almost six years.

"We were honored to show the Vice President, who has a strong commitment to space exploration, some of our special sites and space missions," said JPL Director Michael Watkins. "With JPL's rich history, which includes designing and building America's first satellite for launch in 1958, and with our cutting-edge scientific capabilities, we stand ready to advance exploration as we move forward into our revitalized space age."

The tour included a stop at the JPL Mars Yard, an outdoor test facility that simulates the Martian landscape. There, the Pence family tried their hands at maneuvering a test Mars rover. They also visited the Spacecraft Assembly Facility, where the Mars 2020 mission hardware is being assembled. Mars 2020 will search for signs of habitability in Mars' ancient past and signs of past microbial life.

Video and still images of the visit are available at: