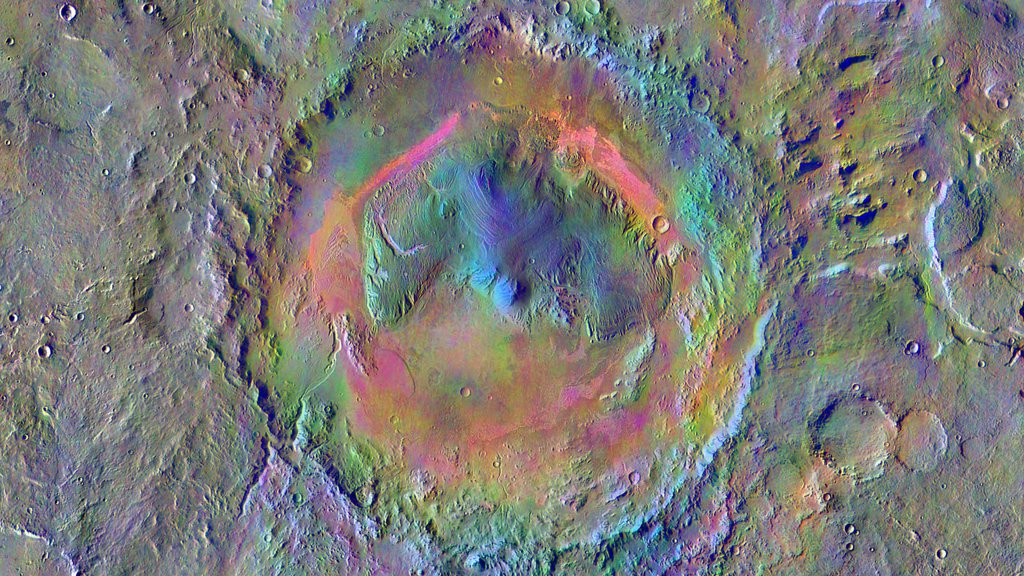 Gale Crater, home to NASA's Curiosity Mars rover, shows a new face in this image made using data from the THEMIS camera on NASA's Mars Odyssey orbiter. The colors come from an image processing method that identifies mineral differences in surface materials and displays them in false colors.› Full image and caption
Credit: NASA/JPL-Caltech/Arizona State University 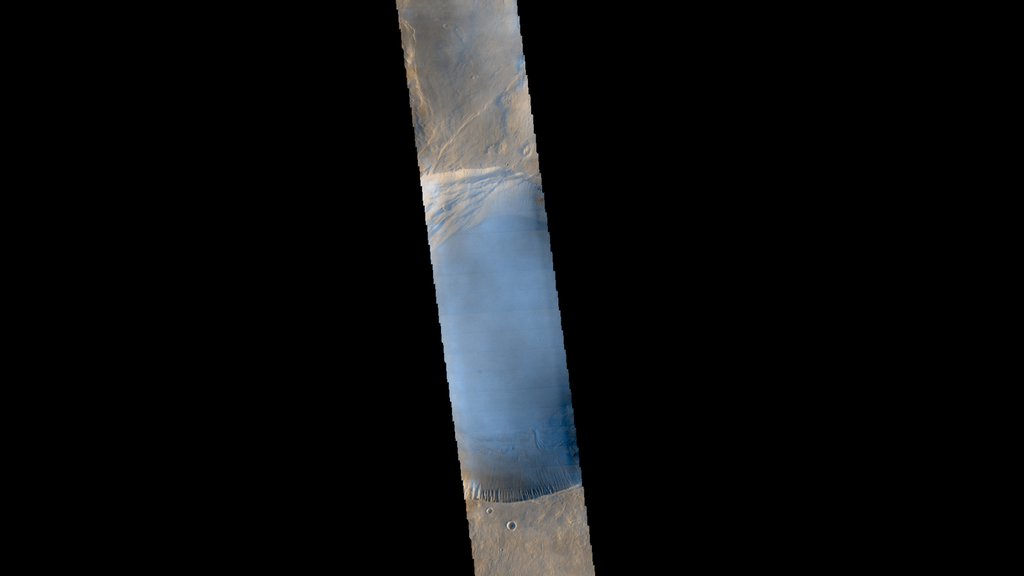 Named after the bestselling novel "2001: A Space Odyssey" by Arthur C. Clarke, Odyssey began orbiting Mars almost 14 years ago, on Oct. 23, 2001. On Dec. 15, 2010, it became the longest-operating spacecraft ever sent to Mars, and continues to hold that record today.

Odyssey, which discovered widespread water ice just beneath the surface of the Red Planet, is still going strong today, serving as a key communications relay for NASA's Mars rovers and making continued contributions to planetary science.

"This orbital milestone is an opportunity to celebrate Odyssey's many achievements," said Jim Green, NASA's director of Planetary Science. "Odyssey will continue to help lay a foundation for the first humans to Mars in the 2030s through NASA's Journey to Mars initiative."

Odyssey's major discoveries began in the early months of its two-year primary mission, with gamma-ray and neutron measurements that indicated plentiful water ice just beneath the surface at high latitudes on Mars. The spacecraft's unexpectedly long service has enabled achievements such as completion of the highest-resolution global map of Mars and observation of seasonal and year-to-year changes, such as freezing and thawing of carbon dioxide.

Through its many accomplishments, the spacecraft also has aided NASA's preparations for human missions to Mars by monitoring radiation in the environment around the planet via the Mars Radiation Environment Experiment, developed at NASA's Johnson Space Center in Houston.

Odyssey currently is completing an adjustment to an orbit that will position it to pass over Martian terrain lit by early-morning sunlight rather than afternoon light. In its current orbit, the spacecraft always flies near each pole and along what is called the terminator. The terminator is a "line" encircling Mars that passes through any point on the planet's surface at sunrise and again at sunset, separating the portion of Mars lit by the sun from the portion experiencing darkness, dividing day and night. The position of this line varies by time of day and time of year.

"Upcoming observations will focus on what is happening in the Martian atmosphere in the morning, such as clouds, hazes and fogs, and on frosts on the surface that burn off by later in the day," said Jeffrey Plaut, Odyssey project scientist at JPL.

The planned drift to a morning-daylight orbit began in 2012, was accelerated in 2014, and will be completed with a maneuver in November to lock in the orbit timing so that each pass over the equator occurs at the same time of day.

"We have performed many orbit maneuvers over the long life of this mission, and we will use that experience conducting the one to halt the drift," said Steve Sanders, Odyssey spacecraft engineer at Lockheed Martin Space Systems in Denver.

To date, Odyssey's Thermal Emission Imaging System (THEMIS) has yielded 208,240 images in visible-light wavelengths and 188,760 in thermal infrared wavelengths. THEMIS images are the basis for detailed global maps and identification of some surface materials, such as chloride salt deposits and silica-rich terrain. The infrared imaging also indicates how quickly regions of the surface cool at night or warm in sunlight, telling researchers how dusty or rocky the ground is.

Odyssey's three-instrument Gamma Ray Spectrometer (GRS) suite detected significant amount of hydrogen on the planet -- interpreted as water ice hidden beneath the surface. This discovery prompted NASA to send its Phoenix Mars Lander to an arctic plain on Mars in 2008, where it examined the water ice detected by Odyssey. The spectrometer suite also mapped global distribution of key chemical elements, such as iron and potassium. The University of Arizona, Tucson, headed its development. Two GRS instruments are still active: the high-energy neutron detector from the Russian Space Research Institute and the neutron spectrometer from Los Alamos National Laboratories in New Mexico.

As a communications relay for NASA's Mars rovers, Odyssey has transmitted to Earth more than 90 percent of the data received from the Opportunity rover. Future plans for Odyssey include relay duty for NASA and European Space Agency landers arriving on Mars in 2016.