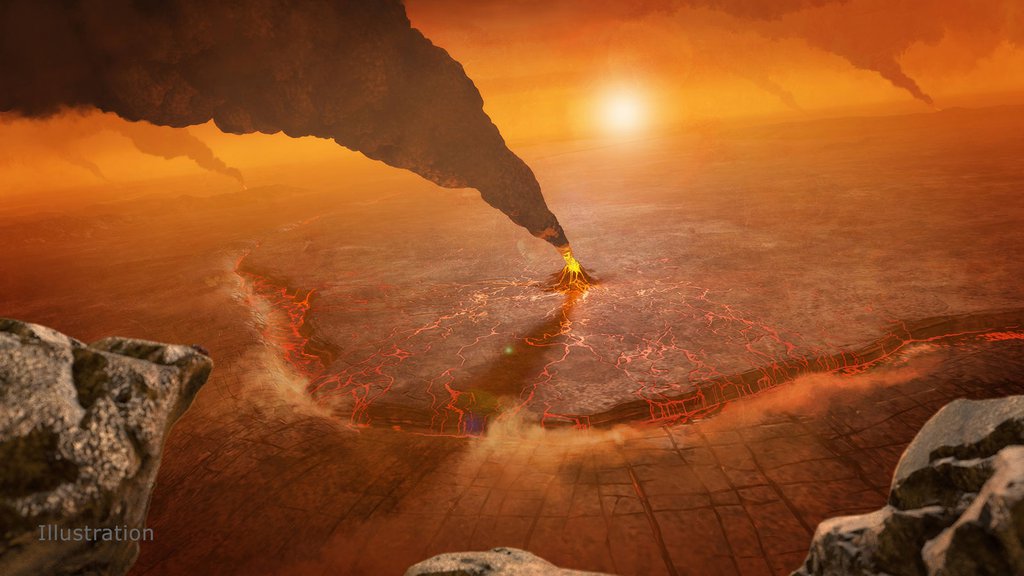 An artist's concept of active volcanos on Venus, depicting a subduction zone where the foreground crust plunges into the planet's interior at the topographic trench.
Credit: NASA/JPL-Caltech/Peter Rubin 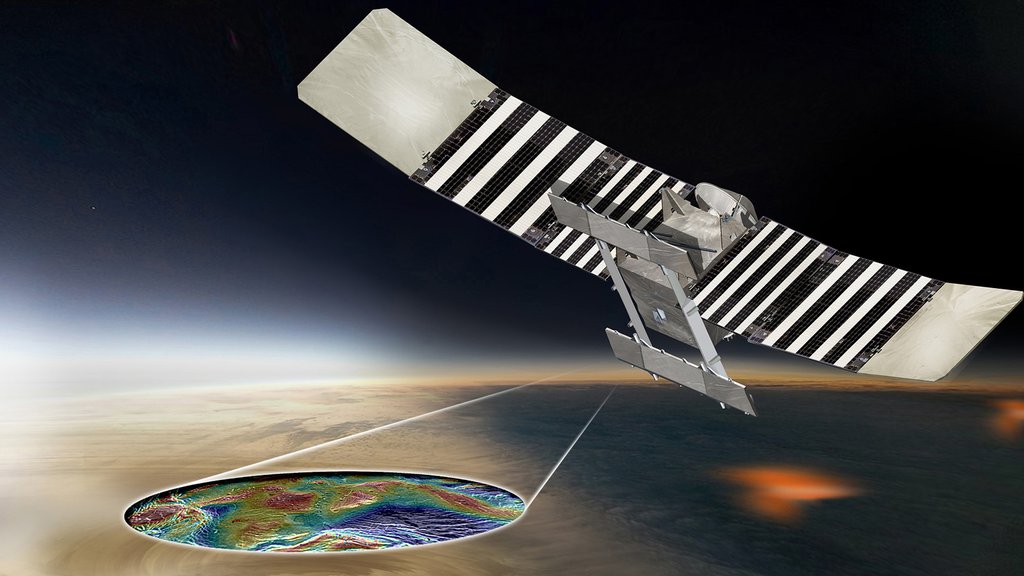 Updated June 2, 2021: Following a competitive, peer-review process, VERITAS was selected with DAVINCI+ to be the next NASA missions to Venus. Chosen based on their potential scientific value and the feasibility, the project teams will now work to finalize their requirements, designs, and development plans. Learn more about VERITAS with this 2020 feature.

Under consideration to become the next Discovery Program mission, VERITAS would reveal the inner workings of Earth's mysterious "twin."

Imagine Earth. Now fill the skies with thick, Sun-obscuring clouds of sulfuric acid; boil off the oceans by cranking up the temperature to 900 degrees Fahrenheit (nearly 500 degrees Celsius), and boost the air pressure high enough to flatten you like a pancake. What you now have is Venus, a rocky planet similar in size to Earth but different in almost every other way.

How these "sister planets" evolved so differently has been a burning scientific question for decades, and a proposed mission called VERITAS seeks to provide answers by transforming our understanding of the internal geodynamics that shaped the planet. The mission could lend insights into our own planet's evolution and even help us better understand rocky planets orbiting other stars.

Short for Venus Emissivity, Radio Science, InSAR, Topography & Spectroscopy, VERITAS is being considered for selection under NASA's Discovery Program and would be managed by NASA's Jet Propulsion Laboratory in Southern California. The project's partners include Lockheed Martin, the Italian Space Agency, the German Space Agency, and the French Space Agency.

"Venus is like this cosmic gift of an accident," said Suzanne Smrekar, principal investigator of VERITAS at JPL. "You have these two planetary bodies - Earth and Venus - that started out nearly the same but have gone down two completely different evolutionary paths, but we don't know why."

The last mission to study the planet's surface, NASA's Magellan spacecraft, ended in 1994. While it provided tantalizing clues about Venus' geology, the instrumentation couldn't provide certitude as to the origin of many of the planet's surface features.

Proposed for a 2026 launch, VERITAS would orbit the planet and peer through the obscuring clouds with a powerful state-of-the art radar system to create 3D global maps and a near-infrared spectrometer to figure out what the surface is made of. It would also measure the planet's gravitational field to determine the structure of Venus' interior. Together, the instruments would offer clues about the planet's past and present geologic processes, from its core to its surface.

A Window Into Early Earth

Here on Earth, the rigid crust that envelops the planet is broken into a jigsaw puzzle of tectonic plates atop the mantle. Convection in the mantle helps drive motion of the surface plates. As some plates descend into the interior - a process known as subduction - they melt, and volcanic outgassing releases volatiles (such as water, nitrogen, carbon dioxide, and methane) into the atmosphere.

Learning more about the geologic processes on Venus - where the warm crust is a good analogy for early Earth's, when the plates were just beginning to form - could offer a valuable glimpse into how these processes began on Earth.

"The biggest mystery to me is the extent of deformation structures on Venus" - areas of rock on the surface that have buckled under immense geologic pressure - "that could be studied to understand the nature of tectonic activity on the planet," said science team member Joann Stock, a professor of geology and geophysics at Caltech's Seismological Laboratory in Pasadena.

Producing high-resolution 3D topographic maps VERITAS would bring into focus structures that have previously been too small to resolve, added Stock. These structures could include raised topography on both sides of strike-slip faults, like the San Andreas Fault, which is an indicator of major tectonic activity. VERITAS would also look for active surface faulting using something called interferometric deformation maps for the first time beyond Earth.

In addition, VERITAS would study vast deformation structures called tessera. These plateau-like features may be analogous to Earth's continents. A leading theory is that Earth's continents formed when iron-rich oceanic crust subducted and melted in the presence of water, producing huge volumes of new, less iron-rich continental crust that rose above the ocean.

To determine if Venus' tessera plateaus formed in a similar way to Earth's continents, VERITAS would construct the first global multispectral maps of Venus' surface composition. If their composition resembles that of continental crust, we'd also gain information about Venus' wetter past.

On Earth, plate tectonics and volcanism go hand in hand. But what about on Venus?

"Determining whether Venus is actively undergoing volcanic activity and understanding what process is driving it is one of the really exciting questions I'd love to see answered," said planetary scientist Jennifer Whitten, a VERITAS science team member at Tulane University in New Orleans.

Using its spectrometer, VERITAS would determine which rocks recently formed from erupting magma, before interactions with the atmosphere have had time to change their chemical composition. In addition, the spectrometer would search for hotspots from active eruptions, while the radar instrument would search for active faulting, an indication of tectonic activity.

In getting to know Venus' volcanoes and the geophysical processes causing them, scientists could also gauge their impact on the planet's climate and, perhaps, answer another key question: Does the planet's interior still contain large quantities of water like Earth's does?

Plate tectonics and volcanism don't just affect how a planet takes shape; they are intimately tied to a planet's habitability. Plate tectonics strongly affects Earth's long-term climate by influencing the processes that keep the atmosphere in balance: volcanism, which release volatiles into the atmosphere, and subduction, which recycles volatiles back into the interior. Also, the formation and erosion of Earth's continents have a major influence on the composition of the oceans and atmosphere. Together, these processes provide the nutrients and a habitable climate for life to thrive.

But what is the delicate geodynamic balance that ultimately makes a planet habitable? Considering the discovery of thousands of exoplanets orbiting stars other than our Sun, the answer could inform our understanding of their nature.

"To unwrap the mysteries of Venus we have to look under the hood at Venus' interior; it is the engine for global geologic and atmospheric evolution," said Smrekar. "Are Venus and Earth fundamentally unique worlds? Or are the differences between these 'twins' only cosmetic? Answering this question is key to understanding what makes other rocky planets habitable and, ultimately, emerge with life."