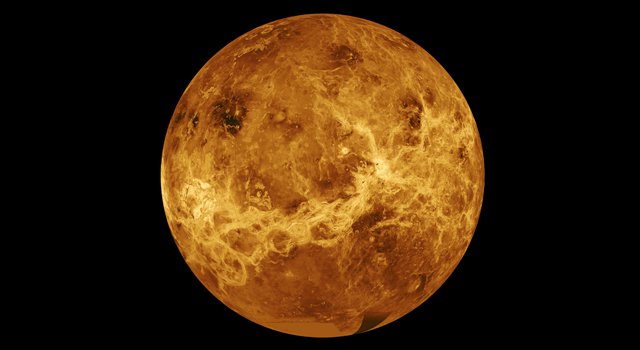 The surface air pressure on the planet Venus may be 75 or 100 times that on Earth--or four to five times greater than the Venus pressure reported recently by Soviet scientists--Jet Propulsion Laboratory researchers have revealed.

PASADENA, Calif. -- The surface air pressure on the planet Venus may be 75 or 100 times that on Earth--or four to five times greater than the Venus pressure reported recently by Soviet scientists--Jet Propulsion Laboratory researchers have revealed.

Dr. Arvydas J. Kliore and Dan L. Cain concluded in an article for the Journal of Atmospheric Sciences that the Russian Venera IV spacecraft either landed on a 15-mile-high Venusian peak undetected by ground radar or stopped transmitting before it reached the planet's solid surface.

Venera IV and the American spacecraft, Mariner V, arrived at Venus one day apart last year after four-month flights from Earth. The Russians reported a parachute landing on the planet on October 18, 1967, 24 hours before Mariner V completed its fly-by mission by crossing the Venus orbit at an altitude of 2540 miles.

The Soviet observations indicated a range of pressures at Venus' surface from 17 to 20 times that on Earth's surface and a maximum temperature of 520 degrees Fahrenheit.

Dr. Kliore was principal investigator and Cain a co- investigator for the S-Band Occultation Experiment, one of seven science experiments conducted by the National Aeronautics and Space Administration's Mariner V spacecraft.

Precise radio tracking of Mariner V, the authors said, enabled calculation of the position of the spacecraft's radio beam, relative to the center of Venus, with an uncertainty of about 200 yards at the point of closest approach.

The resulting Mariner profiles of temperature and pressure, when superimposed with the data of the Russian Venera IV, indicate that the Soviet probe penetrated to a radial distance of about 3774 miles from the center of Venus. The Russians have taken this point to be the surface of the planet.

The distance, however, is at variance with recent Earth-based planetary radar studies. Analyses of data from four powerful radar instruments in the United States and Puerto Rico yielded a Venus radius of 3759 miles.

If the radar data is accurate, Venera IV made its final measurements at an altitude of about 15 miles and reported conditions far less extreme than those actually existing on the surface.

Using the radar-determined radius as the solid surface of Venus, the Venera IV measurements closely fit both the pressure and temperature profiles expected at that altitude when Mariner V data is projected to the surface. Venus surface pressure, then, appears to be more than 75 Earth atmospheres and surface temperature greater than 900 degrees F.

This is consistent also with temperature estimates derived from passive radio astronomy and with the results of the radiometer experiment conducted by Mariner II in 1962 when the Venus surface temperature was found to be a surprisingly high 800 degrees F.

A pressure 75 times that of the Earth's atmosphere is equivalent to the pressure experienced at an ocean depth of 2550 feet. The 900-degree temperature estimate exceeds the heat required to melt lead and zinc.

The Kliore/Cain article appears in the current issue of the Journal of Atmospheric Sciences, a publication of the American Meteorological Society. The special issue, devoted entirely to the Venusian atmosphere, contains reports from American and Soviet authors and includes the Mariner V and Venera IV observations as well as the radar and radio astronomy readings.