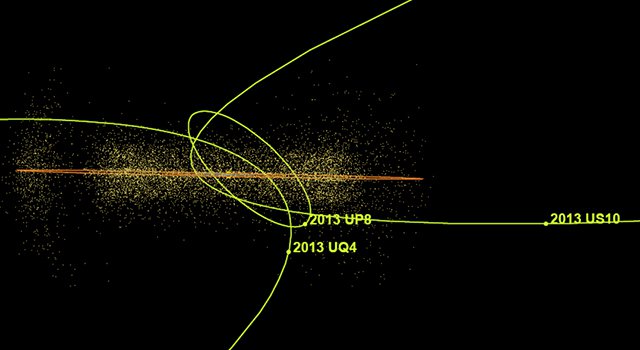 The orbits of 2013 UQ4, 2013 US10 and 2013 UP8 are shown as viewed from within the plane of the solar system (ecliptic plane), which makes clear their highly inclined orbits relative to Earth's orbit.
Credit: NASA/JPL-Caltech 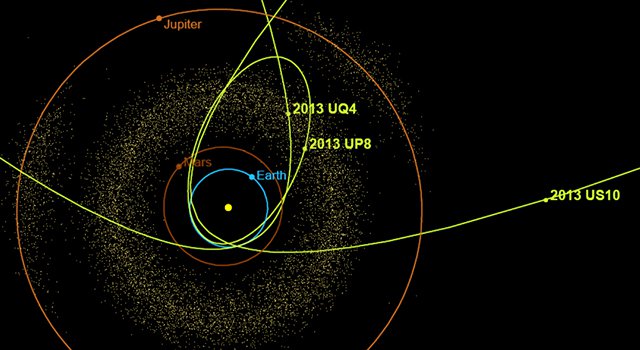 The orbits of 2013 UQ4, 2013 US10 and 2013 UP8 are shown in a view looking down on the plane of the solar system. While 2013 US10 and 2013 UP8 orbit the sun in a counter clockwise direction (so called "direct" orbits like all the planets and most asteroids), 2013 UQ4 orbits in a clockwise (retrograde) direction. The positions of the asteroids and planets are shown for Nov. 5, 2013. The positions of other large asteroids in the belt between the orbits of Mars and Jupiter and the so-called Trojan asteroids that lead and follow Jupiter in its path about the sun are also shown for that date, but their sizes are not shown to scale so the density of these objects in these areas is greatly exaggerated. The orbital periods for 2013 US10 and 2013 UP8 are 6.2 and 4.1 years respectively. The orbital period for 2013 UQ4 is currently very uncertain, but is likely to be a several hundred years.
Credit: NASA/JPL-Caltech

While initial reports from the Minor Planet Center in Cambridge, Mass., categorized object 2013 US10 as a very large near-Earth asteroid, new observations now indicate that it is, in fact, a long-period comet, and it is now designated C/2013 US10 (Catalina). The comet was discovered by the Catalina Sky Survey near Tucson, Ariz., on Oct. 31, 2013, and linked to earlier pre-discovery Catalina observations made on Sept. 12. The initial orbit suggested this object is a large, short period, near-Earth asteroid, as reported here yesterday. An updated orbit, issued today by the Minor Planet Center, removed the September 12 observations that belong to another object and include earlier pre-discovery August and September observations made by the Catalina Sky Survey, the ISON-HD observatory in Russia and Hawaii's Pan-STARRS group. The new orbit indicates that this object is in a long-period, near parabolic orbit about the sun. Furthermore, observations made last night at the Canada-France-Hawaii telescope indicate the object is showing modest cometary activity, which means that yesterday's rough estimate for the object's size (about 12 miles, or 20 kilometers) must now be completely revised. A new size estimate is not yet available, but the object could very well be much smaller than yesterday's estimate.

Two surprisingly large Near-Earth Asteroids have been discovered in just the last week or so, as well as a third moderately large asteroid which, surprisingly, has also gone undetected until now, even though it can pass close enough to Earth to be classified as "potentially hazardous." Not since 1983 has any near-Earth asteroid been found as large as the approximately 12-mile (20-kilometer) size of the two new large ones. In fact, there are only three other known near-Earth asteroids that are of comparable size or larger than the two new large ones.

It is important to note that none of these three new large near-Earth asteroids can come close enough to Earth to represent a near-term threat to our planet.

The first of the new large near-Earth asteroid discoveries is named 2013 UQ4, and it is perhaps the most unusual. This approximately 12-mile (19-kilometer) wide object was spotted by the Catalina Sky Survey on Oct. 23 when the asteroid was 270 million miles (435 million kilometers) away from Earth. Not only is this object unusually large, it follows a very unusual, highly inclined, retrograde orbit about the sun, which means it travels around the sun in the opposite direction of all the planets and the vast majority of asteroids.

The only objects usually found in retrograde orbits are comets, which suggests that 2013 UQ4 may be the remains of an old comet that no longer possesses the near-surface ices required for it to become active while near the sun. Comets that have exhausted most, or all, of their volatile ices do not spew dust during sweeps through the inner-solar system like their less-seasoned, more hyperactive space kin. Without the telltale comet tails or atmospheres, dead comets look like, and in fact for all practical purposes are, asteroids.

As reported on Circular No. 9262 of the International Astronomical Union, the Massachusett's Institute of Technology's Richard Binzel, David Polishook and Rachel Bowens-Rubin observed this object on October 31 with NASA's 3-meter Infrared Telescope Facility in Hawaii and determined this object belongs to the so-called X-type spectral class and exhibits no obvious comet-like activity. This implies about a 4 percent reflectivity, from which they estimate a diameter of approximately 12 miles (19 kilometers).

The second very large near-Earth object, named 2013 US10, was discovered on October 31 by the Catalina Sky Survey. While the reflectivity of this object has not yet been determined, and hence its diameter is still uncertain, it is also likely to be about 12 miles (20 kilometers) in size. Only three near-Earth asteroids (1036 Ganymed, 433 Eros and 3552 Don Quixote) are of comparable size or larger.

Why has it taken so long to discover these large near-Earth asteroids? The delay in discovering 2013 UQ4 is more easily understood because it has a very long orbital period that has kept it out of Earth's neighborhood for centuries. But the delayed discovery of 2013 US10 is a bit harder to explain, since current population models suggest that almost all near-Earth asteroids of this size and orbit should have already been found. A contributing factor may be that this object's orbit does not allow it to get closer than 50 million miles (80 million kilometers) of Earth's orbit, so the asteroid seldom gets close enough to Earth to become easily detectable. However, NASA-supported telescopic surveys are now covering more sky and looking "deeper" than they ever have before, and in fact, 2013 US10 was first detected where it spends much of its time, well beyond the orbit of Jupiter.

The third of the recent discoveries is the approximately 1.2-kilometer (two-kilometer) near-Earth asteroid 2013 UP8, found on Oct. 25 by the Pan-STARRS group in Hawaii. This asteroid can approach quite close to Earth's orbit, within 3.4 million miles (5.5 million kilometers), which makes it a "potentially hazardous asteroid" (PHA). 2013 UP8 is in the top 5th percentile of the largest PHAs, most of which were found much earlier during NASA's asteroid survey program. Like the other new discoveries, this asteroid has gone undetected for a long time because it has not approached Earth closely for decades. But the increasingly capable NASA-supported asteroid surveys finally found this object while it was still at a large distance from Earth, well beyond the orbit of Mars.