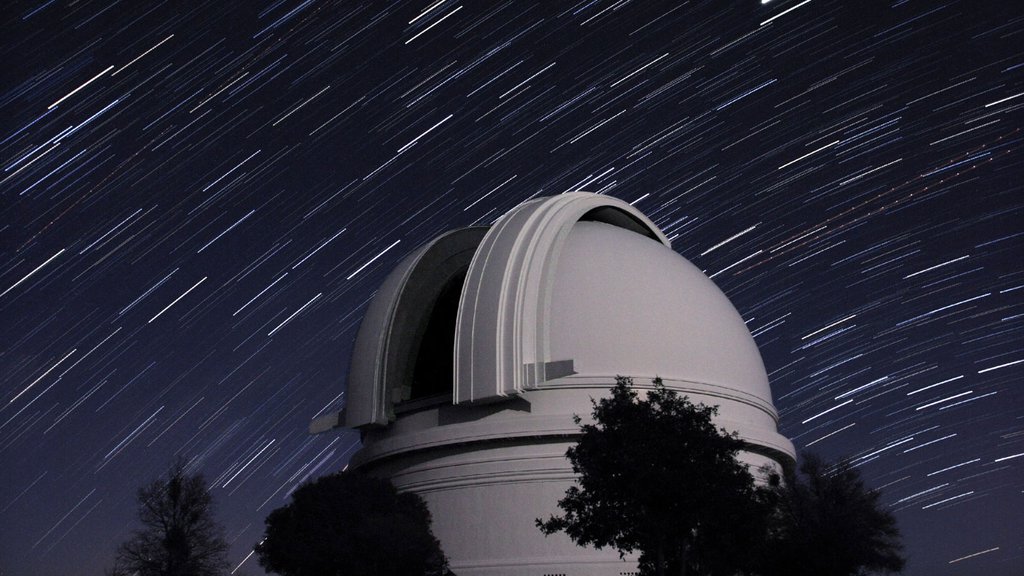 Dedicated in 1948, the 200-inch Hale Telescope was the largest effective telescope in the world until 1993.
Credit: Caltech/Palomar

Take a front-row seat as scientists test a powerful new tool in the search for planets beyond our solar system.

Before astronomers use a new tool or technology, they must test every aspect of it to make sure it is ready to turn starlight into tantalizing information about the cosmos.

On Feb. 2, 2018, a handful of researchers began testing an instrument called the New Mexico Exoplanet Spectroscopic Survey Instrument, or NESSI, at the historic 200-inch Hale Telescope at Palomar Observatory in Southern California. NESSI is designed to look at the atmospheres of exoplanets, or planets beyond our solar system.

Here's what that first night of testing was like:

4:00 p.m. The NESSI team united for an early dinner at the dormitory called "the monastery" before driving to the telescope. Principal investigator Michelle Creech-Eakman, who grew up under the clear skies of North Dakota, has spent hundreds of nights at Palomar, so she's familiar with the overnight-astronomy lifestyle. Working there as a Caltech postdoctoral researcher, she once accidentally scared a herd of cows in her quests to tame the mysteries of stars and planets.

5:20 p.m. Sunset. The telescope dome, with proportions similar to Rome's Pantheon, opened, synchronized with the theme from "2001: A Space Odyssey," which Rob Zellem, an astrophysicist at NASA's Jet Propulsion Laboratory, jokingly played on his phone. Afterward, he climbed up to the outdoor catwalk to admire the fiery sky for a few minutes.

5:36 p.m. The team convened in the observing room, adjacent to the dome, taking images called "sky flats" to calibrate NESSI using the light of the sky itself. This is so the team can understand how each pixel of NESSI's detector responds to incoming light. If astronomers spot inconsistencies from pixel to pixel, they can adjust for them and subtract out "noise" when making real observations.

Around 5:49 p.m. NESSI's detectors were exposed to the sky at Palomar for the first time. To the untrained eye it looked like black-and-white static with lines through it on an old TV.

Around 6:10 p.m. NESSI saw its first star, Alpha Perseus. A round of applause resounded in the observation room. Zellem's excitement was palpable. "It's one thing to see it in a lab; it's another to see a real star," he said.

But the team was just getting started. NESSI's many components needed to be calibrated and examined - so many that Creech-Eakman didn't expect to get actual data from a star tonight. Zellem opened a bag of turkey jerky for the long night ahead.

NESSI at first delivered a strange pattern of pixels on Zellem's computer screen. The researchers examined a star called Eta Aurigae to compare its appearance to Alpha Perseus in NESSI's field of view and tried to figure out whether the changes in brightness were due to NESSI's detector or to the thin clouds rolling in.

8:50 p.m. The team got an error message when they tried to get a stellar spectrum, the array of lines corresponding to different wavelengths of light a star produces. When they took the image again, it worked - but not as expected. With clouds coming in and out of view, getting a clear image would prove difficult.

The troubleshooting continued through the next hour. "I think we're missing something fundamental," Creech-Eakman said.

Just before 11 p.m. Creech-Eakman and Zellem decided on a new target: a star called Capella. It's here they realized that the star needed to be in a different part of NESSI's field of view. With a 10-second exposure, they were at last able to see part of a spectrum. And as they adjusted the positioning of the star with respect to NESSI, the full spectrum came into view. The team exploded in applause.

Around 2 a.m. Because of clouds, they stopped and ceded the rest of the time to another group of astronomers. By then, the NESSI team had noted a variety of unexpected behavior from the instrument that they would need to investigate in the light of day.

As with all new technologies, NESSI presented its researchers with challenges that had no immediate solutions, and there's no manual to follow or help line to call. But the evening was a tremendous success in taking stock of NESSI's components and functions. After an additional year-and-a-half of tweaking, testing and observing, NESSI observed its first exoplanet signatures on Sept. 11, 2019, proving its readiness for further studies.

Between the picturesque mountaintop setting and the engineering marvel of the "Big Eye" Hale Telescope itself, Creech-Eakman doesn't mind making more trips to Palomar Observatory. It's been a special place for her since her Caltech days, when she worked there on someone else's experiment.

"My father had a small telescope that he had built, and I got to use that when I was little. He had made the mirrors himself - all of it," she said. "To bring my own instrument to a place like this is - I really don't have words."