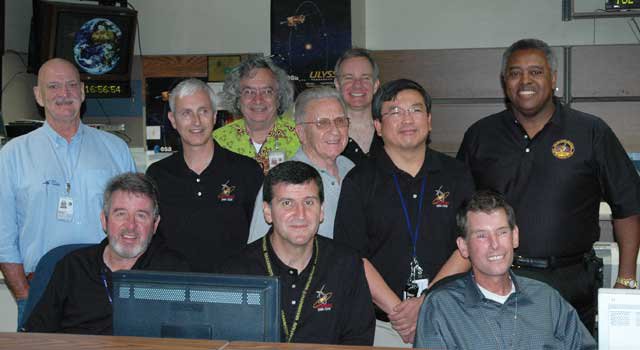 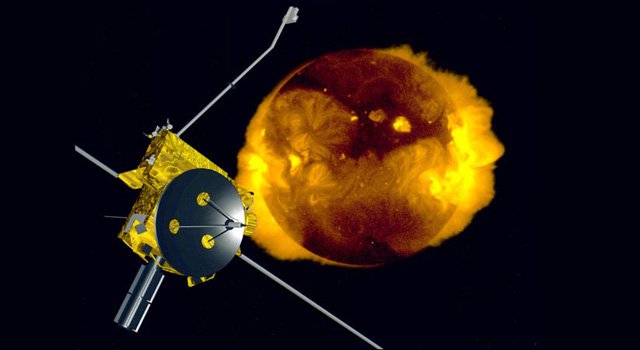 Ulysses, a joint NASA and European Space Agency mission, officially ceased operations today, after receiving commands from ground controllers to do so.

PASADENA, Calif. -- Ulysses, a joint NASA and European Space Agency mission, officially ceased operations today, after receiving commands from ground controllers to do so.  The spacecraft, which operated for more than 18 years, charted the unexplored regions of space above the poles of the sun.

When space shuttle Discovery launched Ulysses on Oct. 6, 1990, it had an expected lifetime of five years. The mission gathered unique information about the heliosphere, the bubble in space carved by the solar wind, for nearly four times longer than expected.

"This has been a remarkable scientific endeavor," said Richard Marsden, Ulysses mission manager and project scientist at the European Space Agency. "The results Ulysses obtained have exceeded our wildest dreams many times over."

Ulysses made nearly three complete orbits of the sun. The probe revealed for the first time the three-dimensional character of galactic cosmic radiation, energetic particles produced in solar storms and the solar wind. Not only has Ulysses allowed scientists to map constituents of the heliosphere in space, its longevity enabled them to observe the sun over a longer period of time than ever before.

"The sun's activity varies with an 11-year cycle, and now we have measurements covering almost two complete cycles," said Marsden. "This long observation has led to one of the mission's key discoveries, namely that the solar wind has grown progressively weaker during the mission and is currently at its weakest since the start of the Space Age."

In addition to measuring the solar wind and charged particles, Ulysses instruments measured small dust particles and neutral gases from local interstellar space that penetrate into the heliosphere. Ulysses had an unprecedented three chance encounters with comet tails, registered more than 1,800 cosmic gamma-ray bursts, and provided findings for more than 1,000 scientific articles and two books.

"The breadth of science addressed by Ulysses is truly astonishing," said Ed Smith, Ulysses project scientist at NASA's Jet Propulsion Laboratory in Pasadena, Calif. "The data acquired during the long lifetime of this mission have provided an unprecedented view of the solar activity cycle and its consequences and will continue to keep scientists busy for many years to come."

Ulysses' successes have not been confined to scientific data. The extended mission presented significant challenges to the NASA-European operations team. In particular, critical parts of the spacecraft became progressively colder with time. In recent years, a major effort was needed to prevent the onboard hydrazine fuel from freezing. The operations team continually created methods to allow the aging space probe to continue its scientific mission.

Earlier this month, the Ulysses mission team received a NASA Group Achievement Award. Another milestone was reached on June 10 when Ulysses became the longest-running ESA-operated spacecraft, overtaking the International Ultraviolet Explorer which logged 18 years and 246 days of operations.

"The Ulysses team performed exceptionally by building and operating a research probe that would return scientific data for analysis no matter what challenges it encountered," said Arik Posner, Ulysses program scientist at NASA Headquarters in Washington.  "The knowledge gained from Ulysses proves what can be achieved through international cooperation in space research."

ESA Ulysses Mission Operations Manager Nigel Angold points out that more than a year ago, "We had estimated Ulysses would not survive further than July 2008. However, the spacecraft didn’t stop surprising us and kept working a full year, collecting invaluable science data. It's nice to be going out in style."

After the spacecraft was placed into low Earth orbit in 1990, a combination of solid fuel motors propelled Ulysses toward Jupiter. Ulysses swung by Jupiter on Feb. 8, 1992. The giant planet's gravity bent the spacecraft's flight path southward and away from the ecliptic plane, putting the probe into a final orbit that would take it over the sun's south and north poles.

The European Space Agency's European Space Research and Technology Centre and European Space Operations Centre managed the mission in coordination with the Jet Propulsion Laboratory. Ulysses is tracked by NASA’s Deep Space Network. A joint ESA/NASA team at JPL oversaw spacecraft operations and data management. Teams from universities and research institutes in Europe and the United States provided the 10 instruments on board.

More information about the mission is available at http://ulysses.jpl.nasa.gov .
› Ulysses site